Japanese American Internment Camp Clean Up A Time For Descendants To Remember, Reflect 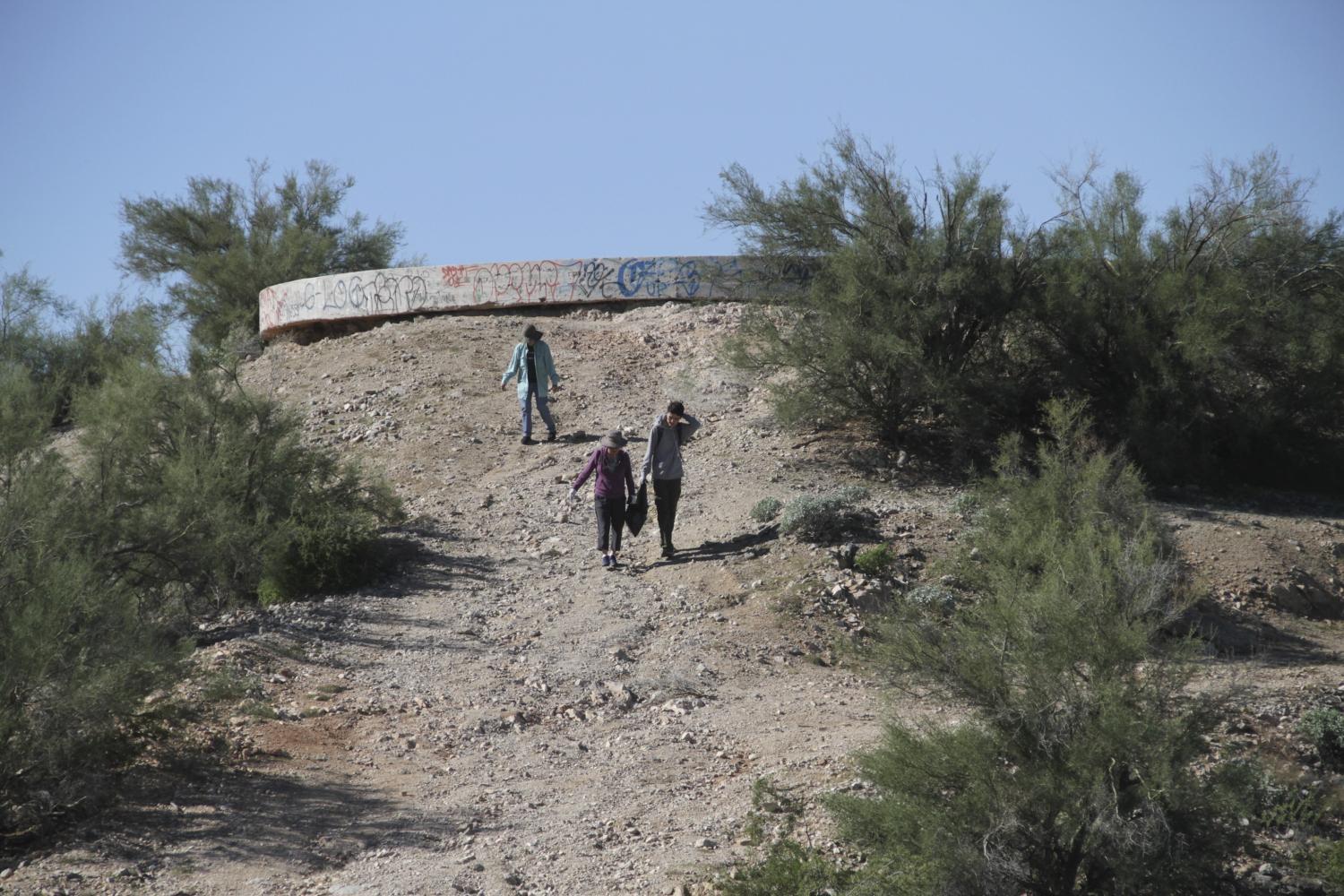 Mariana Dale/KJZZ
“I’ve learned a lot," said Kathleen Wahl. "I’ve learned there’s been a lot hardship for these relatives and they never really talked about it.”

At one point during World War II, more than 13,000 Japanese American people were incarcerated about an hour south of Phoenix.

There’s a small monument to the camp at a Chandler park and a newly opened exhibit at the Chandler Museum, but very few people ever visit the camp's remains.

One opportunity, however, is an annual cleanup organized by the Arizona Chapter of the Japanese American Citizens League which has become a pilgrimage, of sorts, for descendants of internees.

We trundle down a dirt road in a caravan of at least a dozen cars, passing rows of carefully cultivated vegetation, before stopping at the base of two hills surrounded by scrubby desert.

All that’s left of the Gila River War Relocation Center are a few concrete foundations peeking out from under the creosote. 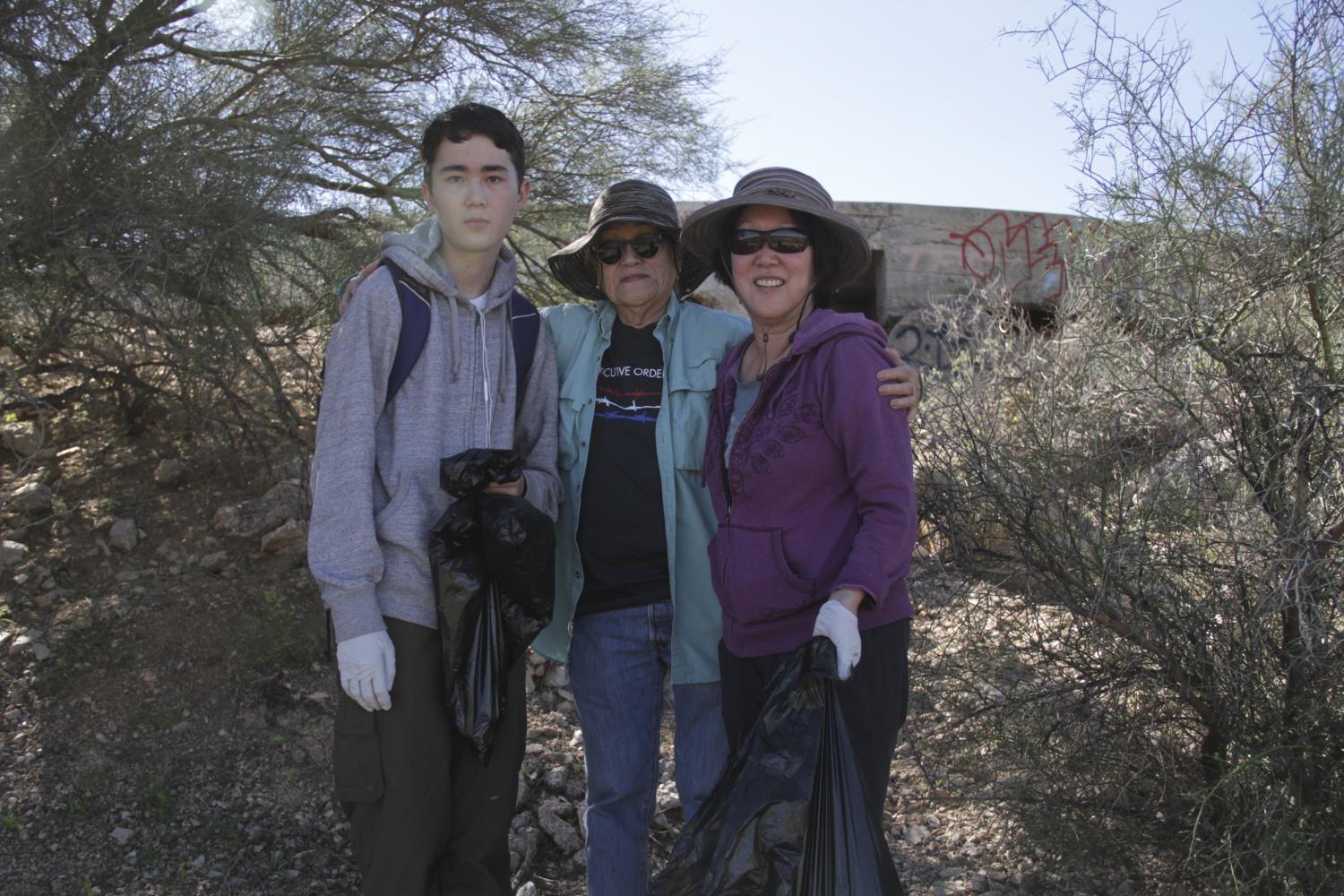 Close by is Block 60, the barracks Norma Yokota’s family lived in.

“I don’t remember much about it,” said Yokota, who was just a kid when her family was ripped from their Long Beach home and taken to Arkansas and then Arizona.

“I knew it was desolate and dust storms all the time and the tumbleweeds used to come to the barracks.”

Today is the first time she’s returned to this strip of Arizona desert since her family was freed from incarceration in 1943. The words "Executive Order 9066" stretch across her shirt, a reference to the presidential executive order that changed her life and that of 122,000 other people of Japanese heritage in 1942.

She’s one of about 50 people here today. The official reason is to pick up trash, but the day feels more like a pilgrimage. Nearly everyone is related to someone who was incarcerated here.

A federal commission found that "prejudice, war hysteria and a failure of political leadership" led to the creation of the camps.

The thought at the time was that people with Japanese heritage living on the West Coast could sabotage or spy on America.

MORE: Q&AZ: What Is The History Of Japanese American Internment Camps In Arizona? 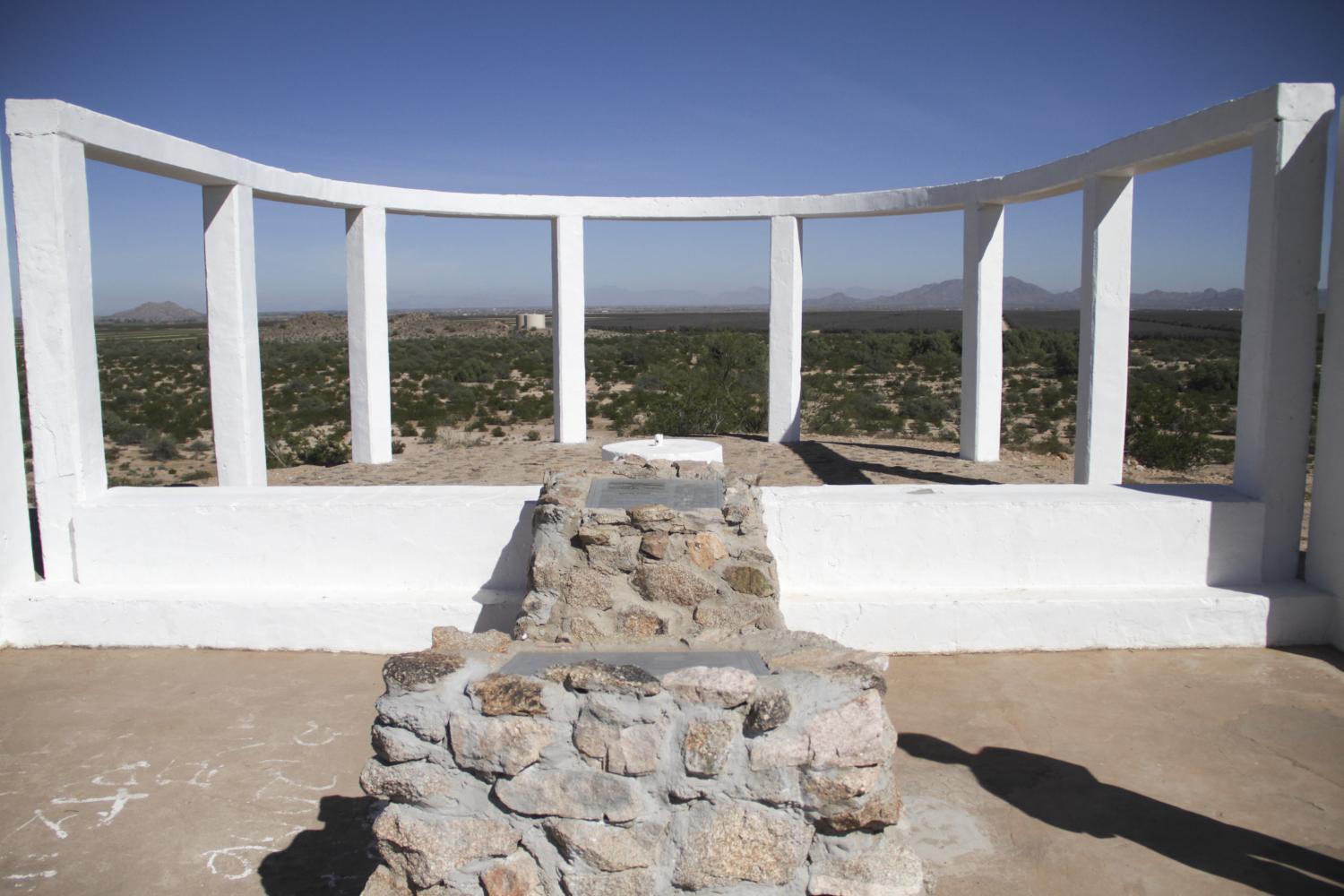 Mariana Dale/KJZZ
A plaque on the memorial built at the Gila River Camp notes that by the end of World War II, more than 1,100 internees had volunteered to serve in the U.S. military.

The first thing the group does once they assemble at the site is raise their right hands to their hearts and recite the Pledge of Allegiance.

“If you see a stick and the stick moves...” Cue nervous laughter.

In the shade of a Palo Verde tree, I talk to Kathleen Wahl, the daughter of Norma Yokota. Shards of broken glass and cans clink together in her garbage bag.

She flew in from California the night before with her son and her mother. The woman at the rental car counter hadn’t even realized there was Japanese internment camps in Arizona.

“I didn’t grow up hearing about it,” Wahl said. “That’s the unfortunate thing.”

Like many, once they left, Yokota’s family worked to move on. Wahl sought out the information on her own.

“I’ve learned there’s been a lot hardship for my relatives and they never really talked about it,” Wahl said.

There are federal grants awarded every year to build and maintain sites that preserve and share the history of “Japanese confinement.” The National Park Service has given 206 grants in the last 10 years, including to groups working in Arizona. 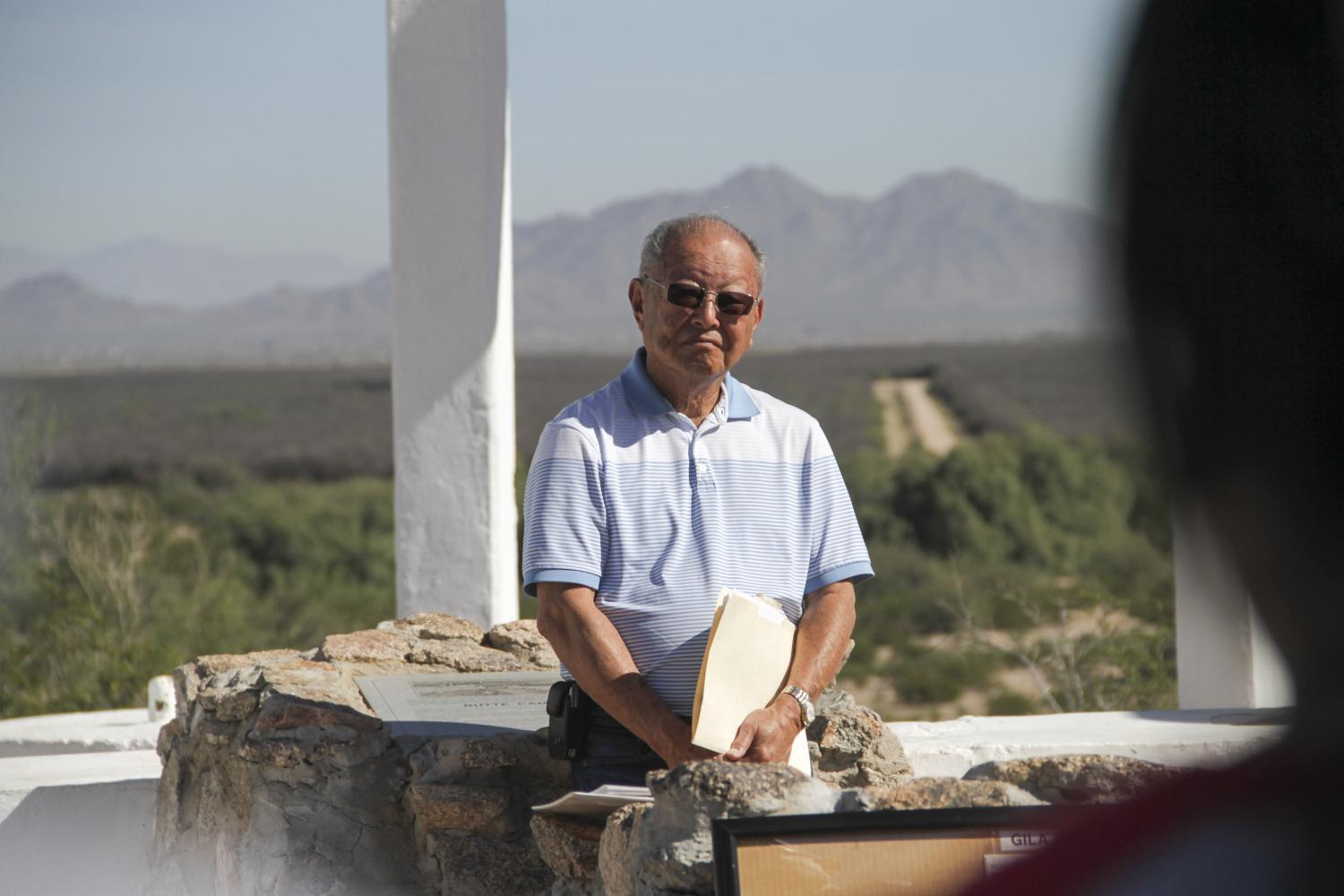 Mariana Dale/KJZZ
Richard Matsuishi was also incarcerated in Arizona, albeit in the Poston camp near Parker. On this day, someone asked him what he wished people would have done at the time. “I think they should be doing the same thing they’re doing now. Speaking out.”

There are ten internment camp sites around the country, including two in Arizona: Gila River and Poston near Parker.

Gila River is the ninth site Wahl has visited with her son. Nilson is 16, and with some cajoling from his mom and grandma, agrees to talk to me.

“I guess knowing family history is important, yeah,” he said.

I ask whether he could imagine what it would be like if he didn’t know anything about his history.

His grandmother tells me that she’s “very surprised, very pleased,” he’s taken such an interest in his family’s past.

Even those without family or heritage tied to Gila River are trying to use this experience to help find their place in the world.

"Man, as just a young millennial who’s white, honestly, I want to learn as much as I can,” said Miles Martin, an ASU student. "I think there’s a lot of white people that want to do the right thing, but we need to learn and be a little embarrassed and figure out the truth of things.”

He did a report for class about Japanese internment.

“You can research anything you want on the Internet nowadays, but actually having to walk out here and realize that this was the weather that people woke up to — and stepping on the ground and seeing what people had to experience, is just always going to be completely different,” Martin said.

After a few hours picking up trash the group gathers near white concrete arches built to commemorate the Japanese American men who left the camps to fight for the U.S. in World War II. 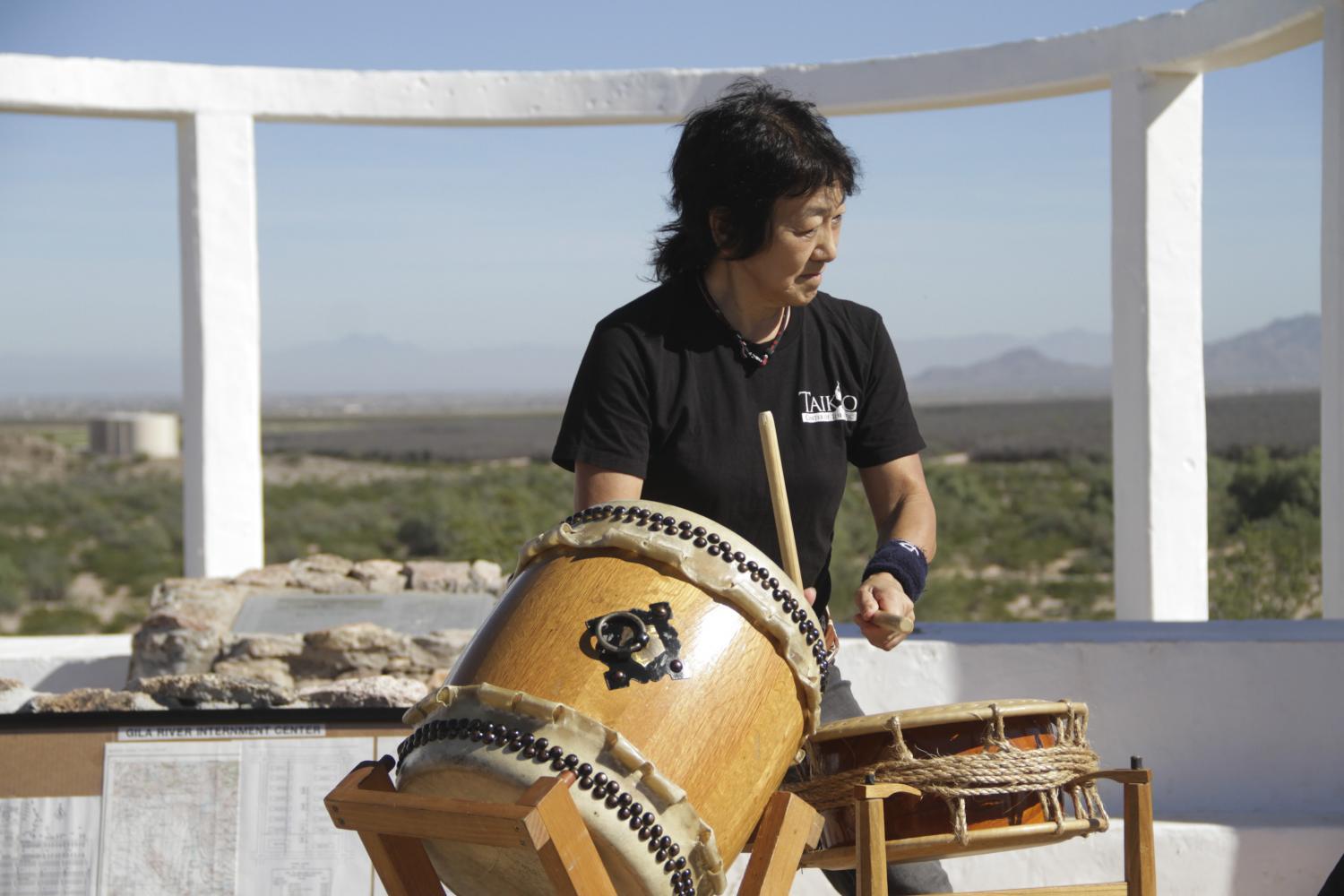 Mariana Dale/KJZZ
“Today was dedicated to the internees of Gila River," Endo said. “And just just trying to feel the spirit of the and the mana, we say in Hawaii, the mana, the power, of the people who are here.”

Among the volunteers is a group of Taiko drummers from Hawaii. A flute melody gives way to the rhythmic, pounding thumps of a piece called Spirit Sounds.

"Today was dedicated to the internees of Gila River," Chizuko Endo said afterward. "And just trying to feel the spirit of the mana — we say in Hawaii, the mana, the power — of the people who are here."

Endo played the shime-daiko and the Sumō-daiko drums. She’s the first in her family to return to the place where her mother was incarcerated.

Endo said she’s appreciative of the sacrifices they made to give her the life she has now.

The day ends with time and space for every person at the clean-up to share a remembrance, and many speak the names of those who were incarcerated where they now stand.

There are seven cousins from California, including Grant Ishibashi. All but one made the trek in the same car.

“Just looking at it hits the heart,” Ishibashi said, peering at the desert around him.

The place brings back bits and pieces of stories their family told, like what happened on December 7, 1941 after Pearl Harbor was bombed.

“They were at a family wedding and they had come rushing home and gramma says close all the shades and darken everything up,” said Marilyn Nakagawa, one of the seven cousins.

Their grandfather gave up his grocery store because of the internment.

“Not pleasant memories, but I mean, it happened,” Nakagawa said.

Remembering For The Future

Matthew Weisbly grew up learning about his dad’s family in the Auschwitz-Birkenau concentration camp but it wasn’t until just before his Bar Mitzvah that he heard about his mother’s relatives held captive in Gila River.

“Having gone 13 years with never hearing about what happened here in the U.S., it was a jarring moment to say the least,” Weisbly said.

He’s gosei, a 5th generation Japanese American. He’s now writing his college thesis about the 100th Battalion/442nd Infantry Regiment, which was largely comprised of Japanese  American soldiers who fought in World War II. Weisbly estimated this is his sixth or seventh time visiting the site.

“Both coming out here to honor my family and to make sure that people who don’t know this story or people who are born after us grow up learning this story.”

No matter what their background, everyone here today expressed the same desire — that nothing like this ever happen again. 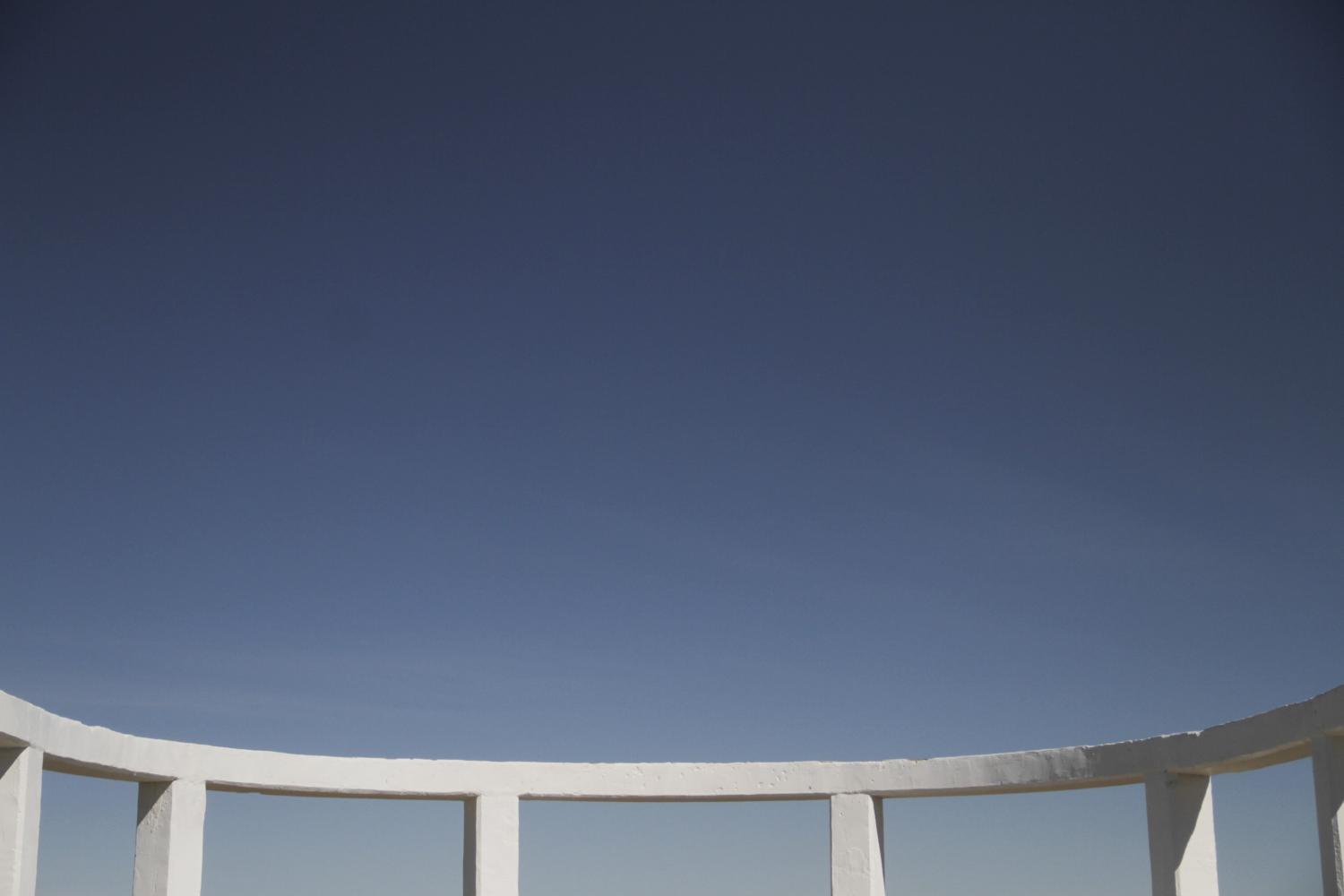 Mariana Dale/KJZZ
"We need to start doing something to honor and respect and keep alive what happened back then,” said Colleen Hayashi, who had family once incarcerated at Gila River. 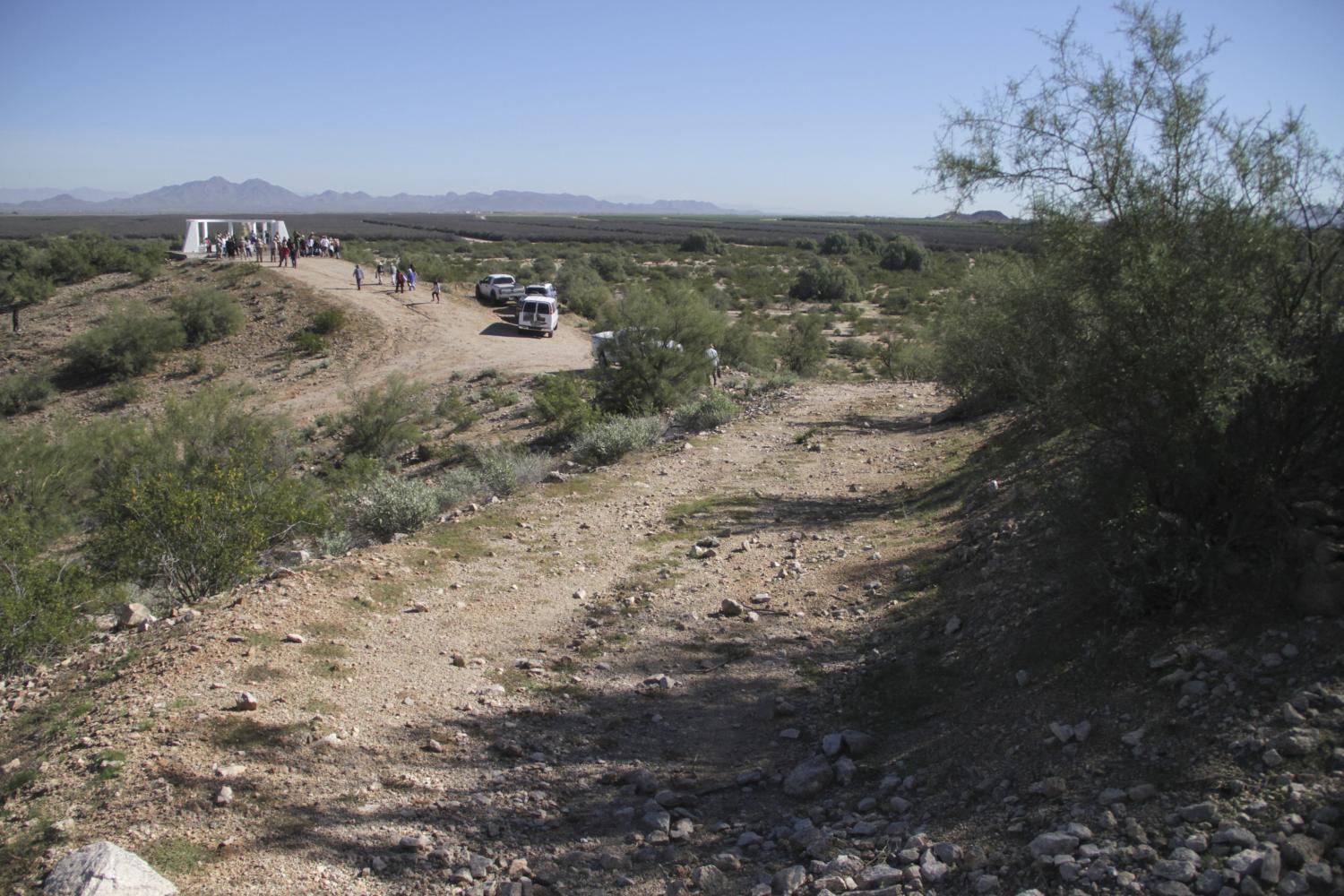 Mariana Dale/KJZZ
At its peak more than 13,000 Japanese American people were held at Gila River.

Fights over education funding and teacher pay have been going on for years in Arizona.