Phoenix 'Skateboard Angels' Ramp Up Efforts For The Holiday Season

After a full day of school, a group of rambunctious, talkative and loud elementary school kids stream onto the playground in south Phoenix. However, when Timothy Ward speaks, he has their rapt attention.

“Alright skaters, have a seat and listen up ‘cause you're really gonna want to hear what I have to say today!” Ward claps his hands, and a second-grader with a missing front tooth loudly shushes his chatty neighbor.

Five days a week, Ward and a volunteer crew of skate enthusiasts load dozens of battered skateboards, helmets and wrist guards into his white pickup truck and head to schools around the Valley to share their skills for an hour or two of skateboarding. 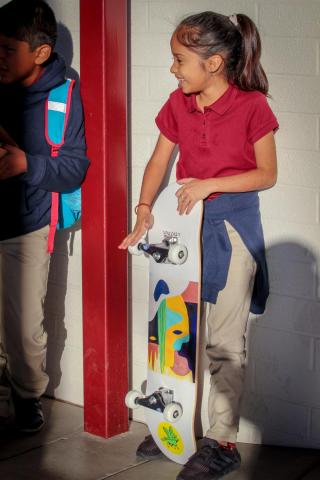 Claire Caulfield/KJZZ
Nine-year-old Valerie Palma beams after getting a skateboard of her own.

He’s been bringing this free after-school program, called Skate After School, to low-income schools since 2013. Ward said it bothered him that the program is only able to visit each school one day a week, so he started looking for a way to give his students skateboards of their own.

“I have three skateboards to give out to skaters today in this group,” Ward says to cheers. But, in typical Skate After School fashion, he never misses an opportunity to share life advice alongside skating tips.

“If you didn't get a skateboard today, we’re still gonna hope for the best for next week and the week after that,” he said. “We’re gonna be really happy for our friends who got their very own skateboards today.”

Ward calls Valerie Palma’s name, and a beaming nine-year-old sprints to the front of the group to grab a board. Next up is 12-year-old Joshua Stine.

“It’s a nice skateboard, it got a cool face on the back,” Stine said.

Stine hasn’t been skating for very long but is quick to mention his plans to practice kickflips, ollies and rail grinds at home. He says he wants to impress Ward, the other volunteers and his friends in the program.

The students have boards in-hand thanks to a collaboration with Cowtown Skateboards, a local skate shop. Skate After School decorated trees in the stores with hand-written cards from the students in the program. Anyone can take a note off the tree and buy a board at the wholesale cost.

This is the second year Skate After School is calling on community members to buy a board for this “Skateboard Angel” initiative. 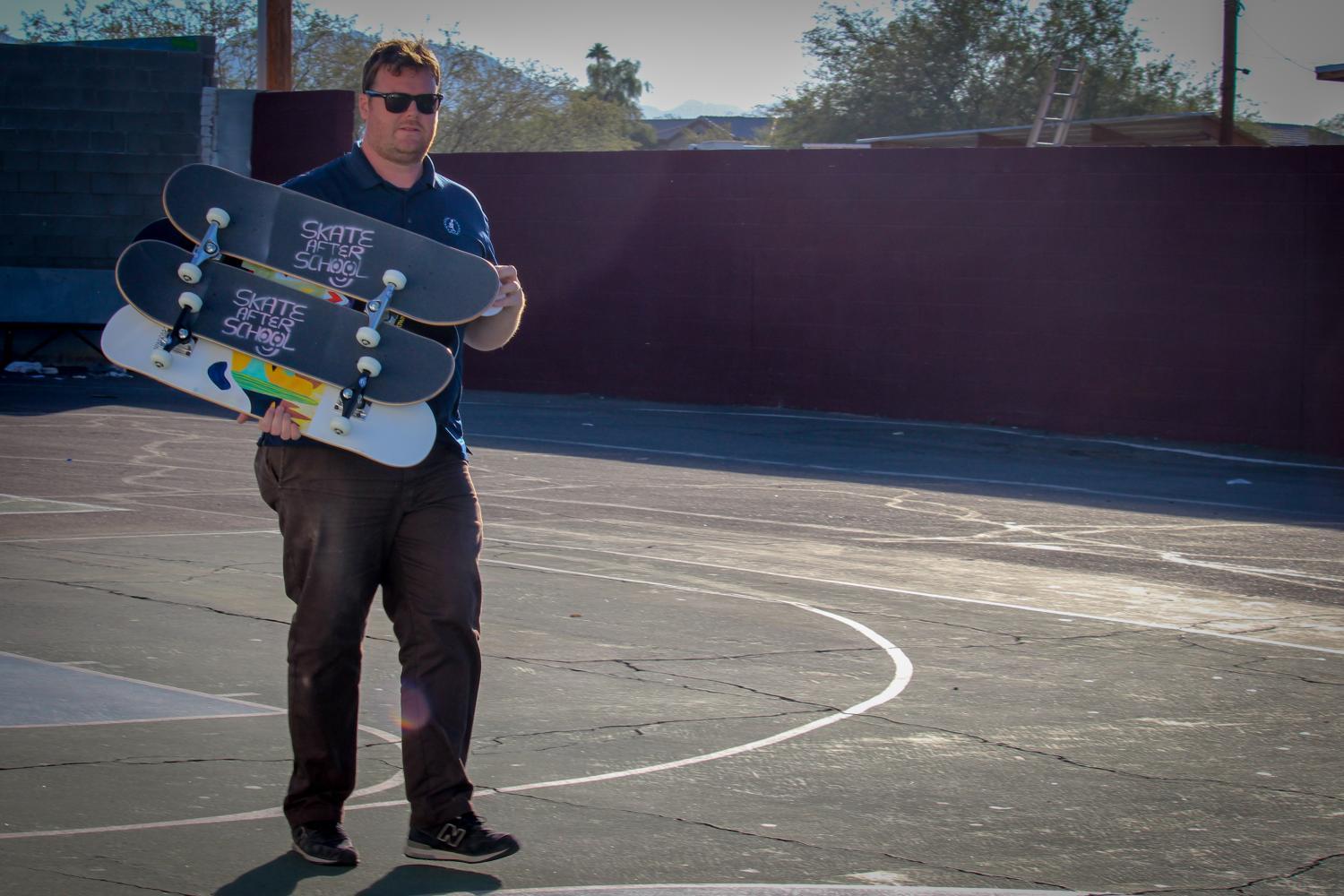 Claire Caulfield/KJZZ
Co-founder Tim Ward carries a stack of brand-new skateboards to give away to students.

“My hope was that we could get 14 total, which would be one for a boy and one for a girl at every school,” Ward said. “Very quickly, it took off.”

They received over 230, which Ward said really surprised him because these aren’t cheap, toy skateboards — they're professional quality.

“The community really stepped up — both skateboarders and also people who have no connection to boarding,” he said.

Doing Everything I Can

Ward has been skateboarding for 20 years and said the activity kept him out of trouble.

One in five American kids are home alone from 3 p.m. to 6 p.m, and adolescents are more likely to commit, and be the victim of crimes in the hours immediately following the last class on school days, according to the U.S. Office of Juvenile Justice and Delinquency Prevention.

“I care about after school programs,” said Ward. “And [skateboarding] is an affordable form of transport and an activity that brings so many benefits.”

Nine-year-old Delanie Daniels hopes that before winter break, someone will pick her card off a Christmas tree at Cowtown Skateboards and buy a board in her name.

“I like skating because, a long time ago, I didn't know how to ride a skateboard so I kept going and trying and trying, and I finally got it,” she said.

Ward’s goal this year is 250 skateboards — enough to cover new students in the program and replace any boards that might have been damaged in the past year.

Cowtown Skateboards said if the community tops that goal, it will give extras to local community centers, foster homes, and Boys and Girls Clubs. 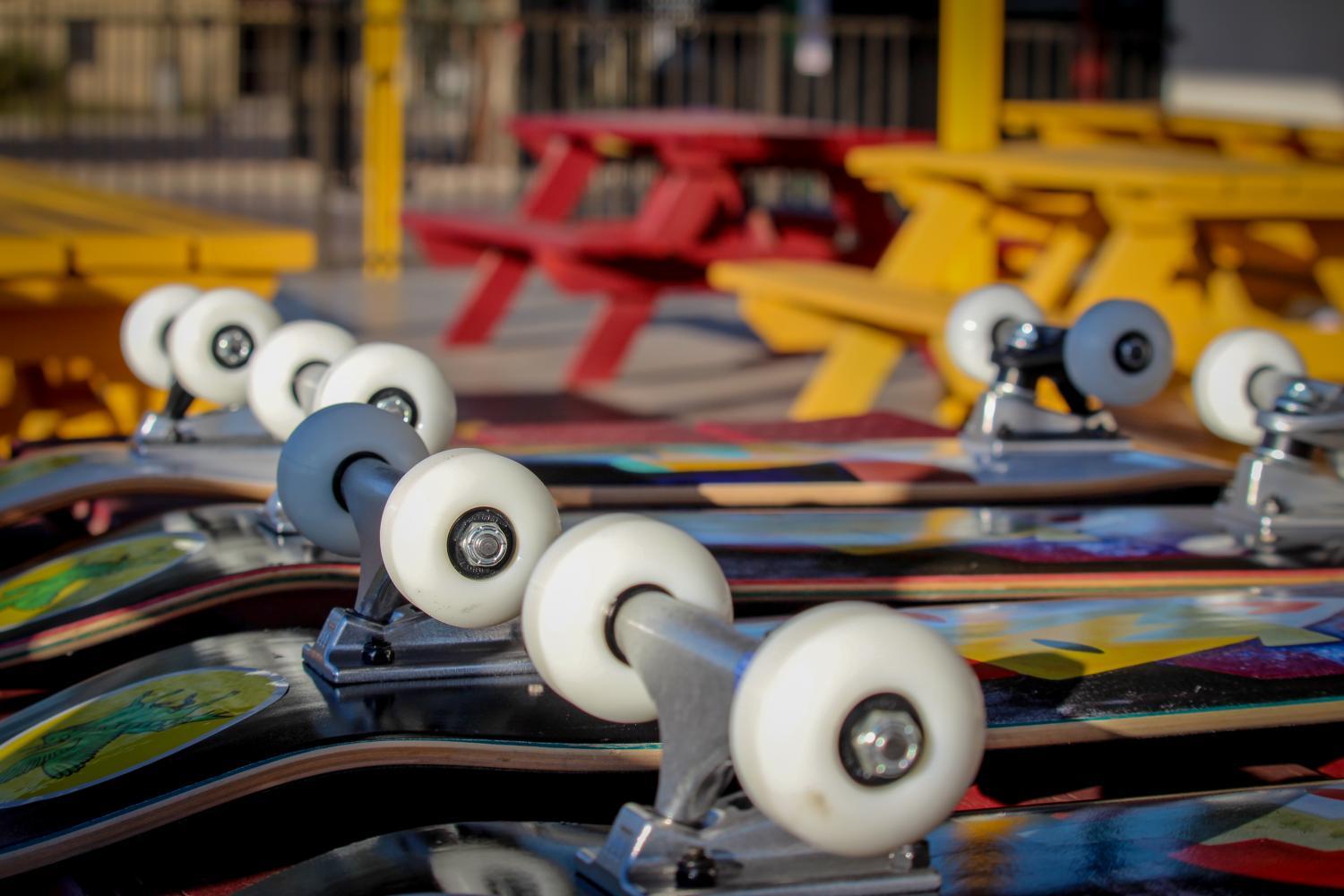 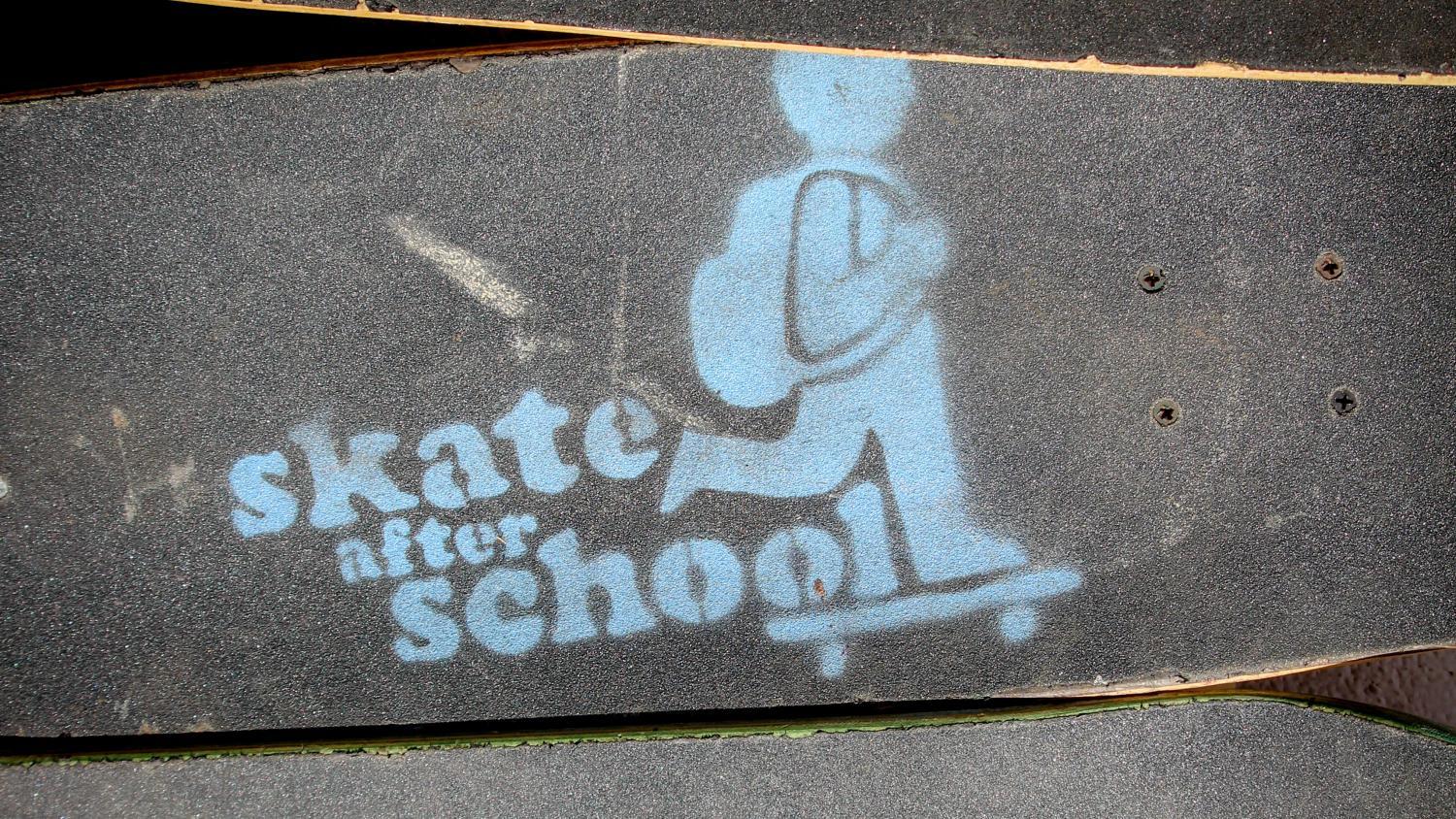 Claire Caulfield/KJZZ
Skateboards used by the program are either gently-used or donated. 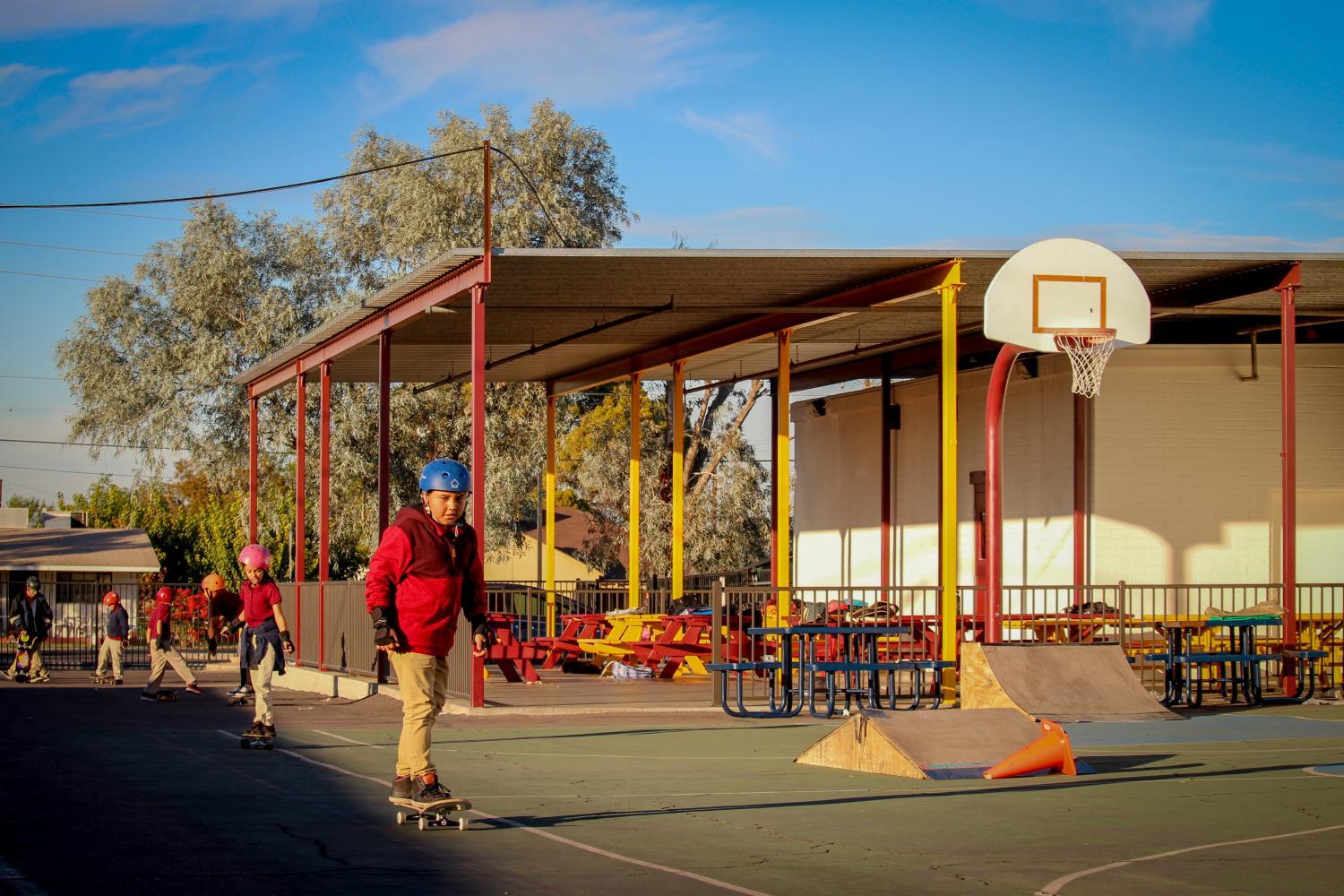 Claire Caulfield/KJZZ
At each Skate After School session, students warm up by skating up and down the length of the playground then practice skills and tricks. 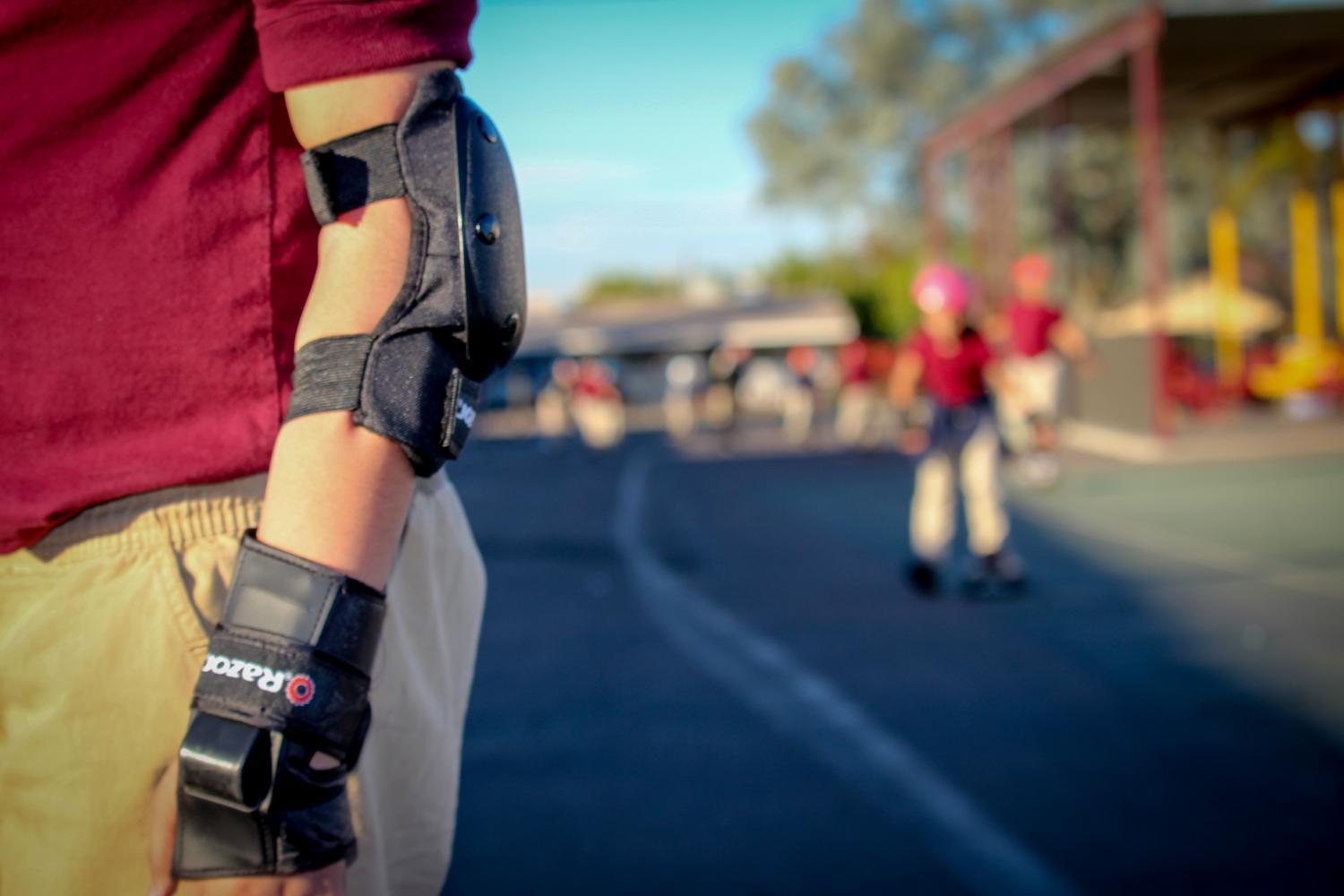 Claire Caulfield/KJZZ
While the Skate After School volunteers and coaches don’t usually don protective gear, students aren’t allowed to participate without wearing pads and helmets, which the program provides. 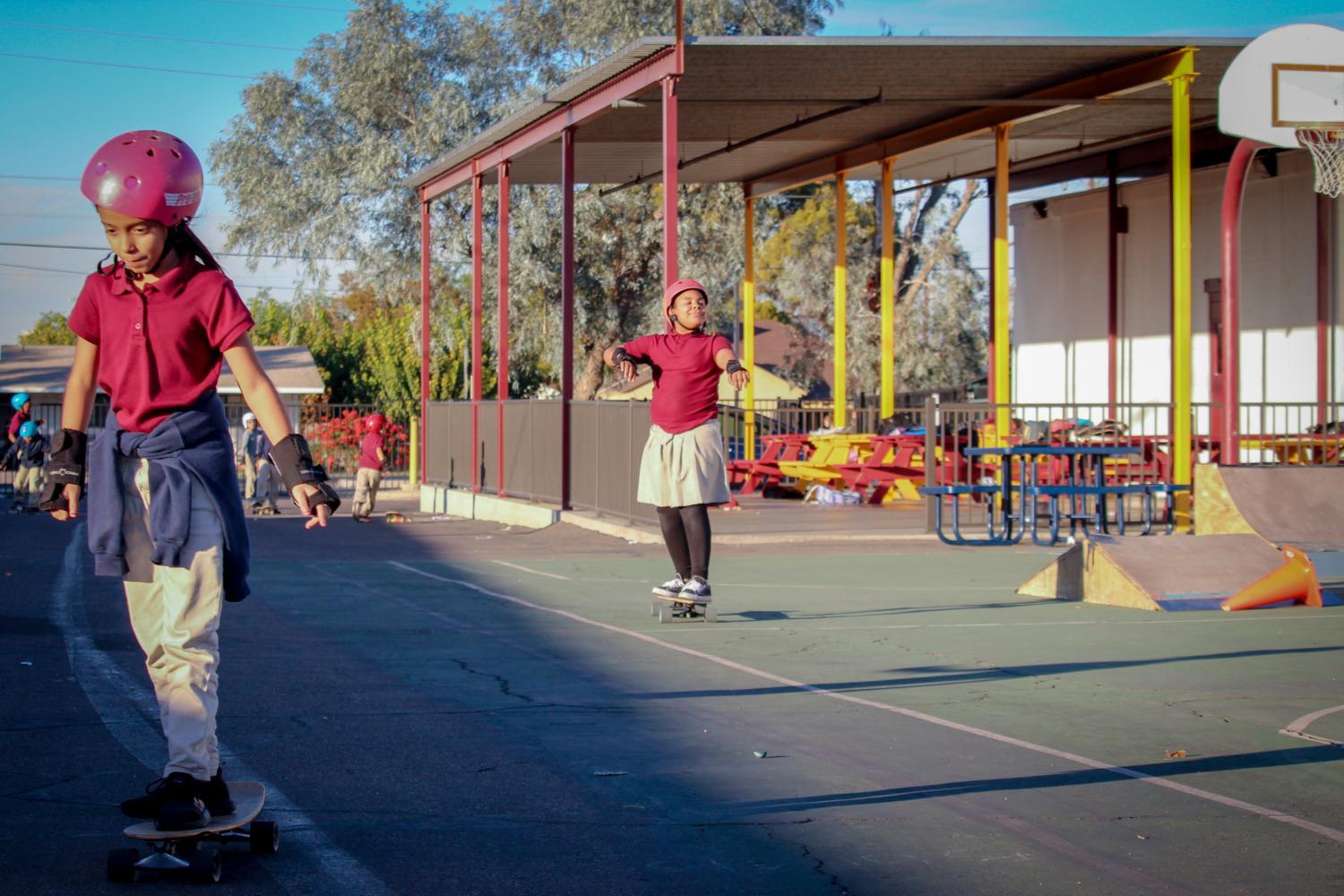 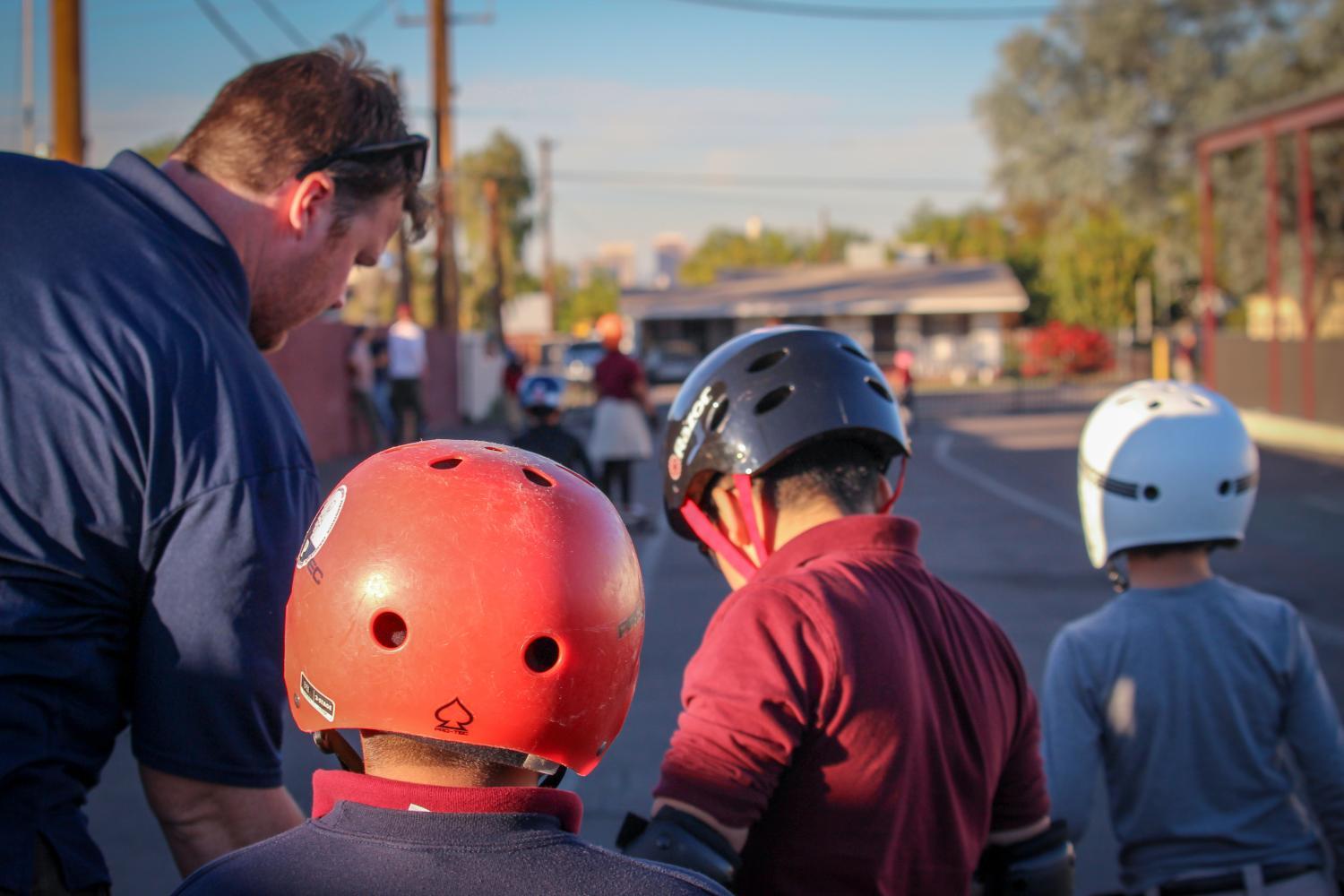 Claire Caulfield/KJZZ
Co-founder Tim Ward preps a student for his the first board-ride of the day. 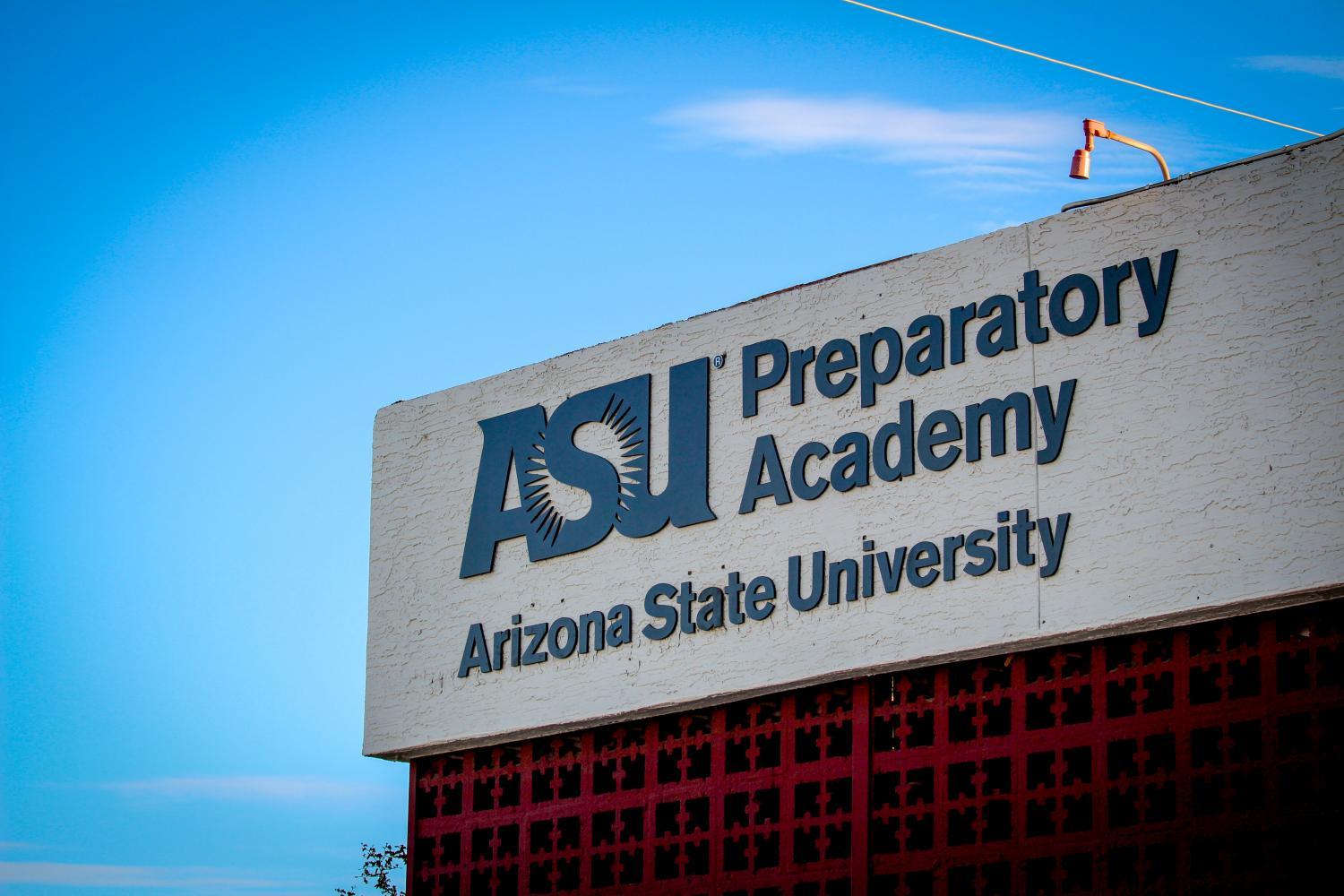 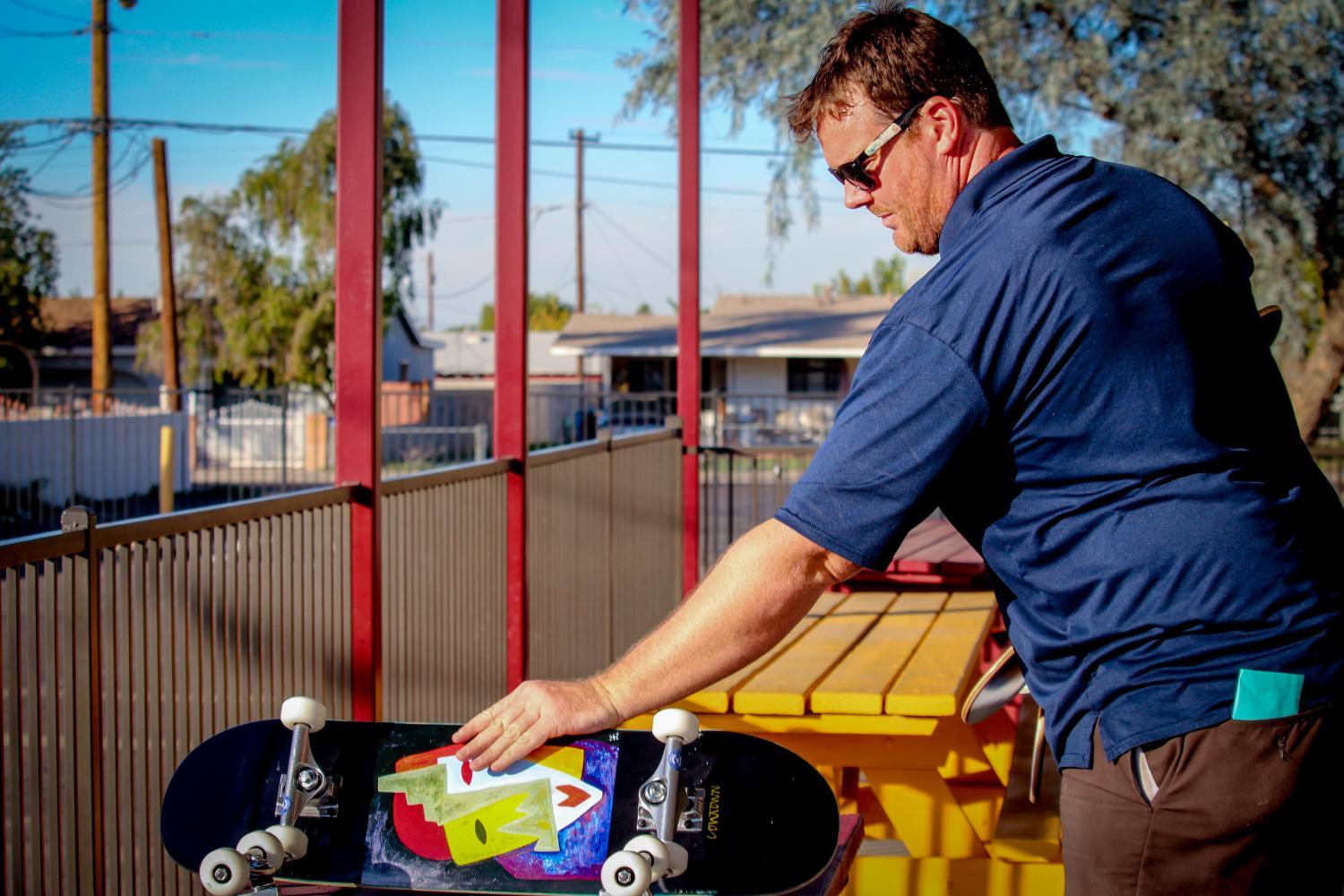 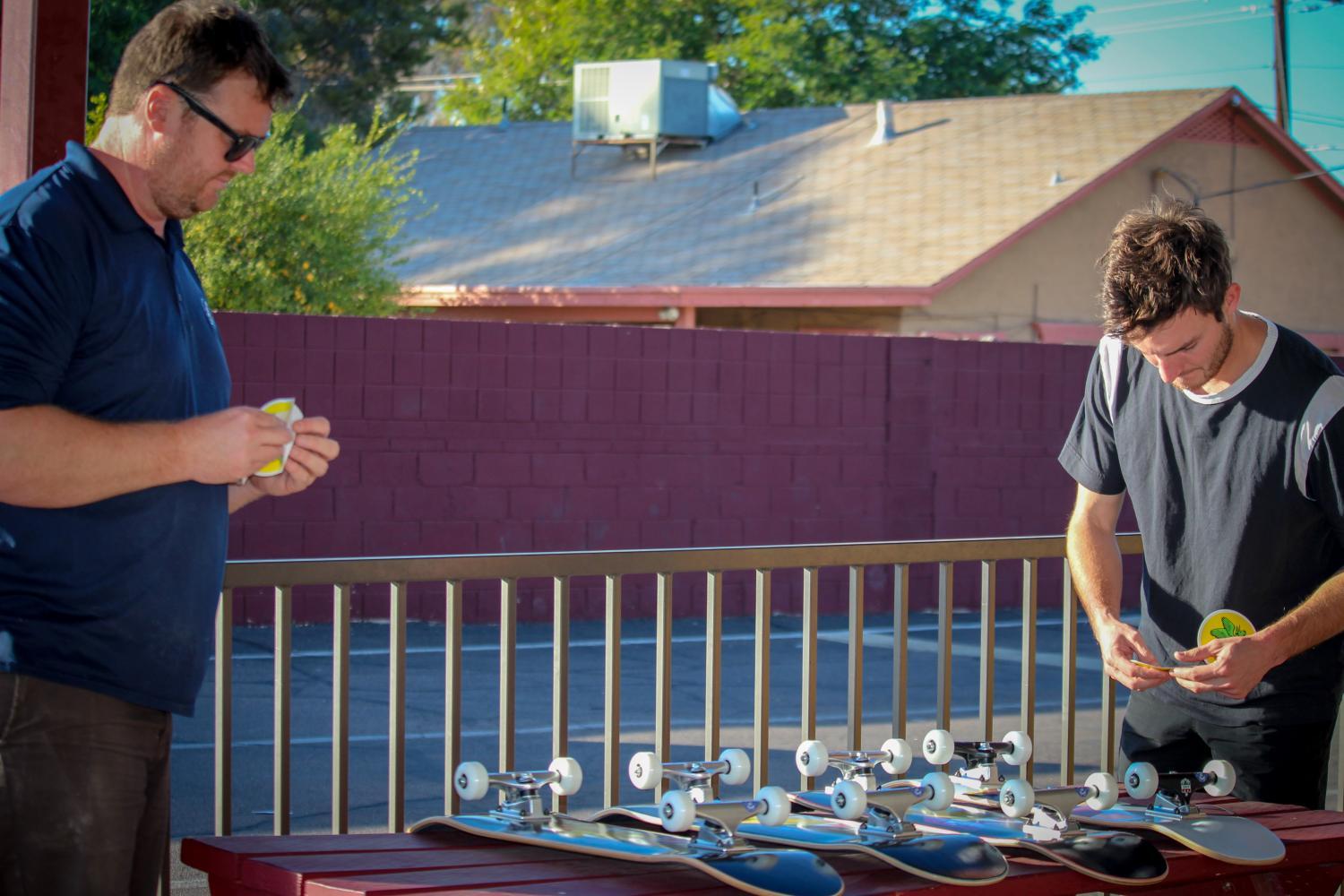 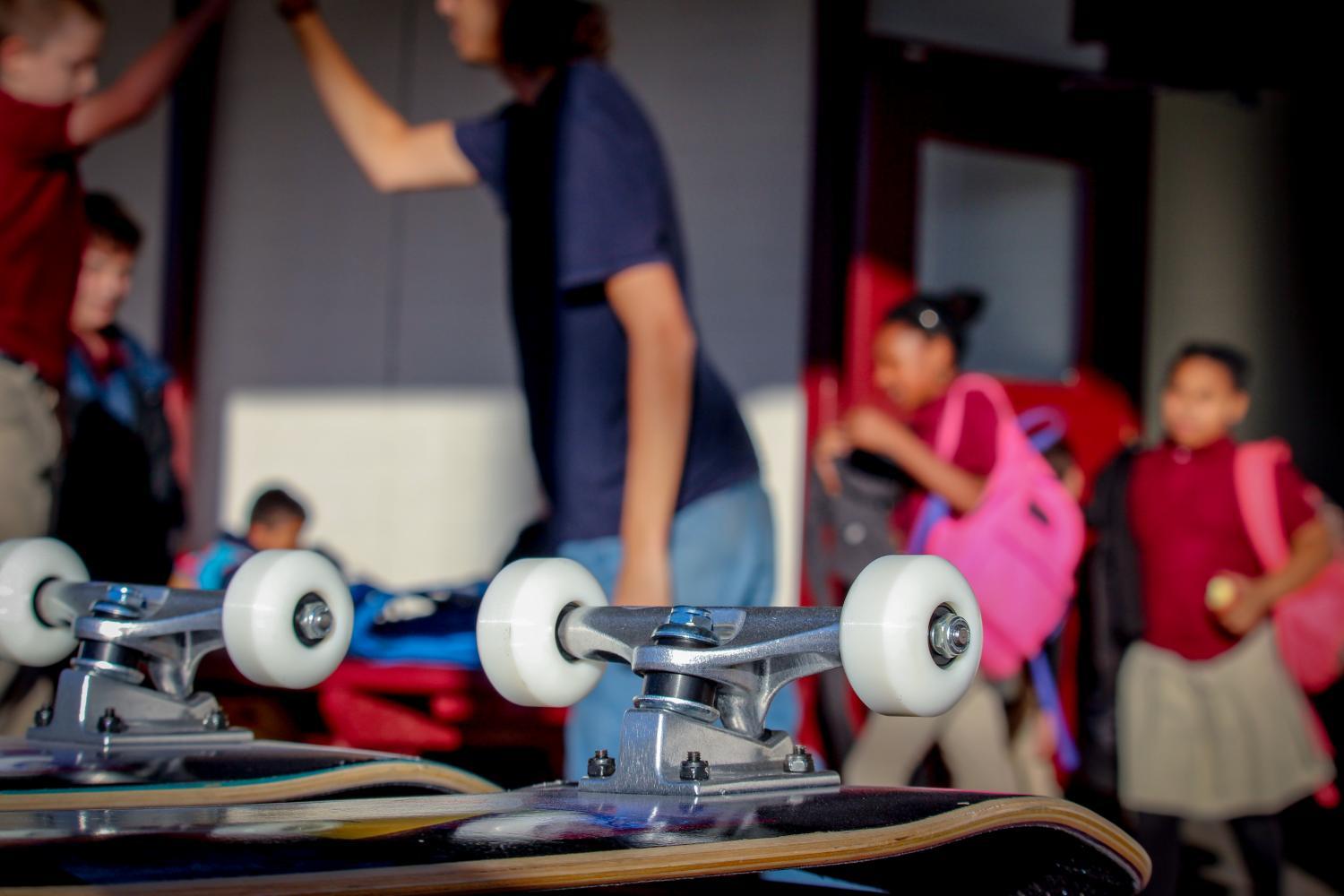 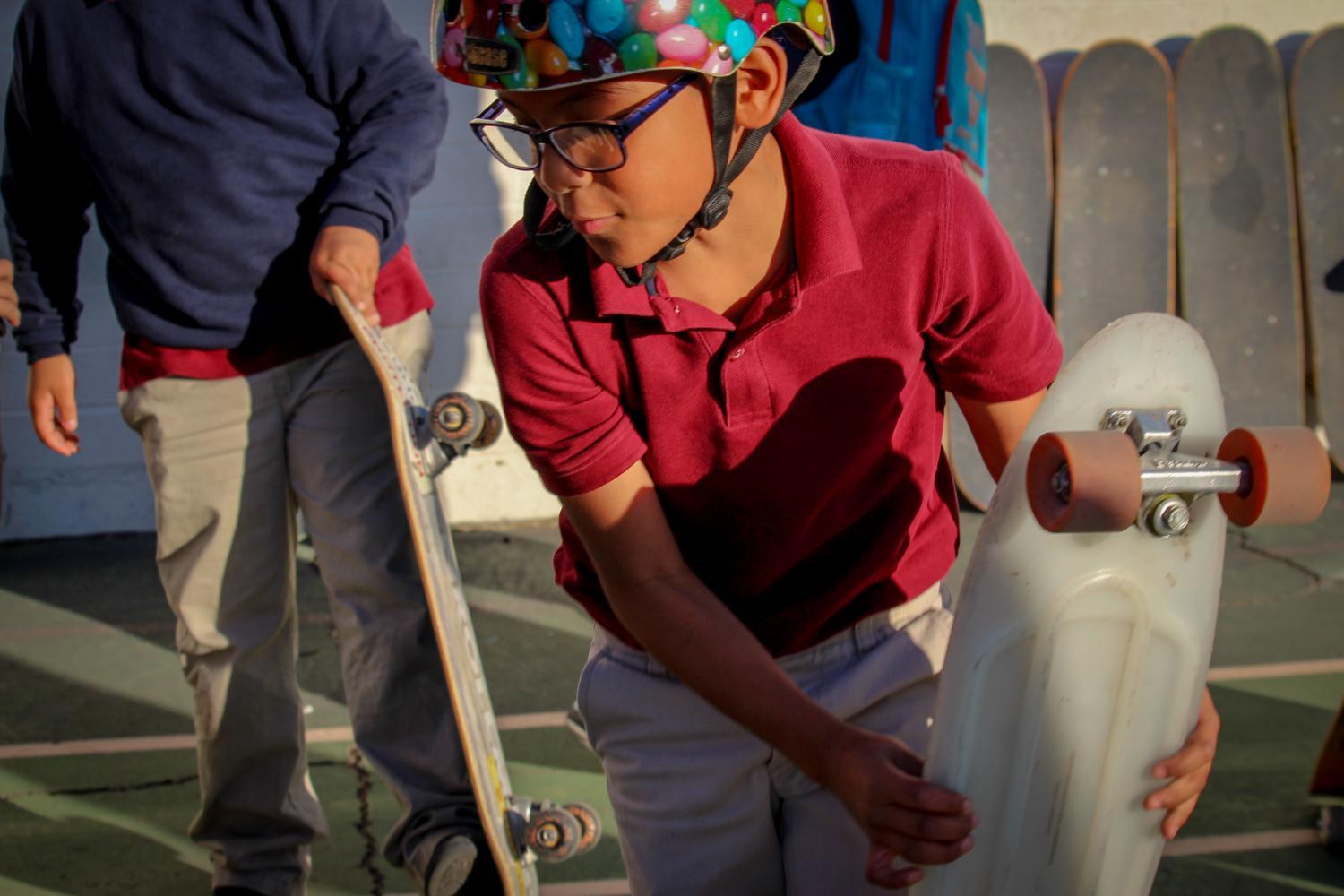 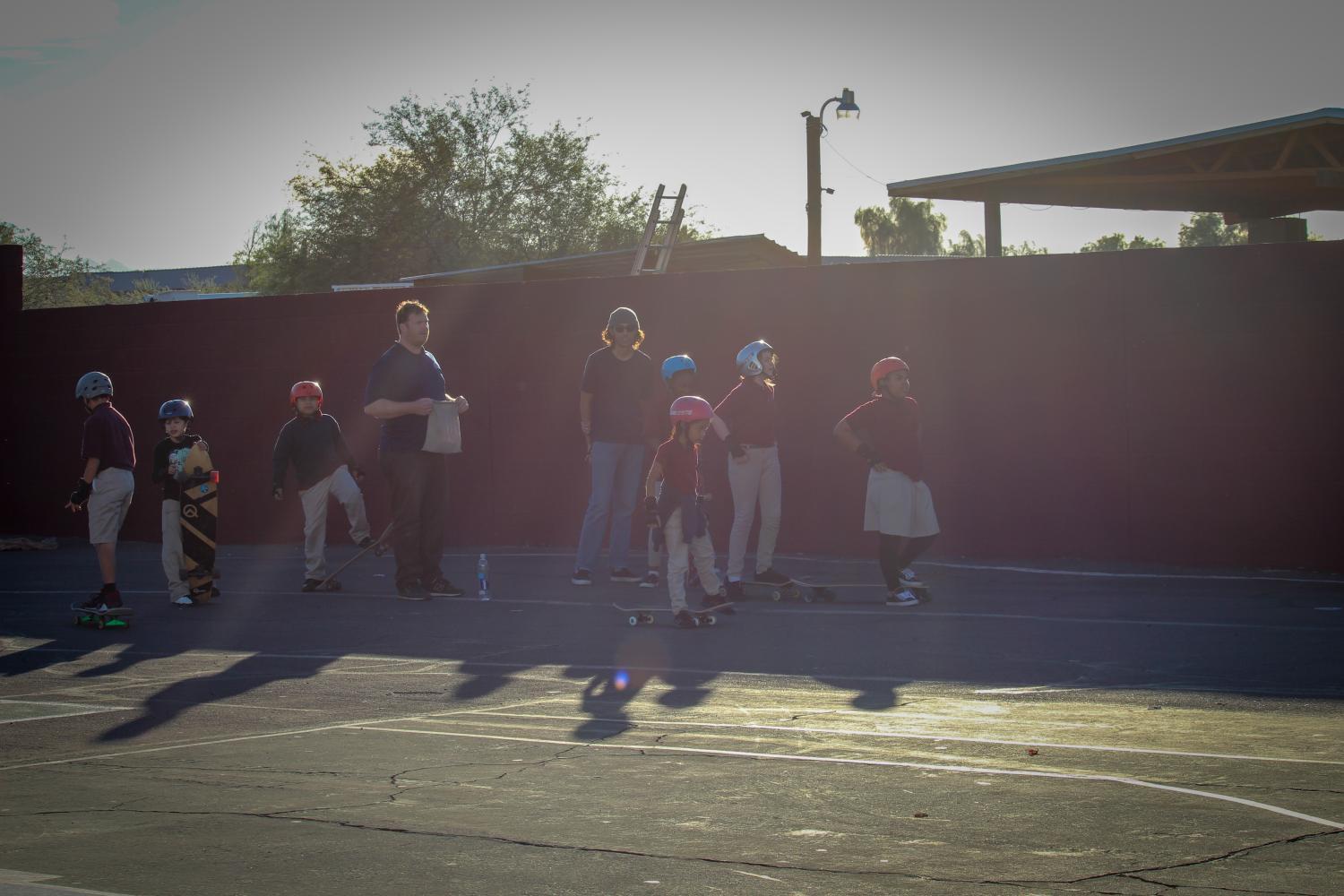 Claire Caulfield/KJZZ
Co-founder Tim Ward and volunteer Max Collay watch the students as the board, shouting out tips and doling out high-fives when students wait their turn or help a fallen skater off the ground. 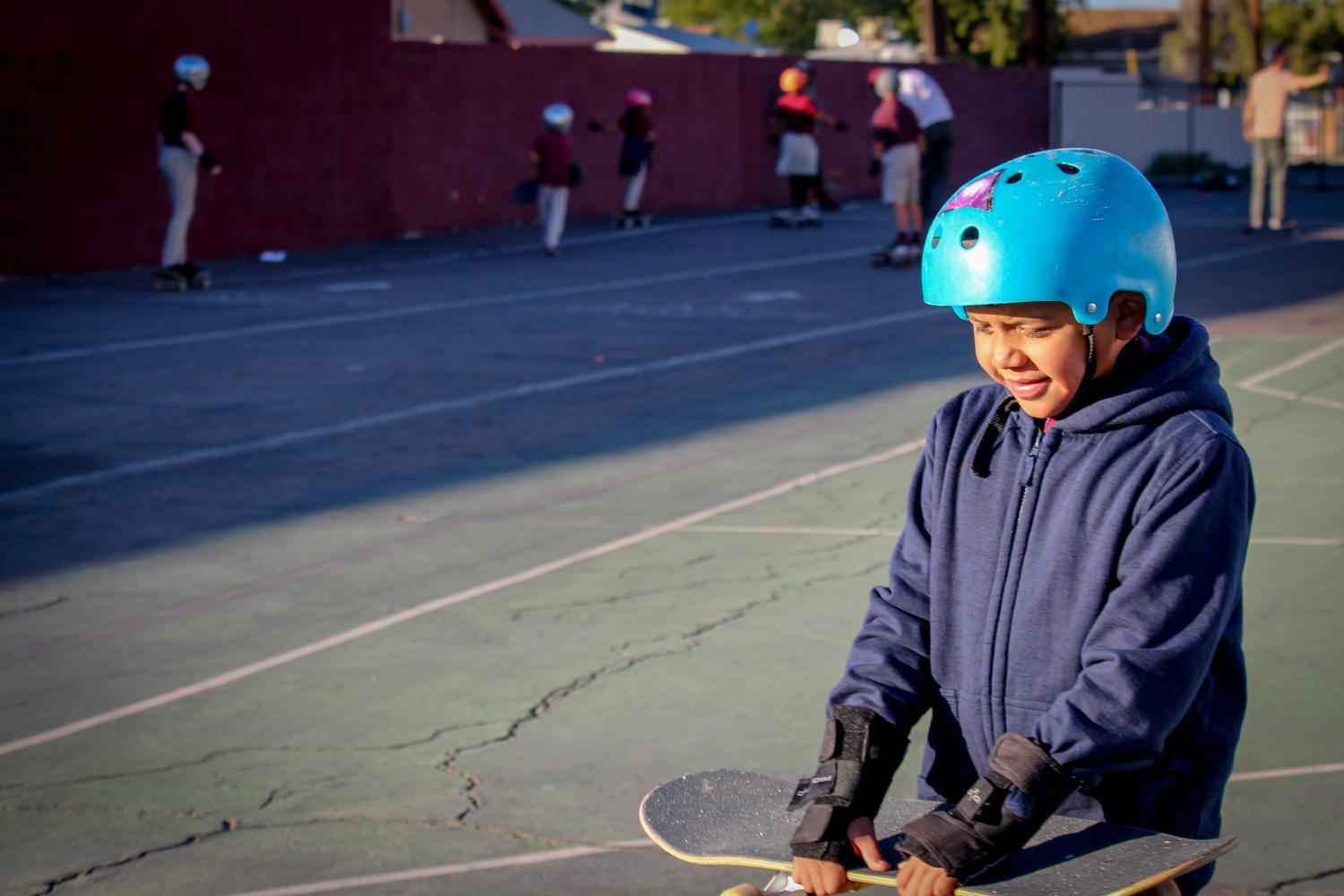 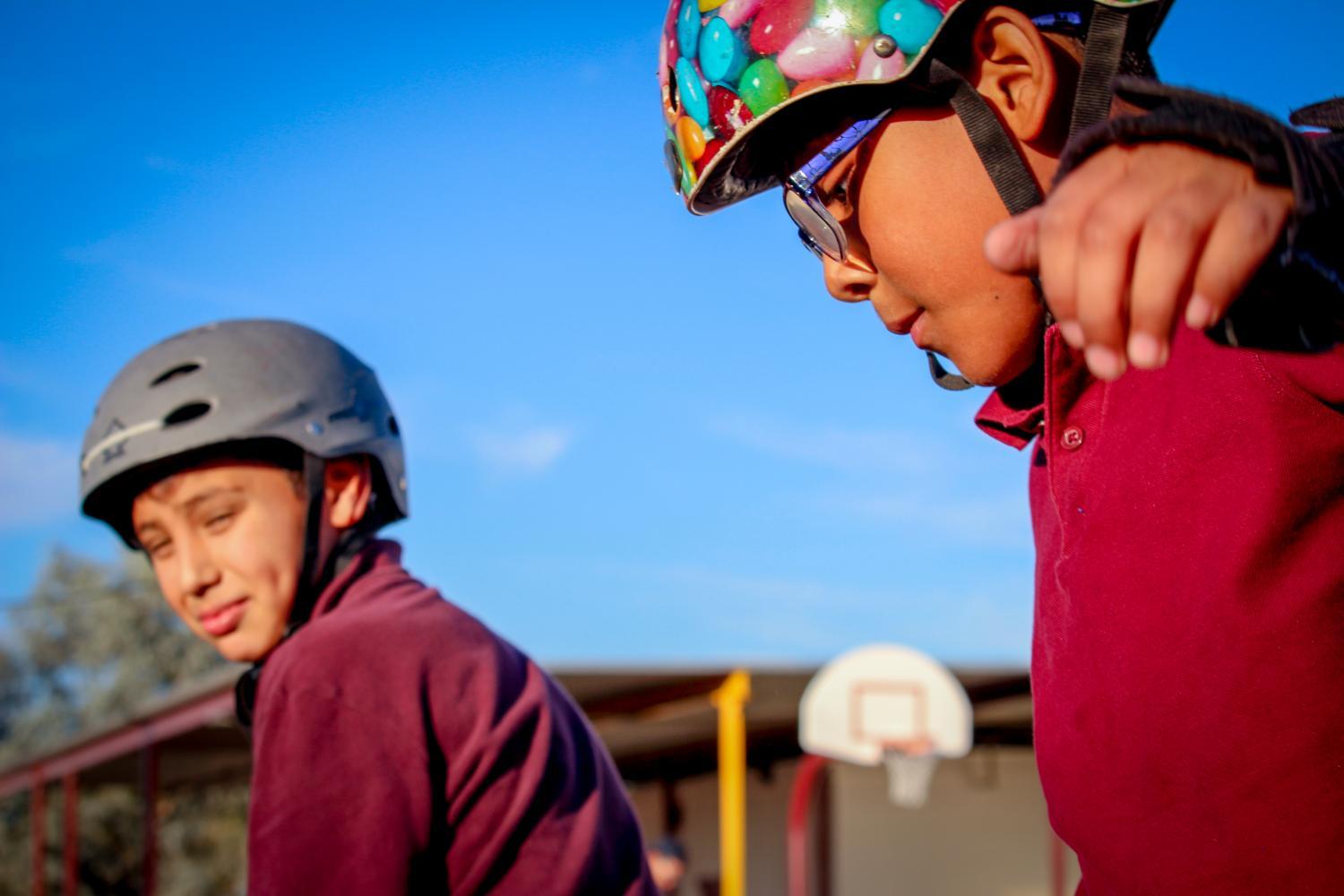 Claire Caulfield/KJZZ
After school programs have been linked to fewer absences and higher grades. 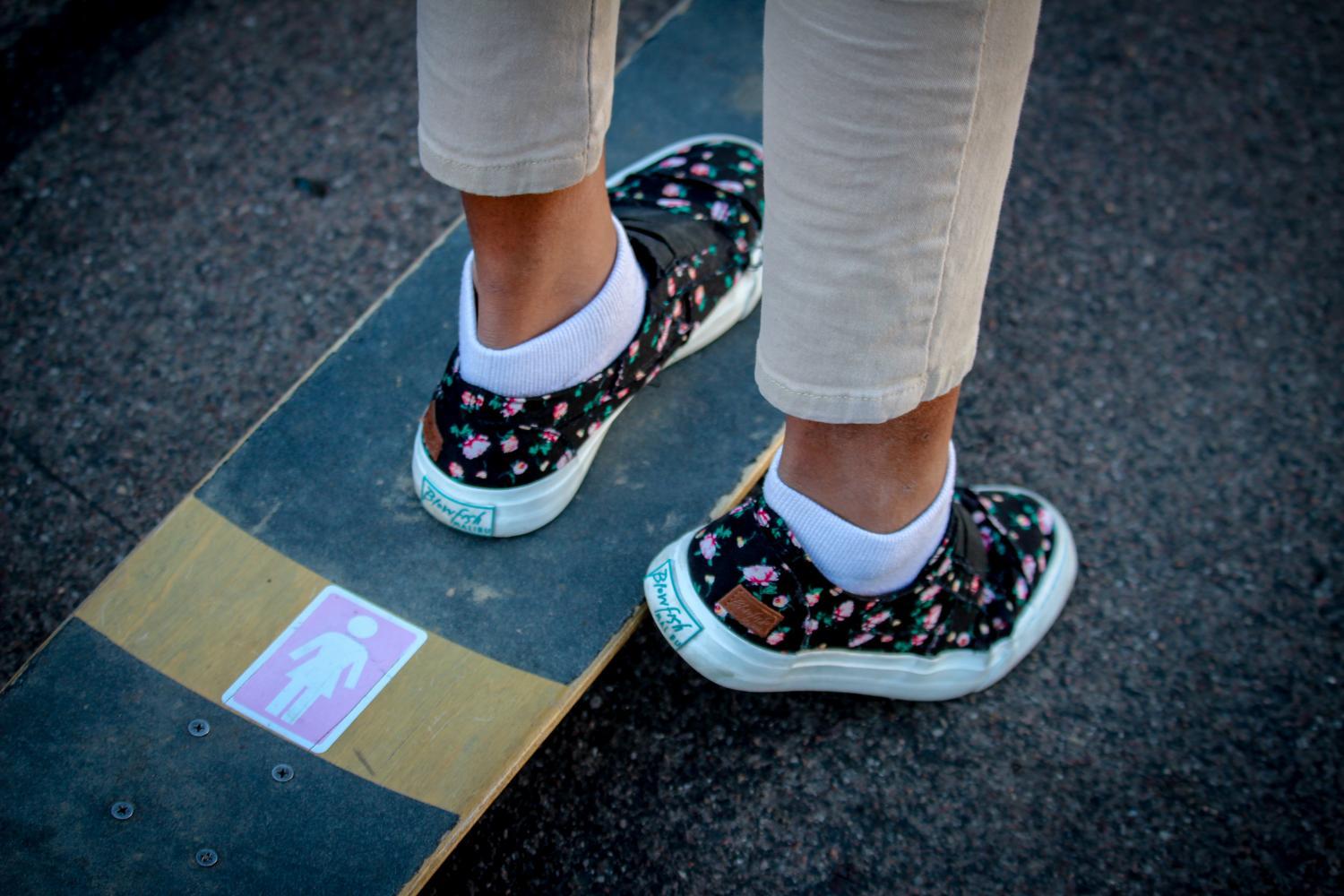 Claire Caulfield/KJZZ
While the stereotype of a skateboarder is a white teenage boy, efforts to include borders of color, younger, older and female boarders is bringing the activity to more people. 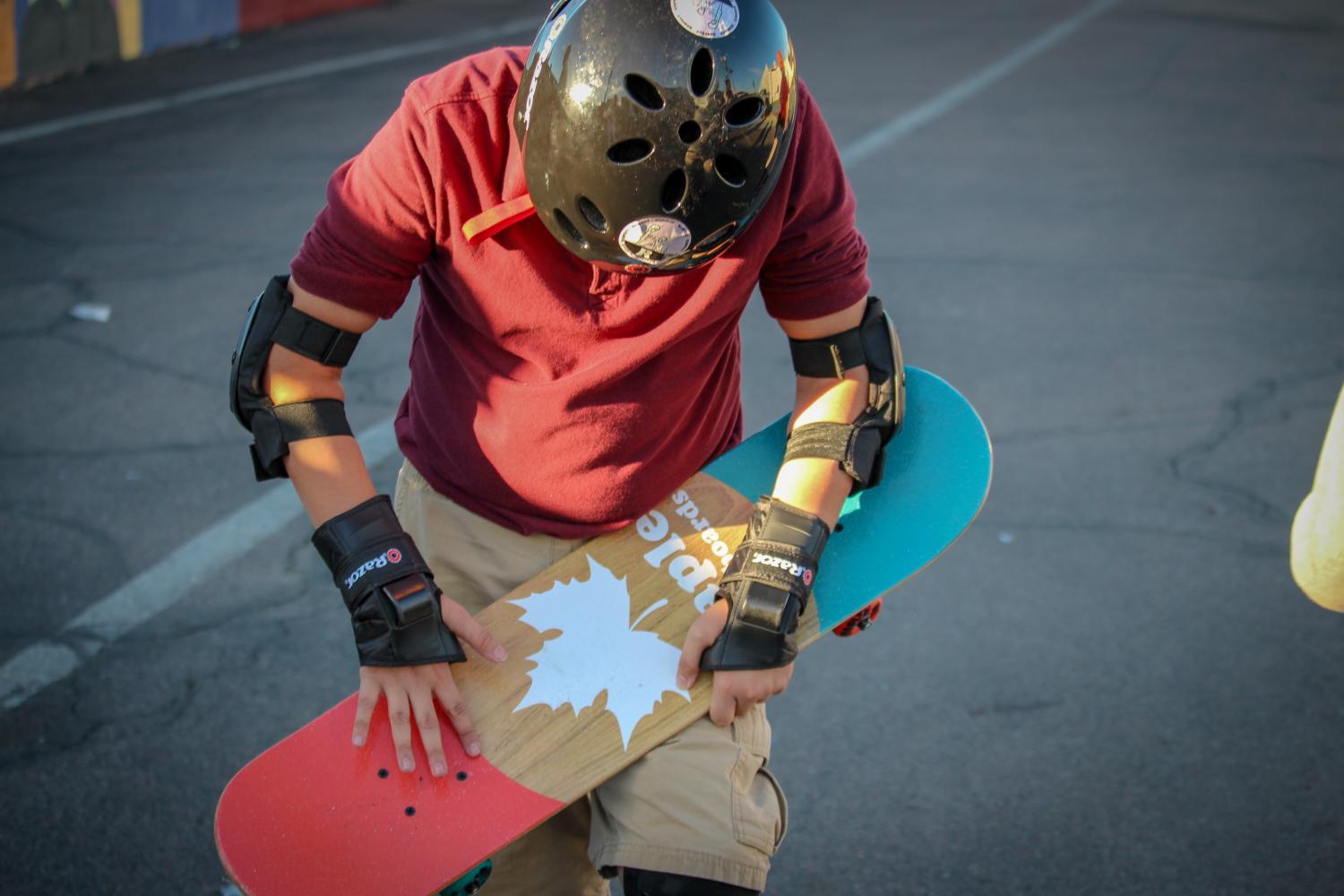 Claire Caulfield/KJZZ
Majority of the students have never used a skateboard before their first time at Skate After School, but now many own their own board and use it for transportation and fun.
Education