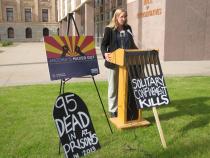 A faith-based human rights group has released a set of inmate testimonies on experiences in isolation. The American Friends Service Committee is urging the state to limit the use of isolation for all maximum security prisoners.

The release of the report was timed with the opening of the state’s new maximum security prison facility in Buckeye. AFSC insists additional maximum security cells are not necessary and the state should focus more on rehabilitation programs.

Alessandra Soler, the executive director of the ACLU of Arizona, agreed. She said these prisoners spend too much time in isolation.

"By policy, they’re supposed to be released for two hours a day but many times because of 'staffing' issues people will end up in their cells for 24 hours a day, without any access to any programmatic activities, without access to providers," she said.

For Soler, that much time spent alone should be considered solitary confinement, but some state officials disagree.

Doug Nick of the Arizona Department of Corrections said that definition is archaic.

"The state has single cells, of course," Nick said. "If you have a predatory inmate, a violent inmate, an inmate who is a threat to somebody else, clearly there’s a reason to have a single-cell environment for their safety, of the institution, and the safety of the other inmates."

The state will begin moving prisoners into the new Buckeye facility in the next few days.