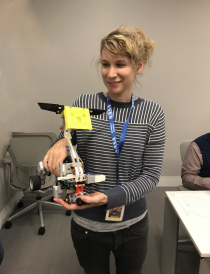 NASA’s successful Mars landing of its InSight probe on Monday represented a feat of engineering technology.

Mesa Community College students might have a hand in the designs of future Mars rovers.

Two MCC students, Anthony Burch and Jenna Connolly, were part of a team that placed first in a Mars rover prototype competition at the National Community College Aerospace Scholars project earlier in 2018.

Burch, who graduated this past May from MCC, said the contest provided a lot of real-world experience.

"It was actually like a whole company they wanted us to create and then present our Mars rover to them at the end," Burch said. "And, it was actually like we were selling it to NASA to be utilized on Mars to collect rocks and samples."

Burch 3D printed a part to give his team’s rover more stability and that effort was credited with helping to win the competition.