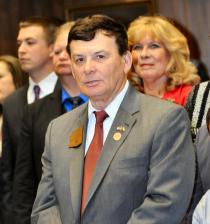 Republican State Rep. David Stringer drew fire for statements he recently made after a lecture by an Arizona State University political history professor.

In audio obtained by Phoenix New Times, Stringer can be heard telling students that African immigrants to the U.S. “don’t blend in.”

Arizona House of Representative Speaker-elect Rusty Bowers, himself a Republican, asked Stringer Friday to resign as chair of the Sentencing Recidivism Reform Committee and Stringer agreed to step down.

“Rep. Stringer’s comments are vile and won’t be tolerated,” said Speaker-elect Bowers. “His remarks don’t reflect the sentiments of the Arizona Legislature, the constituents we represent, and the policies we enact. Given the diversity of my own family, I take personal offense to these disgusting comments. I gave Rep. Stringer a critical assignment as chair of the Sentencing and Recidivism Reform Committee. These comments render him incapable of performing his duties as chair. I asked Rep. Stringer to resign as chair of the committee, and he has agreed to do so.”

Stringer made national news this summer when a viral video captured him saying, “There aren’t enough white kids to go around," referring to public schools in Arizona.