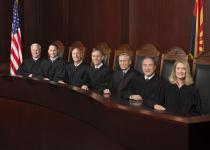 On the flip side of the extremely crowded ballot that Arizona voters considered in November was a long list of judges up for retention.

Two of them were Arizona Supreme Court Justices Clint Bolick and John Pelander.

And though there was a late push of opposition against them — primarily because of their votes to keep the Invest in Education measure off the ballot — both easily won retention.

But one change that will be happening on the court is a shift in chief justices, as Scott Bales will be succeeded by Robert Brutinel.

Robert J. McWhirter, attorney and constitutional scholar, joined The Show to talk about our high court and the state’s judicial system.