Russ Wiles: Malls Are Not Dead Yet Despite Surge In Online Shopping 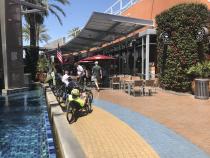 LAUREN GILGER: Black Friday sales were up again this year, and today on Cyber Monday holiday shopping sales could be up again, as well, showing us that online retail sales continue to climb. But brick-and-mortar stores — you know, those physical ones in malls that you can actually walk into — are not dead yet. Or at least that's what Arizona Republic reporter Russ Wiles says in a new piece for the paper, at least for malls that are doing the work needed to reinvent themselves. So just how hard has brick-and-mortar retail been hit in the last several years?

RUSS WILES: Well, it has been. There have been some bad, bad headlines we've seen recently for example Sears announcing bankruptcy. Massive store closures for Toys R Us, J.C. Penney, Macy's has been trimming back, 7000 stores apparently closed over the last year, of all sizes. And vacancies overall nationally in malls are up. But the headlines don't tell the whole story. Particularly since some of these headlines are coming from back east in the Midwest, where the economy isn't quite as good, population growth isn't as good. In Arizona, I think the picture has been pretty good, and actually, fairly good overall nationally, too, if you look beyond those headlines.

GILGER: Right. Right. So let's talk a little bit about that. So you're saying basically that shopping malls are not dead?

WILES: That's exactly what I'm saying. In fact some of the bigger malls out here — Scottsdale Fashion Square, Chandler, Biltmore. You know, they're running at 90-percent-plus and often even 95-percent-plus occupancy. So they're, they're doing OK.

GILGER: Yeah. And that's largely because they've been rethinking things, it sounds like.

WILES: Well old malls in bad locations are still struggling, but good malls where they're reinvesting. Quite frankly, I think are doing quite well. And in fact this holiday shopping season — November, December — they're expecting a $1 trillion dollars in sales, which would be a record.

GILGER:  What are some of the things that malls are doing particularly these ones who are reinventing themselves, what’s working?

WILES: What's working is adding a lot of restaurants that are cutting edge, not just chains. You don't you don't go to Desert Ridge necessarily, to eat at a McDonald's but you might eat at a Barrio Queen, which I believe they have there. They also have a lot of mixed use. There's going to be a hotel going up at Scottsdale Fashion Center. You can take a yoga class at Biltmore. You can work at Scottsdale Fashion Center. They have a new place coming in called Industrious, where companies can rent out cubicles, and you're working at a mall. You go outside and you buy whatever you want for lunch — you might gain 20 pounds, but you might be happy.

GILGER: So it's becoming much more mixed use and this is changing who they attract and who is shopping there, right?

WILES: Yeah, I mean the demographic, is always, that they're really going for is younger females — 28 to 45 — is like their prime. But malls are becoming, or at least the good ones, are coming up with places more to hang out. And I know that we've heard that in the past. But I think it's a broader mix and people going there for much more than just restaurants or a movie, they're going there to maybe exercise. There’s a Lifetime Fitness is going in at Biltmore, next year I believe, or they're taking classes, cooking classes, whatever. These are destinations to spend time at.

GILGER: Yeah. And let's talk about that a little bit more on the local level. So, you report that this company Mesa Rich which owns and operates malls like Scottsdale Fashion Square, Biltmore Fashion Park, etc. They've launched a new way for online stores to get their products into malls, as well. So they're blurring those lines. What's "brand box" tell us about that?

WILES: That's a new concept that they started in one of their malls in the Washington D.C. area just in the last couple of months. It's coming to Scottsdale Fashion Square early next year. What it is, is basically a big space cut up into four or five six smaller stores run by companies which up till now have only been online. So they're going to, these little online-only websites, are going to be able to test their products in a physical bricks-and-mortar setting. And there are some reasons why you would want to do that.

GILGER: What are they?

WILES: Well, there have been some studies that indicate that bricks-and-mortar and online retailing are fairly complimentary. For example, if you buy something online you could take it back to the store, very easily, probably more easily than shipping it back. You could also, before you buy something online you can go in, check the size, check the fabric. So both before you buy and after you buy, there are reasons why you might want to go in and go to a physical location even if you wind up buying online.

GILGER: So what does all of this mean then for holiday sales? As we see Black Friday just happened and the numbers seem to be way up again. I mean are you seeing not only online retail but also brick and mortar retail are those numbers projected to be higher than before?

WILES: Yeah, a key projection I saw was that you know we're going to hit $1 trillion dollars in holiday sales. Online is still growing faster, it's growing, you know, mid-digit, mid-double digit rates, you know, 15 percent, whatever. This was the projection. But they also felt that bricks-and-mortar stores would gain a pretty solid 4.4 percent which is faster than economy is growing. And the latest number I saw, just coming in today, was that Black Friday sales were up 24 percent. I mean bricks-and-mortars are still capturing almost 90 percent of all holiday sales so they're not, they're not obsolete and they're not irrelevant. The faster growth is online but bricks-and-mortar are still doing okay.

GILGER: All right. Not dead yet. All right. That's Russ Wiles with the Arizona Republic. Thanks so much for coming in Russ.