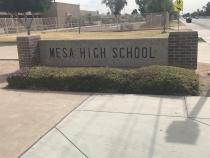 In an unusual event, residents in the Mesa Unified School District decided to pass a bond but rejected a budget override.

Mesa Assistant Superintendent Scott Thompson said while the bond will be a huge help with capital needs, the budget will need adjusting to keep wages competitive.

“We’re kind of having to rethink our entire budgeting process at this point and where we’re at and how we’re going to move forward,” Thompson said.

Thompson said the 10 percent override passed several years ago, but the 15 percent measure on the ballot this year would have gone straight to classified staff.

"We're trying to be competitive and we're looking at the surrounding districts and that additional 15 percent is making a difference for them," Thompson said. "We need that additional amount to compete as well."

There are more than 80 schools within the Mesa District.

Thompson said there will be an immediate hiring freeze on non-teacher positions, except bus drivers. He said the district is in critical need of bus drivers.
Education