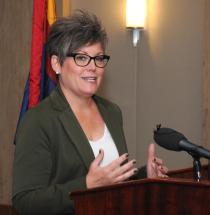 Incoming Secretary of State Katie Hobbs said Monday she believes political parties should be required to report when they spend money to elect specific candidates even as she defended the failure of the Arizona Democratic Party to disclose what it spent to get her elected.

But those laws, which generally require individuals and groups to detail how they are spending their cash, have a major loophole: Political parties need list only that they spent their money, with no specifics on which candidates are being helped.

In fact, the only way to determine how much a political party is spending is to go through the detailed reports that each television station files with the Federal Communications Commission each time a party buys air time. And that only covers TV and radio time, not newspaper ads or mailers.

As it turns out, the Arizona Democratic Party has since admitted spending $3.3 million to get Hobbs elected. That outstrips the more than $2.3 million Gaynor put of his own cash into the race, spending he was required to disclose in regular reports filed with the Secretary of State's Office.

But the only reports filed by Hobbs and supporters with that office — and the only ones legally required now — show $818,824 in expenses by her campaign plus another $170,000 spent on her behalf by other groups.

Hobbs denied there was anything wrong in requiring people to search out FCC records to find out the true extent of the money spent to get her elected.

"We followed the law and played the game by the rules that are in place,'' she said.

Aside from supporting greater disclosure of spending by political parties, Hobbs detailed a few other ideas she has once she takes office — assuming the Republican-controlled Legislature and Gov. Doug Ducey, also a Republican, go along.

One has to do with the idea of "emergency voting centers'' set up on the weekend before Election Day. Arizona law has allowed these for years. And many counties have used them.

But that did not stop Jonathan Lines, chairman of the Arizona Republican Party, from blasting Maricopa County Recorder Adrian Fontes for establishing five of these to be open on Saturday and Monday before Election Day.

Part of the issue was Lines' contention that the voting centers were in largely Democratic areas.

But Lines claimed that Arizona law requires all in-person voting to be done no later than the Friday before the election. And he also complained that there was no actual "emergency'' that required the voting centers.

Hobbs, however, said she's a fan of such voting centers, saying she favors "any policy that's going to increase voter participation, which is really what these emergency voting centers are about. She acknowledged, though there may need to be legislation to ensure that all counties operate on the same rules.

But Hobbs was unwilling to say there should be a tighter definition of what constitutes an "emergency.''

"Who gets to decide what's an emergency?'' she asked. The simplest thing, said Hobbs, is to allow people to vote in person for the entire weekend before the election — emergency or not. "There's really no reason we can't do that,'' she said.

Hobbs also took issue with a legal bid by the GOP to block Pima and Maricopa counties from verifying the signatures on early ballot envelopes after the polls closed at 7 p.m. on Tuesday. The lawsuit was settled, not by stopping such those two counties from matching up signatures on envelopes with those on file but by ensuring there was a similar process at work in all 15 counties.

The issue is crucial because early ballots received by mail or turned in at polling places can be counted only if signatures match. Hobbs said trying to stop the process at 7 p.m. on Tuesday makes no sense.

"If we're going to allow ballots to be turned in on Election Day we can't stop matching signatures just because there's that deadline,'' she said. "I mean, we have to make sure that those votes count.''