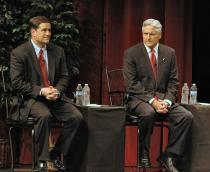 Gov. Doug Ducey has appointed a former political rival — Fred DuVal — to fill a vacancy on the Arizona Board of Regents.

DuVal was the Democratic nominee for governor in 2014 against then-Treasurer Ducey. DuVal plans on collaborating with Ducey to expand the Arizona Teachers Academy.

Duval, a former chairman of the Board of Regents, said he plans on working across party lines.

“I really appreciate his making this appointment as a gesture to say, ‘Look, there are times for campaigns, but there are times to get stuff done and put campaigns aside.’ And this is a time for us to get to work and really do everything we can to make sure our education system is working for every Arizonan," he said.

DuVal said Ducey’s decision was unexpected and he sees the appointment as a statement of bipartisanship.