Q&AZ: How Did The Valley Of The Sun Form? Digging Into Phoenix's Geological Origins

Download mp3 (6.39 MB)
Nadine Arroyo Rodriguez/KJZZ
A view from the Hole in the Rock at Papago Park in Phoenix.

Phoenix is known for its scenic mountains and unusual weather. Listener Dominick Nigro asked us about these features and how they relate to one another via Q&AZ, KJZZ's reporting project.

Phoenix has two rainy seasons: summer monsoon storms from the south and winter storms from the Pacific. But as Arizona State University meteorologist Randy Cerveny explained, where in Phoenix that rain falls depends partly on the mountains that ring the Valley.

"In order to get clouds and precipitation we have to uplift the air, we have to move it up. Now, in the flat deserts, this heat of the land surface itself can do that, but it can be accented and improved upon by having wind flow that takes it up a mountain," he said.

Rising air cools, aiding condensation and rain. So Cave Creek, at 2,000-plus feet, gets more rain than Sky Harbor, 1,000 feet below.

But where did these mountains come from?

"When you think about this flat valley, I think you have to kind of start over with what it wasn't, right before it started to become what it would be," said Brian Gootee of the Arizona Geological Survey.

National Park Service
The Southern Basin and Range consists of the Sonoran Desert, Salton Trough, Mexican Highland and the Sacramento sections. This portion of the province mountains have a slightly lower elevation than those found in the northern part of the province.

That might sound like a Zen koan or riddle, but Gootee simply means that, in the days of the dinosaurs, the Valley was a mountain range, built by the same kinds of tectonic forces currently uplifting the South American Andes.

Then the tectonic plate motions changed, and the Southwest stretched to two to three times its former size. Like a caramel-filled chocolate bar, its surface cracked and fractured, while its "gooier" lower layers stretched and deformed.

"South Mountain, the Estrellas, maybe, San Tans, White Tanks, Sacaton Mountains — all of these mountains, like in the McDowell Mountains as well — those start to form as nascent mountains around 25-20 million years ago," said Gootee.

Around these fractures, some blocks rose to become mountains while others dropped down to form valleys. This was the birth of the undulating Basin and Range system that today wraps around the Colorado Plateau.

The extreme topography created by these faults and blocks has since been hidden beneath millions of years of sediments and eroded gravels.

"If we were out at Luke Air Force Base, and you suddenly took away all that sediment, you'd fall a long ways. You'd fall a mile and a half," said independent researcher Steve Skotnicki, who uses drill cuttings from water wells across the Valley to map the area's geological and hydrological prehistory.

MORE: See a Geologic Timeline Of The Phoenix Area

In fact, many of our mountains and buttes are actually the tips of great miles-deep blocks, poking up like the corners of books tilting on a shelf.

Some comprise truly ancient rocks. The Phoenix Mountains — North Mountain down though just south of Piestewa Peak — are built of 1.7-billion-year-old rocks that have endured ages of punishment.

Rocks in the western area of South Mountain and in the White Tank Mountains are of similar vintage.

Gootee explained that rocks that lead such long and interesting lives can pose particular problems for scientists trying to unravel their history.

"It's like going into a car-crushing factory that's been around for a hundred years, and you're asked to go in there and reconstruct all of those vehicles and the makes and the models and put them back together and tell us a story about the evolution of cars."

Across the Valley, South Mountain arose from the hotter "caramel" layer 6 miles beneath the surface.

"Twenty-five [to] 15 million years ago, the continental crust was stretched, and the rocks in the South Mountains were pulled out from underneath that area to the northeast, underneath Fountain Hills, and brought up to the surface," said ASU geologist Steve Reynolds, an expert on the Valley's bedrock features.

As it domed upward, South Mountain sent other fault blocks sliding down into the Valley. Today, we know them as Camelback Mountain and the Tempe Buttes.

"The tilting of those blocks is what accounts for the tilted layers in Papago Park and the volcanic rocks around the ASU campus," said Reynolds.

Reynolds explained that the rocks at Papago Park, including Hole in the Rock, were likely deposited by landslide along a steep mountain front that has since eroded away. 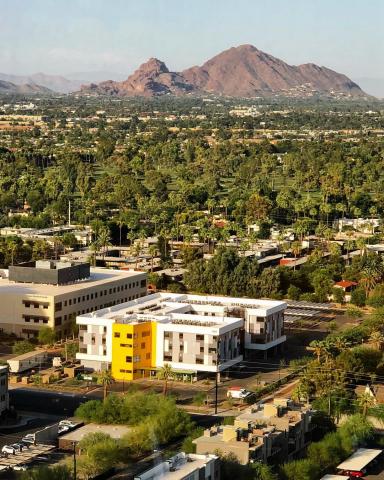 Camelback Mountain is made mainly of granite, which forms via volcanic activity underground. But its head — known, appropriately enough, as the Camel's Head Formation — is composed of sedimentary rock, which forms from particles deposited on the floor of a body of water.

In between the formation of the former and the latter lies a vast gap in geologic time even greater than Great Unconformity visible at the Grand Canyon.

The Superstitions immortalize the remains of an ancient supervolcano not unlike the one slumbering beneath Yellowstone National Park. Such volcanoes blast material skyward with hundreds or thousands of times the power of the 1980 Mount St. Helens eruption.

"If you go down to the San Tan Mountains, you can still see several hundred feet thick of those deposits, 40 miles from the Superstitions," said Skotnicki.

Eventually, the ash and basalt that solidified inside the collapsed caldera uplifted and eroded.

"That is the face of a cork that popped up after the caldera had filled up. So you're looking basically at the internal anatomy of the caldera," said Gootee.

The natural world is always in motion, even when we can't perceive it. Prior to our eyeblink of occupation, the Valley of the Sun sheltered beneath shallow seas, built up multiple mountain ranges and fluctuated between wet, cool ice ages — and, of course, "a dry heat."

U.S. Geological Survey
The Basin and Range province.
Nadine Arroyo Rodriguez/KJZZ
This is a view of Piestewa Peak and the surrounding communities from the Echo Canyon Trail. 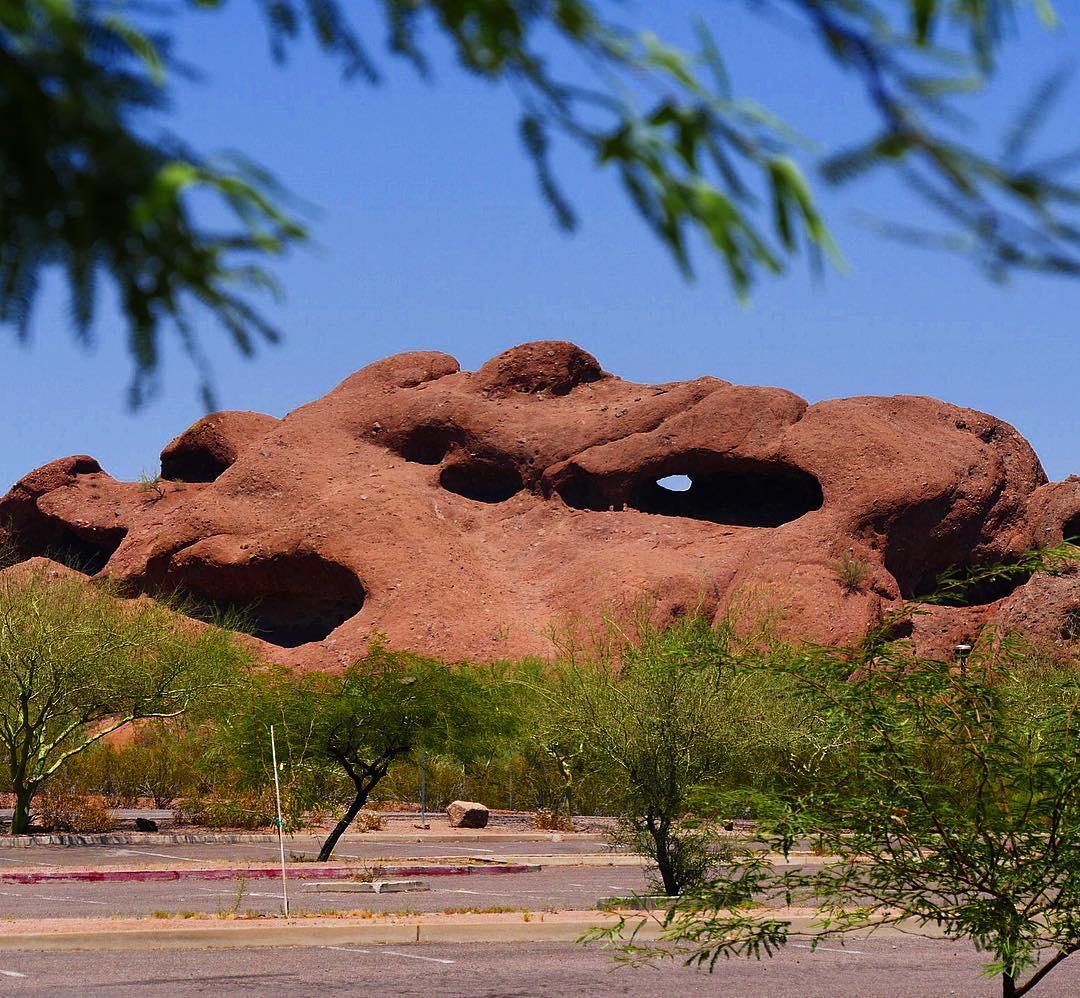 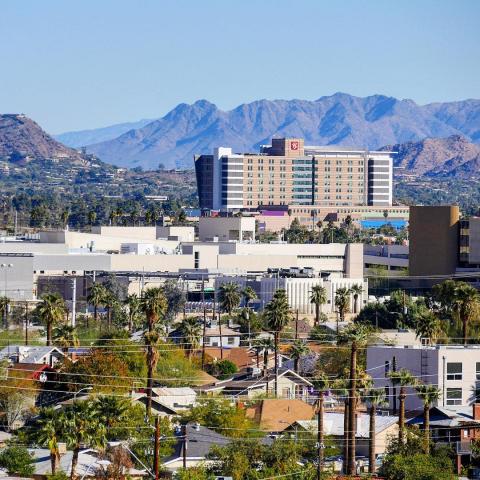 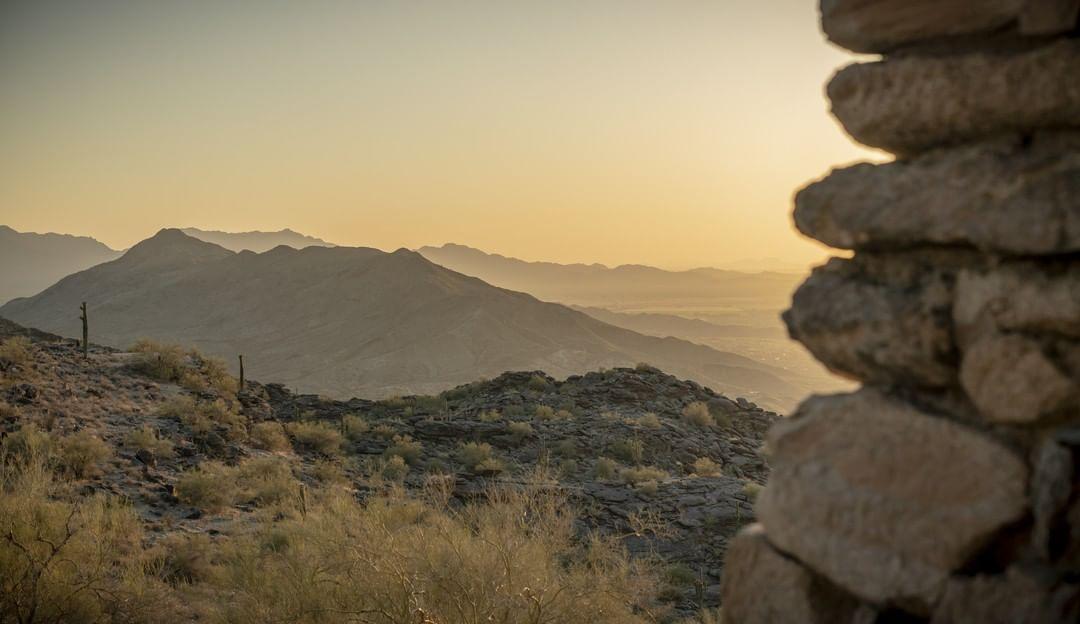