Are Dockless Scooters Destroying Cities Or Saving Them? 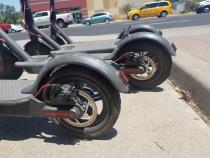 Sky Schaudt/KJZZ
Scooters parked at a bus stop in Tempe in June 2018.

Electric scooters have been popping up across the Valley while cities are still trying to figure out how to regulate dockless bikes.

The University of Arizona has banned the scooters on its campus and ASU has the same prohibition in place in Tempe. Scottsdale and the City of Tempe, meanwhile, are allowing them, with some conditions.

Cycling writer Eben Weiss wanted to see how these scooters work for himself, so he headed to Portland, Oregon to check them out. Weiss has a column for Outside Magazine and wrote about his experience in the magazine. For reference, his blog is called Bike Snob NYC, so you get a sense of his first transportation love.

Weiss spoke with The Show about this other two-wheeled vehicle, and started the conversation by talking about his initial impressions of scooters and scooter culture before he headed out west.