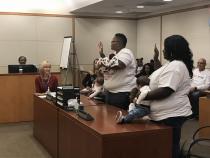 Bridget Dowd/KJZZ
Tanasha Robertson (left) and her wife Leauna Jones are sworn in to finalize their adoption of eight-month-old Jeremiah.

National Adoption Day is observed every year on the Saturday before Thanksgiving. In celebration, courts and communities across the country come together to finalize thousands of adoptions of children in foster care.

More than 130 adoptions were finalized at an event in Phoenix on Saturday at the Durango Juvenile Court Center. Families were each given a time to enter their assigned courtrooms and be sworn in to finish the process.

Leauna Jones and her wife Tanasha Robertson adopted eight-month-old Jeremiah. They’ve been taking care of him since he was three months old.

“It just feels like he belonged to us,” Jones said.  “We got him right before our wedding in March and he was able to go on several vacations with us. It’s like he’s a part of our family. We’ve been waiting for him to come to us.”

The couple brought along a large extended family wearing “Team Jeremiah” t-shirts. They have other children at home and this is the first time they’ve adopted.