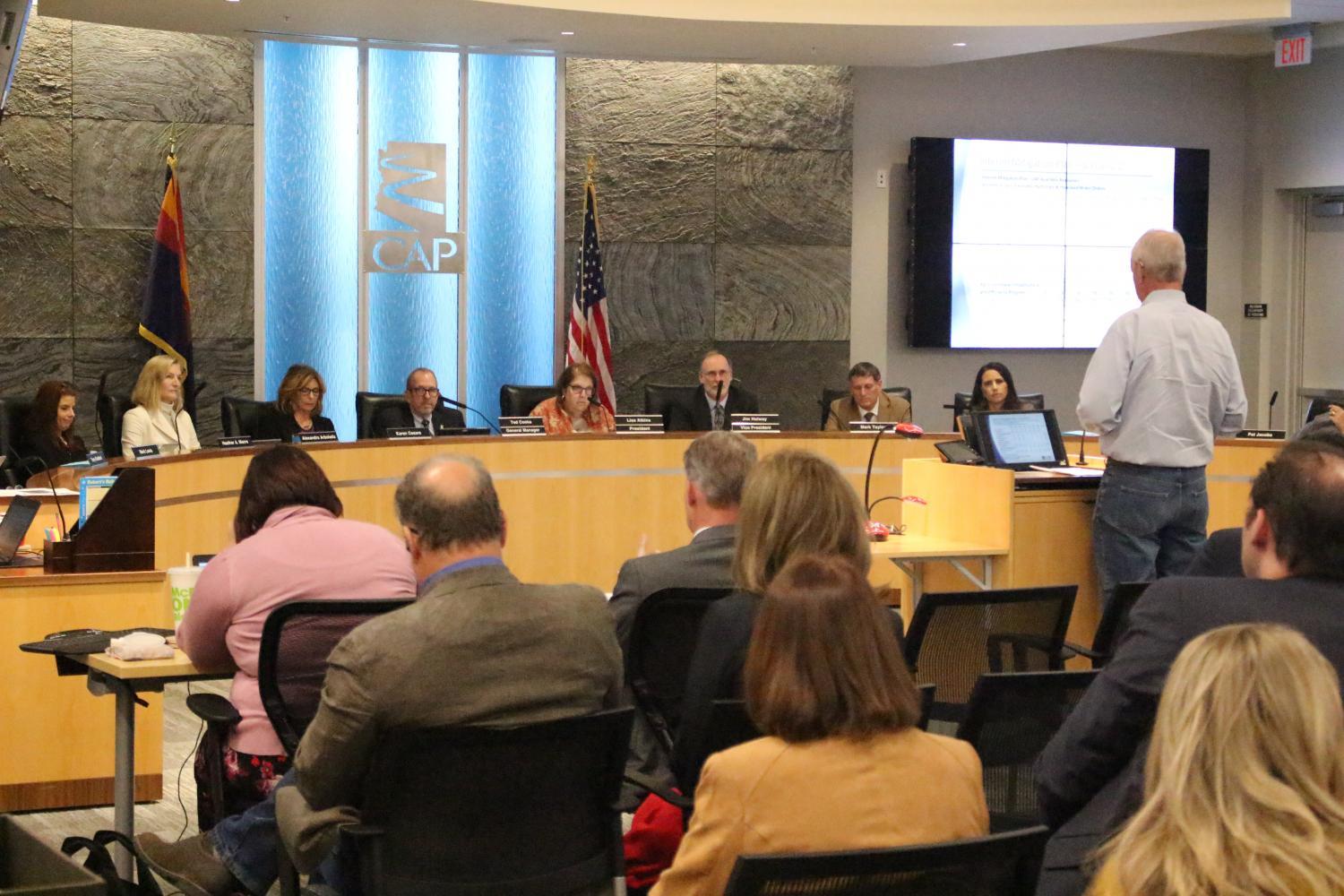 Bret Jaspers/KJZZ
Farmer Dan Thelander, a member of the board of the Maricopa-Stanfield Irrigation and Drainage District, speaks before the CAWCD board.

An old, divisive disagreement over legal autonomy threatened to rear its head again at a special meeting of the board of the agency that runs the Central Arizona Project.

It has also been one of the lead agencies negotiating a so-called Drought Contingency Plan, a deal on water cutbacks both inside Arizona and throughout the Colorado River basin. Broadly speaking, the Lower Basin’s portion of the DCP cuts water to Arizona, Nevada and California when Lake Mead enters certain levels of “shortage,” something declared by the federal government. Lake Mead is the Lower Basin’s reservoir for Colorado River water.

Now, CAWCD is considering whether to assert itself as a party that would sign the Lower Basin DCP in its own right, along with Arizona’s Department of Water Resources (ADWR) and agencies in California and Nevada.

At a special meeting on Thursday, CAWCD’s general counsel, Jay Johnson, said that the board needs to sign the DCP.

“No entity other than the CAWCD board may legally bind the district to take on the extensive obligations of DCP in water reductions and costs that will fall on its water users, ratepayers and taxpayers,” he said.

That interpretation of the CAWCD board’s authority is disputed by ADWR and water users located along the river.

Nicole Klobas, an ADWR attorney, described the legal relationship this way: when it comes to Colorado River water, the federal government contracts with ADWR, which in turn signs an agreement with CAWCD. ADWR would be the go-to agency if parties within Arizona think the DCP deal with the United States is not being properly carried out.

Tom Buschatzke, director of ADWR, called the legal relationship “fundamental to the state of Arizona.”

Representatives of water users in both Yuma and Mohave counties, on-river communities with high-priority water rights that do not contract with the CAWCD, opposed any move by the agency to sign the multi-state plan.

Lois Wakimoto, chairman of Mohave County Water Authority, reminded the board that it does not represent people outside of Maricopa, Pinal and Pima counties. “ADWR, on the other hand, represents the state of Arizona and all of the Colorado River users.”

A motion to authorize the CAWCD board president to sign the Lower Basin DCP on its own behalf was later withdrawn. Members decided to revisit the issue at their next meeting on Dec. 6 after exploring possible compromises with ADWR.

The federal Bureau of Reclamation does not take a position on the signature issue, said Leslie Meyers, Phoenix-area manager for the Bureau. She said they are willing to help the parties find a compromise.

"I think our folks think that there is a pathway forward to do that. With discussion," she said in an interview. "What we don’t want is for this to cause consternation and halt the rest of the discussions."

Last year and into 2018, conflict erupted over which agency has the power to declare when water is saved on Lake Mead for the health of the Colorado River system (an action known as forbearance), as well as over a CAWCD legal claim of sovereign immunity.

Since then, the heads of both agencies have presented a united front, working with water stakeholders both publicly and privately since the summer to develop an agreement on how Arizona would handle cuts under the drought plan.

Also at Thursday’s CAWCD meeting, board members approved a proposal to bring to the steering committee charged with finalizing a drought plan for Arizona. The proposal, in part, authorized CAWCD to acquire up to 250,000 acre-feet of conserved water at a cost of up to $60 million. If the proposal is accepted as-is by the steering committee, which is unlikely, it would provide a framework only through 2022.

Meyers would prefer to see something that charts all seven years of Arizona’s internal DCP, which is to last until 2026.

“It would be our preference to have a whole proposal on the table,” she said. “But really, Reclamation’s goal is for Arizona to feel comfortable [and] reach consensus.”

But the talks continue, and the CAWCD proposal is one of several ideas being discussed.

“We are close,” said Gov. Stephen Roe Lewis of the Gila River Indian Community. “We are very close, I believe, to a path forward for DCP that represents and that respects all of the big tent of stakeholders in Arizona.”