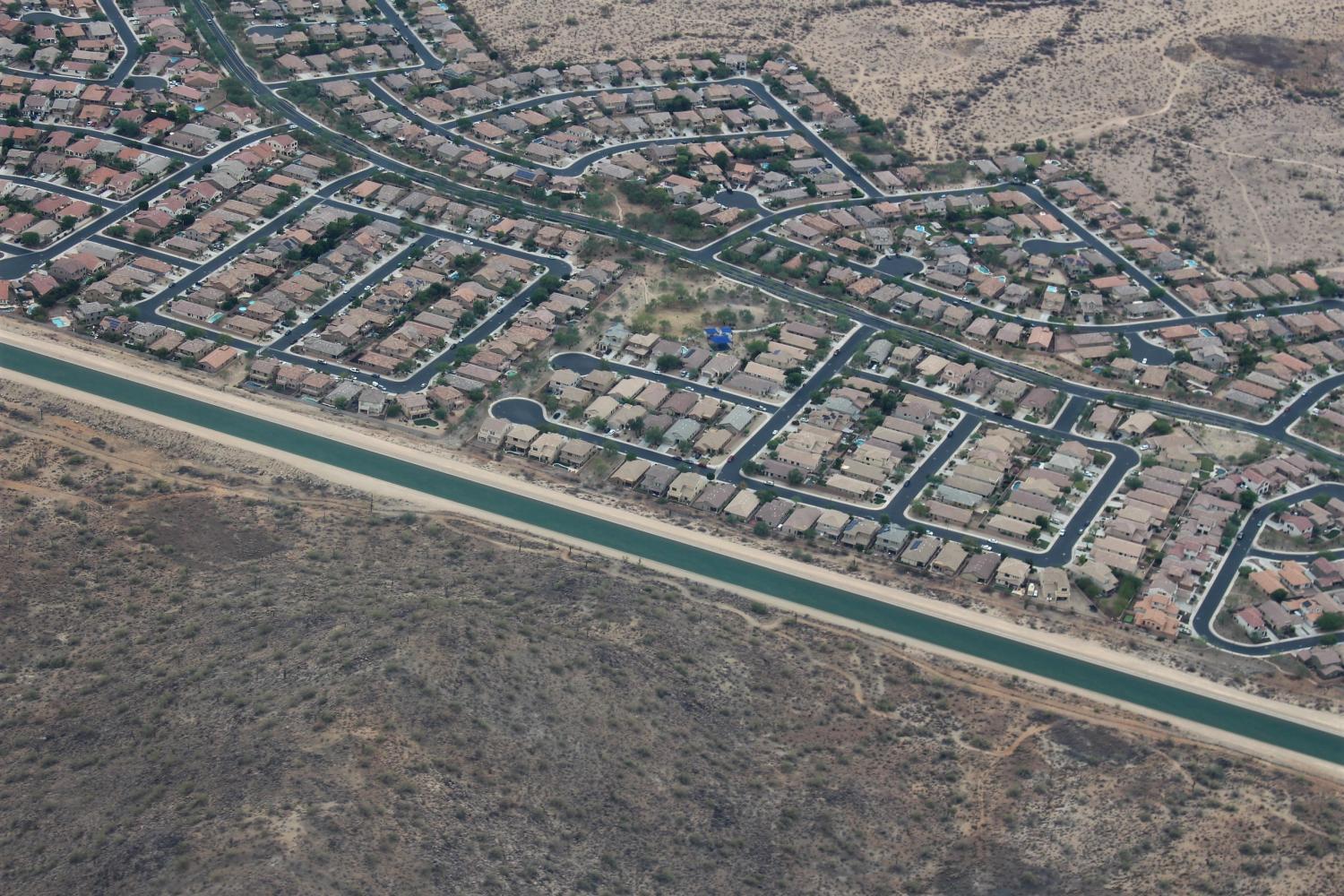 Luke Runyon/KUNC and LightHawk
The Central Arizona Project pulls water from the Colorado River to provide for the cities of Phoenix and Tucson.

Climate change is growing the gap between the river’s supply, and the demands in the communities that rely on it, including seven western U.S. states and Mexico. The federal government recently released proposals called Drought Contingency Plans designed to keep the Colorado River’s biggest reservoirs from falling to levels where water is unable to be sent through the dams that hold up Lakes Powell and Mead.

The river’s two basins are working on separate plans to manage the risks posed by dwindling water supplies. The Upper Basin — comprised of Colorado, Wyoming, Utah and New Mexico — is focused on protecting water levels within Lake Powell. The reservoir is 45 feet lower now than it was in October 2010. It’s projected to fall another 15 feet in the next year.

Powell acts as the Upper Basin’s savings account, and water managers in those states say the water it holds keeps them compliant with a 1922 agreement that divvied up the river’s water and promised a certain amount to downstream users. Violating that agreement could spark a decades-long legal battle among government agencies throughout the basin.

In the Lower Basin states of Arizona, California and Nevada, the problem is overuse. Essentially, more water exists on paper than in the river itself. That supply-demand gap is causing the country’s biggest reservoir, Lake Mead near Las Vegas, to drop too, increasing the likelihood of a federal water shortage declaration at the start of 2020.

Because they make fundamental changes to how the river is managed, the plans will require congressional approval before they go into effect. The plans are an attempt to patch problems that arose from a set of river management guidelines agreed to in 2007.

Here are the top three things to keep an eye on as water managers attempt to get the plans finished:

Will Upper Basin Create A Protected Pool In Lake Powell? 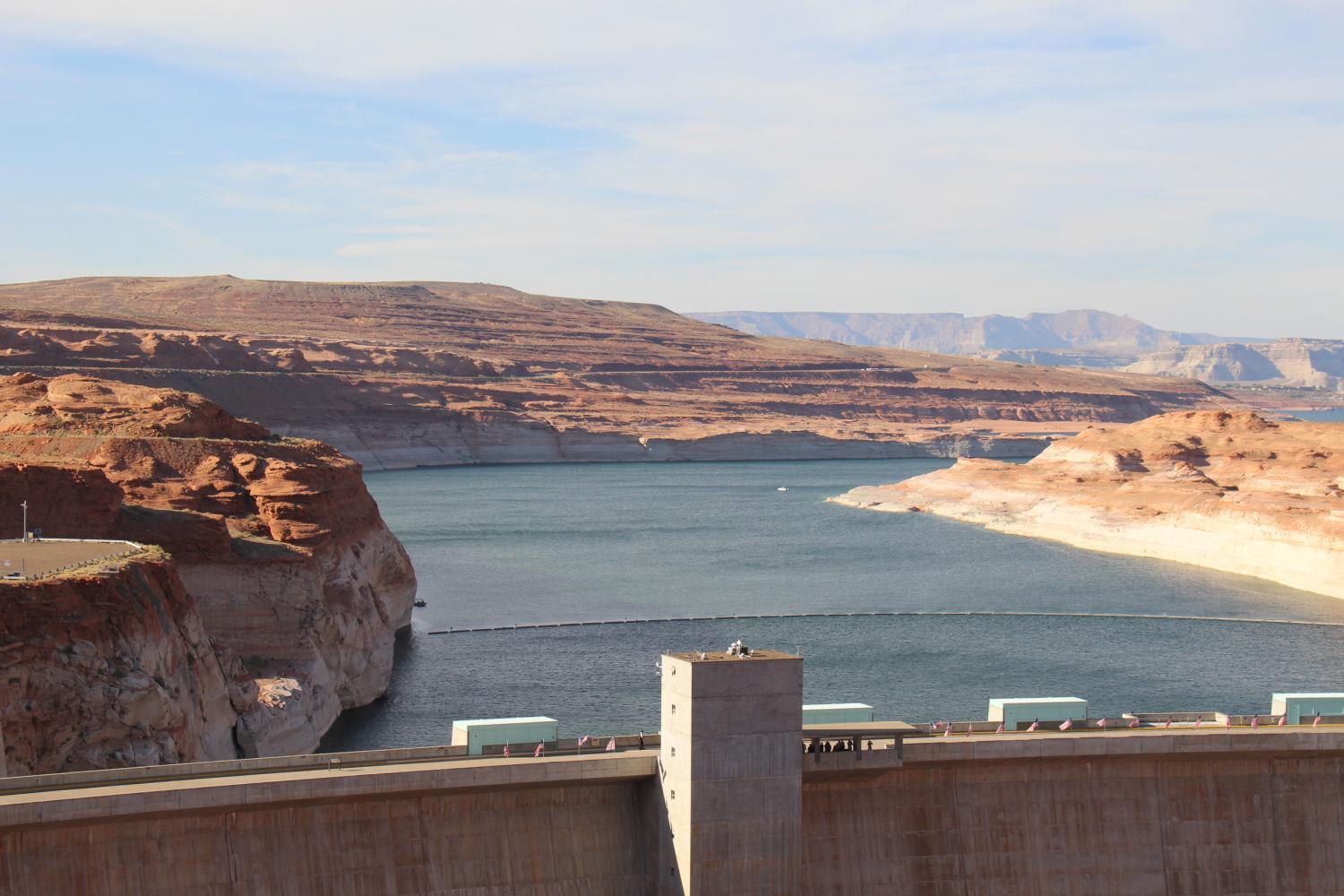 Luke Runyon/KUNC
Lake Powell is impounded by Glen Canyon Dam in northern Arizona. Flows into the reservoir in 2018 were among the lowest on record.

The most contentious portion of the Upper Basin plan is the establishment of a conservation pool in Lake Powell.

Think of the reservoir like a checking account. Water comes in and goes out based on the needs downstream and the levels within its sister reservoir, Lake Mead.

In the last 19 years, the reservoir’s inflow has been above average in only 4 of those years, representing the driest period since Glen Canyon Dam was finished in 1963. More is leaving the account than is coming in, and there’s a growing worry that eventually the check will bounce — the downstream states will ask for water the account is unable to provide. That could kick off years of litigation.

“That is a parade of horribles that we don’t want to see. Mother Nature is really forcing us to the table right now,” said Wyoming state engineer Pat Tyrrell, a principal negotiator on the Upper Basin’s plan.

To keep the reservoir’s account in the black, water managers propose the creation of a savings account within the reservoir. This would be a pool of water that resides within Powell and stays there regardless of downstream demands. It’s meant to make sure the reservoir doesn’t run a deficit. This conserved water would stay in Lake Powell, propping it up, and only get released downstream if the entire account was nearly in the red, sort of like a last ditch emergency cash payment to California, Nevada, Arizona and Mexico.

Lots of unanswered questions remain on how to do that and how much it will cost. From 2015 to 2017 an experimental program that paid farmers not to irrigate spent $4.5 million and resulted in about 22,000 acre-feet of conserved water flowing to Lake Powell. Scaling that program up to make a dent in Powell’s declining levels could take billions of dollars from a yet to be determined funding source.

Tyrrell says at the moment, Upper Basin water managers are just concerned with creating the savings account, and aren’t prepared to start talking details about how to fill it.

“This cake is not baked. We haven’t even opened the door to the kitchen yet,” he said. “All we’re getting so far is the ability to store some water.”

Similar assurances from Colorado water leaders haven’t been enough to assuage the nervousness radiating from the state’s Western Slope farmers. Aspen Journalism’s Brent Gardner-Smith reports one powerful Western Slope water agency, the Colorado River District, is prepared to hold up the Drought Contingency Plan until it’s guaranteed their farmer members won’t see irrigation ditches shut off by the state. The District’s leaders continue to say they can only support a plan where participation in an Upper Basin conservation program is “voluntary, temporary and compensated.”

Will Arizona Capitalize On California's Offer To Cut Back? 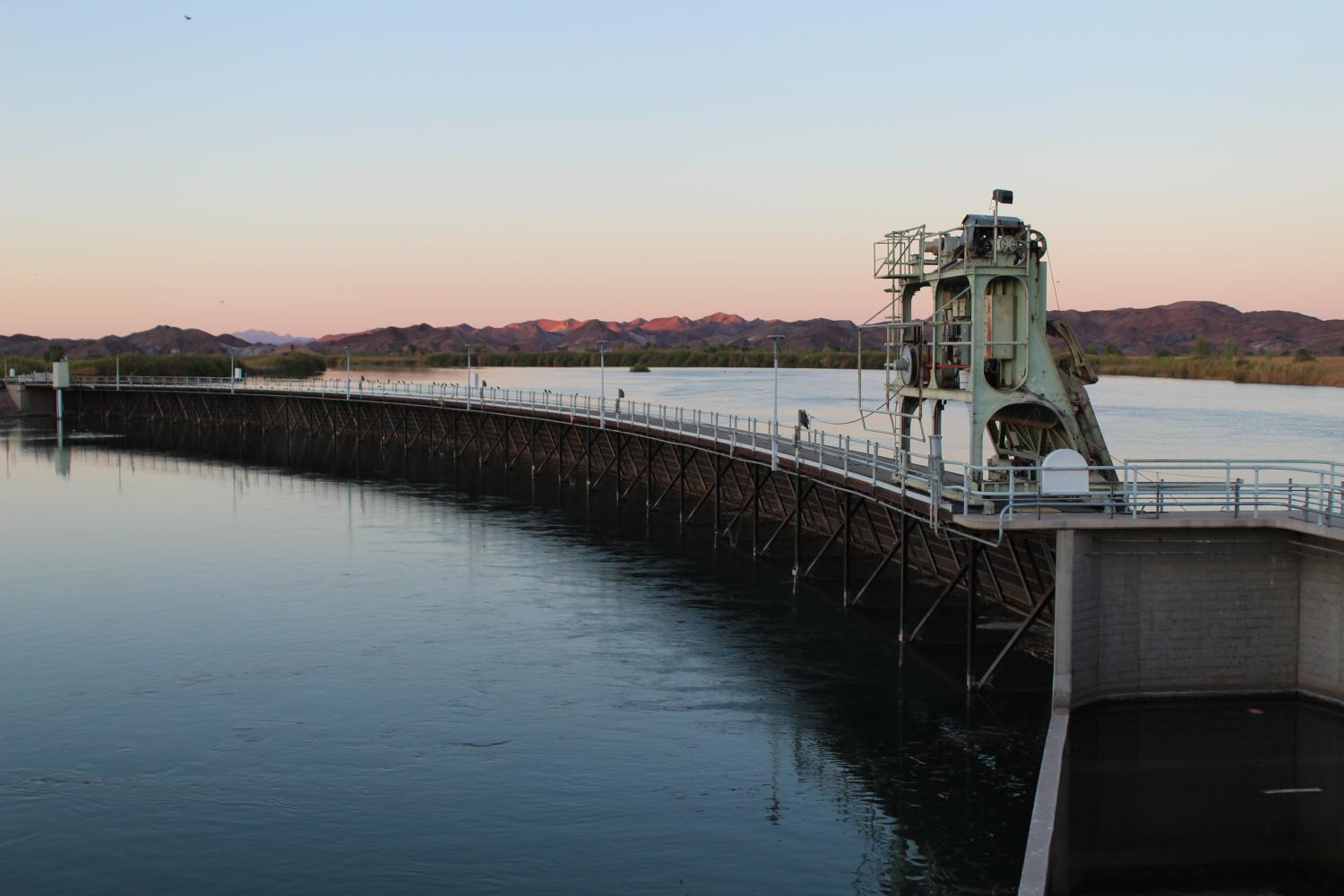 Some Lower Basin water managers see their Drought Contingency Plan as a rare opportunity. For the first time, California is willing to cut back its water deliveries when Lake Mead drops past 1,045 feet in elevation. California has the highest priority water rights in the Lower Basin in times of shortage. Under current rules, the Central Arizona Project, which feeds Phoenix and Tucson, could lose every last drop of its Colorado River allocation before California has to take even a modest curtailment.

In the draft plan, California agrees to cutbacks partly because of an incentive: an approximately decade-old program called Intentionally Created Surplus, or ICS.

Before ICS existed, a water user had to take the water or lose it. But now the program allows a user to conserve water on Lake Mead and then get the water back at a later date, thereby intentionally creating a surplus for itself. The new Drought Contingency Plan would expand the current ICS program by removing ambiguity and adding flexibility about when water can be withdrawn. That provision has broad support.

But without the Drought Contingency Plan, California might want to take its surplus water out before Lake Mead goes into shortage and avoid an argument about it.

“We have heard from California recently that they might get really pushed into a place, without DCP, of taking their water out of the lake rather than have it stranded as we go into shortage as the projections show in 2020,” said Tom Buschatzke, Director of Arizona’s Department of Water Resources at a recent meeting.

Arizona is still figuring out internally who gets cut, and how, in order to conserve water in Lake Mead. One of the groups at the end of the line for Arizona’s Colorado River allocation are farmers in Pinal County. If the Drought Contingency Plan is implemented without a change to internal Arizona rules, these farmers could see their river supply eliminated during shortage.

Water leaders in the state have been negotiating how much water to provide farmers for “mitigation.” Talks will likely go past Thanksgiving, as cities and the Gila River Indian Community are worried the farmers might end up better off than current rules dictate.

What Effect Will Mother Nature, Federal Officials Have? 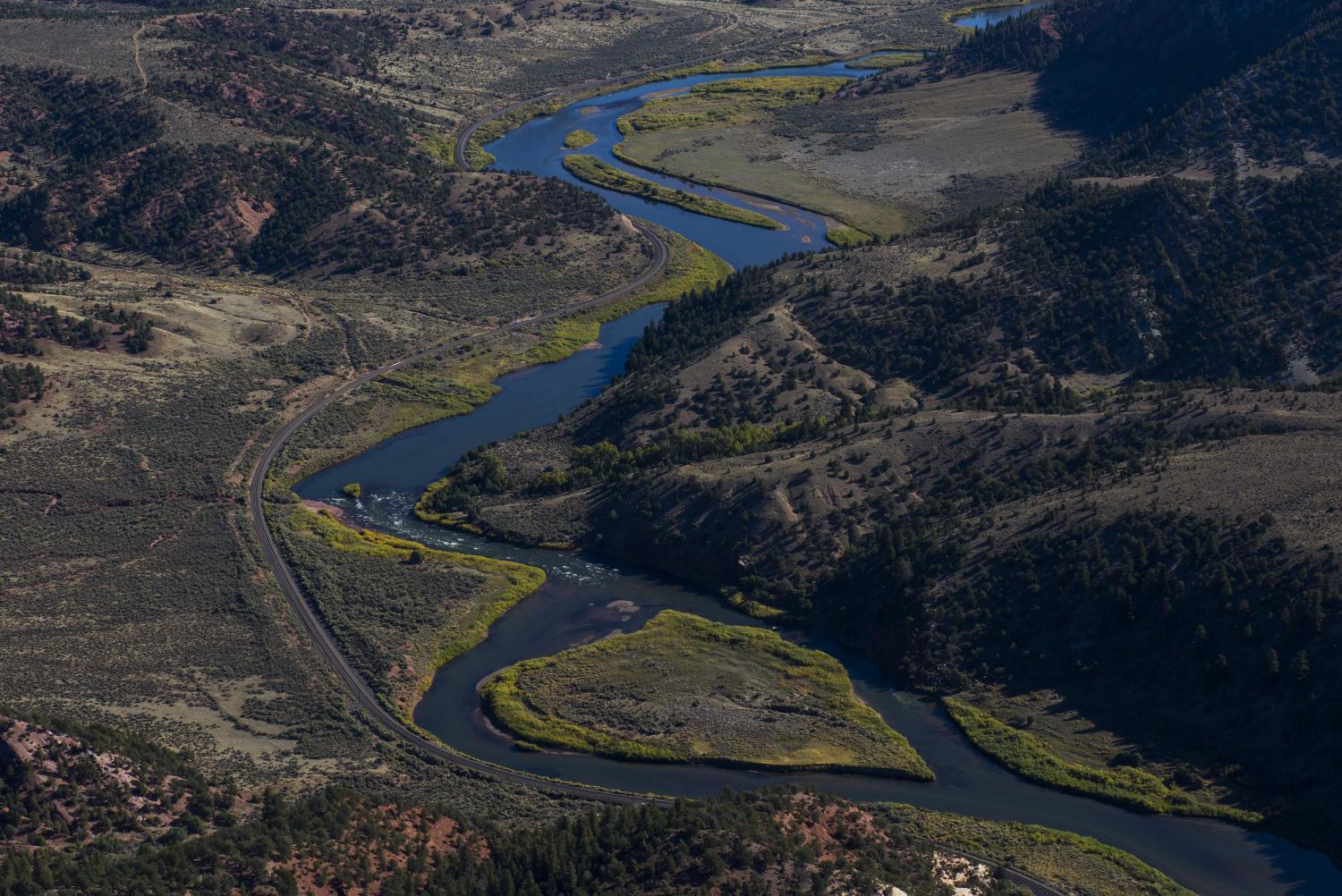 Nick Cote/KUNC and LightHawk
The Colorado River gets its start in the Rocky Mountains, and flows through small farm and ranch communities in Colorado's high country.

Whether these plans move from draft proposals to signed agreements is still uncertain. Outside forces could either speed up or derail the ongoing negotiations.

In August, U.S. Bureau of Reclamation commissioner Brenda Burman gave the seven basin states an end of year deadline to finish their Drought Contingency Plans. Mexico has already agreed to cutbacks, but only if the Lower Basin states finish and sign their plan.

Arizona is the sole basin state that requires state legislative approval before it can officially sign a deal, and there are currently no plans for a special session before the end of the year. Federal officials could give some leeway to that end of year deadline as long as states can show progress is being made.

State officials in the West are adamant they don’t want the federal government steering the ship when it comes to Colorado River governance, and the threat of interference could be enough to get the plans over the finish line.

Another pressure point is the weather. It was the unprecedented dry conditions that forced water managers to the table to come up with the 2007 guidelines, and then again to form the Drought Contingency Plans. The 2018 water year — from Oct. 1, 2017 to Sept. 30, 2018 — wrapped up as one of the driest on record for the entire Colorado River Basin.

If the El Nino weather pattern currently taking shape in the Pacific Ocean fails to pummel the southern Rocky Mountains with wintry storms, expect the heat to get turned up even more to get these agreements done.

This story is part of Elemental: Covering Sustainability, a new multimedia collaboration between public radio and TV stations in the West, and part of a project covering the Colorado River, produced by KUNC and supported through a Walton Family Foundation grant. KUNC is solely responsible for its editorial content.