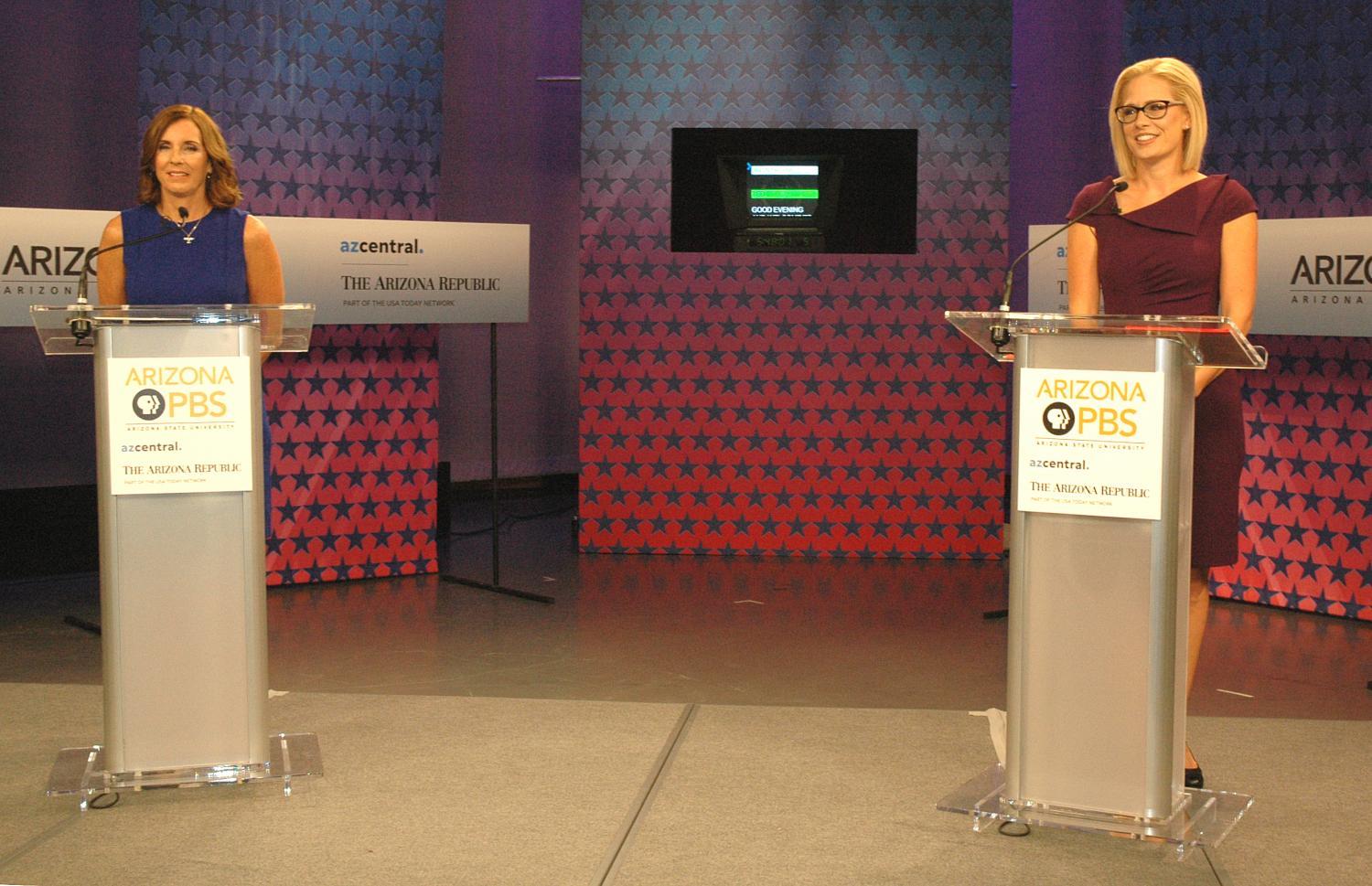 Howard Fischer/Capitol Media Services
Martha McSally (left) and Kyrsten Sinema faced off on Oct. 15, 2018, in their only debate for U.S. Senate.

One of the most notorious ads shows Democratic Rep. Kyrsten Sinema wearing a pink tutu and protesting the Iraq War. You’ve probably seen it. Sinema’s opponent for the Senate, Republican Martha McSally, launched the ad before the primary was even over.

“You know I’m running against somebody who spent time organizing protests and protesting our troops in a pink tutu. You’ve seen the ad, right? Right?” she asked the crowd at a Sun City GOP office in September.

Sinema has said she was protesting the war and not the troops, and there’s a big difference between those things. The ad was rated mostly false by Politifact. But McSally has made no apologies for the tone of the campaign.

“Some people have asked me, like, 'Hey ... why are you putting up a negative ad?' It’s not a negative ad. It’s a public service announcement,” she said. “Cuz the people need to know!”

McSally has said she had to go negative, since Sinema was up on TV early defining herself as a moderate and ignoring her past as a progressive state lawmaker.

Zarrin Henry, a registered Democrat, heard McSally defend the decision on the radio, and it turned him off.

“That ain’t how you run your race, man,” he said. “Come out, tell the people why you want them to vote for you and what you plan on doing.”

Like a lot of Democrats, Sinema has tried to steer the conversation repeatedly toward health care, and says McSally is attacking her to avoid that topic.

“It looks like Martha has continued to do what she’s doing during this campaign, which is to lob negative and false attacks against me, in an attempt to avoid talking about her own record, which hurts Arizonans,” she said at her Scottsdale campaign office in early October.

But Sinema's allies have run some negative ads, too. One ad — co-sponsored by a liberal veterans advocacy group and Democratic nonprofit — accused McSally of betraying veterans because of her votes on health care.

Plenty of pro-Sinema ads have said McSally voted to repeal protections for pre-existing conditions, although the details are more complicated than that.

Arizona’s race for the U.S. Senate has made national headlines for how close it is — and how negative.

So why are we seeing all the nasty?

Kim Fridkin, a professor in the School of Politics and Global Studies at Arizona State University, said different negative ads have different effects.

“If you’re talking about an issue like health care and you’re criticizing your opponent but you’re not doing it in an overly strident manner, that could help depress evaluations of your opponent,” said Fridkin, who studies negative campaigning, Senate races, and women in politics. “In that case, it makes sense to go negative.”

“If there’s lots of ads that are irrelevant and uncivil — that means overly negative, and there are a lot of those — [we] find that that actually leads people to disengage and maybe not turn out to vote.”

Case in point: a Peoria woman this reporter met in a Target parking lot in Glendale. She wouldn’t give me her name because her son is in the military and she said he wouldn't like that. This woman definitely doesn’t like the ads in the Senate campaign.

“Oh my God, those ads are horrible. Absolutely horrible,” she said, recounting that she commutes two hours every day and hears a lot of political ads. “Honestly, it reminds me of petty school ground, catty girls, just going at each other. So, I just prefer to distance myself from that.”

She said she might not vote in the Senate race because of the ads, and that she didn’t vote in the 2016 presidential race for the same reason.

Fridkin said certain voters are more likely to be turned off from the negativity and not vote.

“It does depress turnout among people who are less interested, among women, among independents. And so, that would definitely hurt Democrats more than Republicans.”

Fridkin doesn’t know if depressing Democratic turnout is a strategy of McSally’s.

What is clear is that Arizona’s Senate race has seen some of the highest spending in the country including ad spending. And this in an era when so many voters don’t need to be persuaded at all, people like registered Republican Michael Castiglia of Glendale.

“I like the direction of where this country is going right now so for me, anybody that is in line with Donald Trump, I’d be willing to vote for,” he said.

Early voting is still going on, and the last day to vote — Election Day — is next Tuesday.