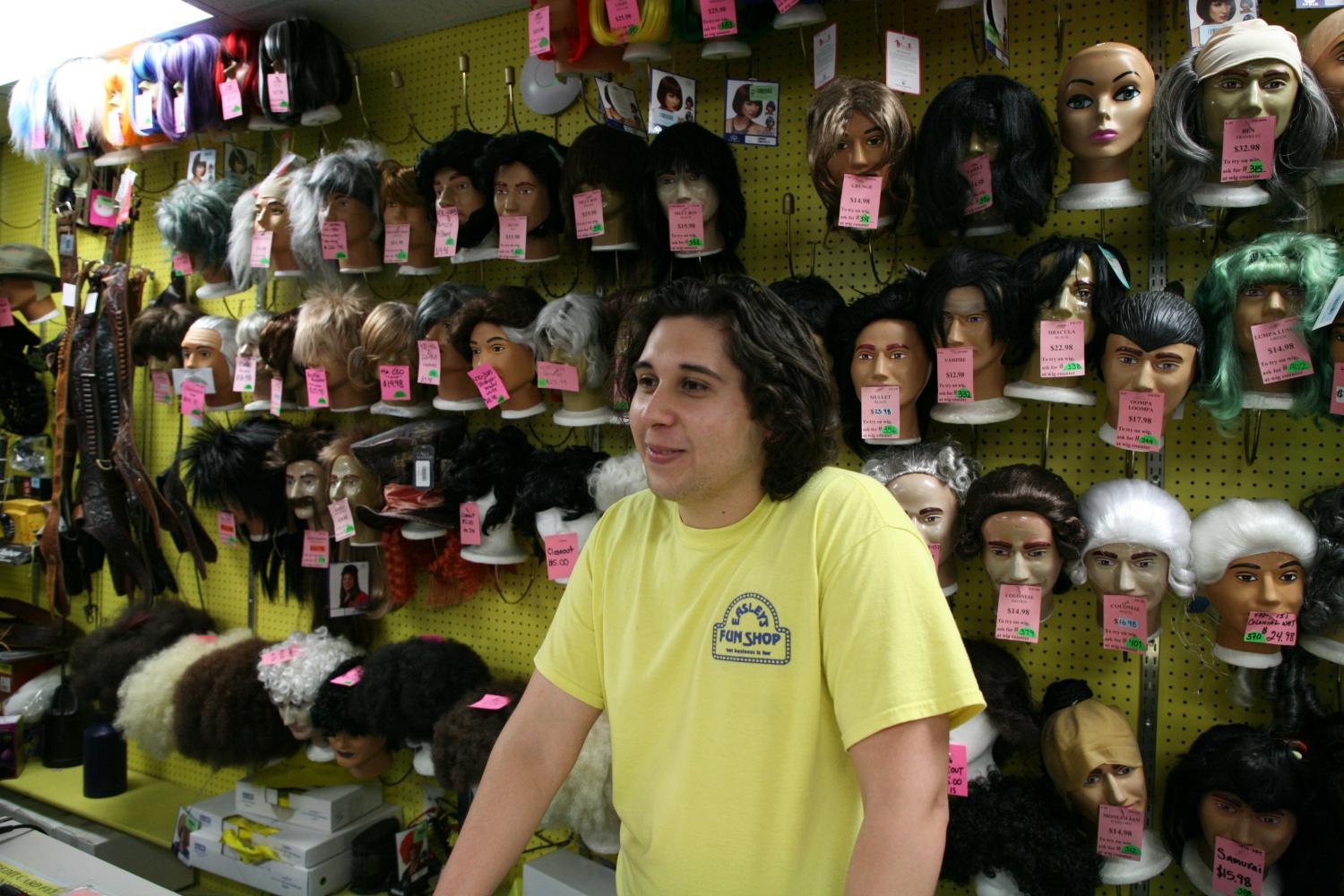 Stina Sieg/KJZZ
Easley's Fun Shop, a family-run costume store, will soon be closing its doors after 72 years in Phoenix. Employee Mike Hernandez stands in front of some of the store's many wigs.

Generations of Phoenix-area residents have known just where to go for the perfect Viking helmet, fairy wand or creepy clown mask. Easley’s Fun Shop has been in business since 1947 in Phoenix, but the family-run costume store has announced it will be closing its doors near Central Avenue and McDowell Road by the end of the year.

That means this Halloween will be its last.

There is nothing like the overwhelm of stepping into Easley’s for the first time. It’s visual overload, from the racks stuffed with bright, shiny dresses to the fuzzy, mascot-like animal heads stacked to the ceiling. There are more wigs than you can count and a line at the register that doesn’t seem to get shorter.

The place is upbeat and hectic, with no obvious signs of disappearing soon.

But you can see it in Ashley Butler’s sad smile.

“It’s like losing a big part of your family,” she said, from behind the makeup counter.

This is where the 34-year-old feels most at home, surrounded by little pots of foundation ranging from peachy pink to deep blue. Her great-grandfather, Bert Easley, started Easley’s Fun Shop as a magic store back in 1947.

“I’m going to miss more than just working here,” Butler said. “I mean, I pretty much grew up here.”

Stina Sieg/KJZZ
Debbie Easley, whose grandfather, Bert Easley, started the store, chats with Lawanda Price, who now will have to find a new place to get her saucy couples costumes with her husband.

That’s why she’s not thinking about the future quite yet. She’s focusing on what this shop is all about: helping people transform into whatever they want.

No rules, no judgment. Three-year-old Delilah Espinoza found a Wonder Woman shield and fell in love with it — even though it’s an unlikely addition to her Bat Girl costume.

Lawanda Price, 82, takes the freedom of this place in a completely different direction.

Price and her husband never know what they’re going to be until they start wandering the aisles here. This year, they settled on a 1940s-era nurse for her and a badly injured pilot for him. But Price, who popped a curly red wig on her head, was already thinking of Halloweens to come.

“He can be Daddy Warbucks next year,” she said, gesturing to her bald beau. “And I’ll be Little Orphan Annie!” 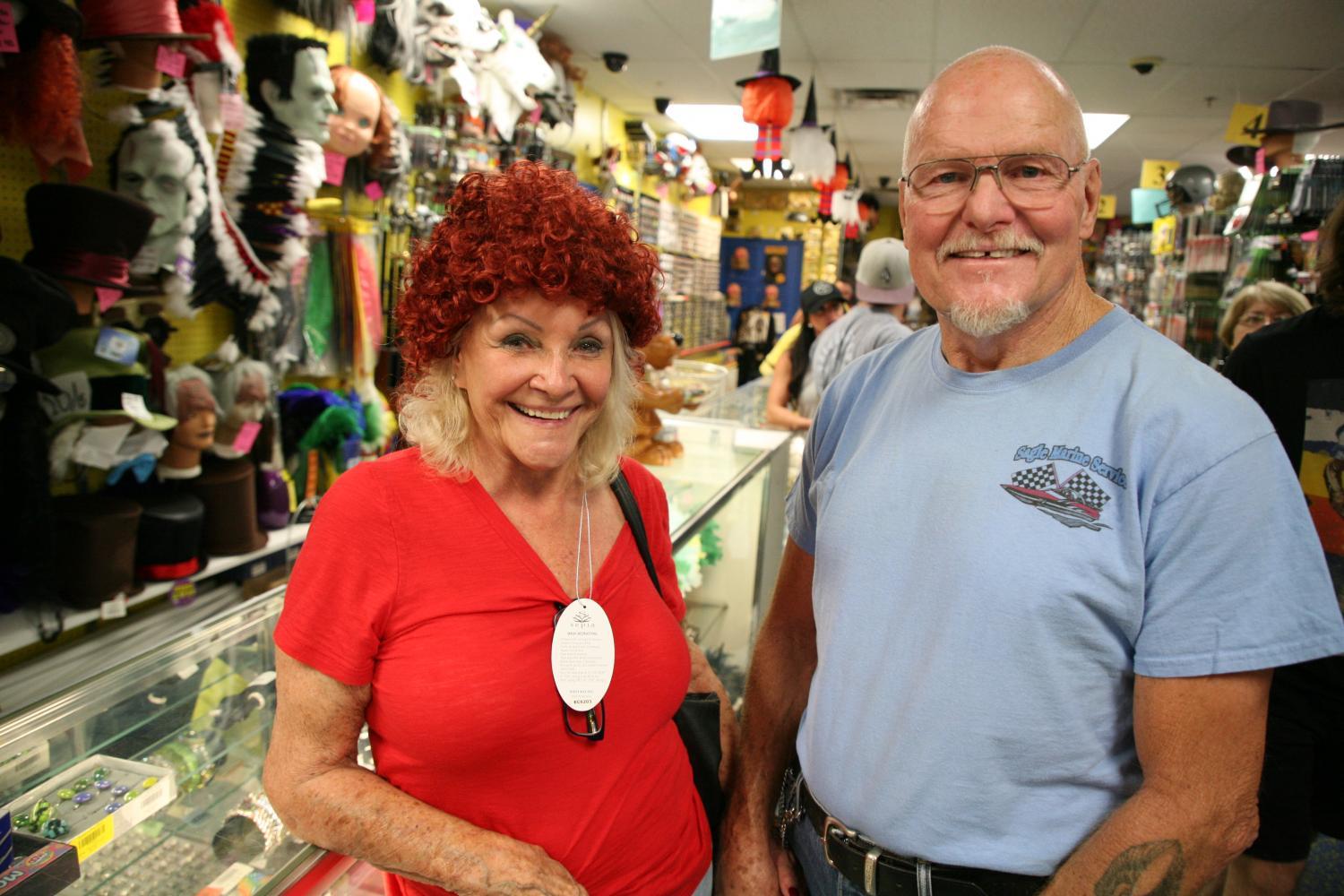 Stina Sieg/KJZZ
Lawanda and Roger Price have an Easley's tradition. They don't plan their couples costume until they get to the store and start exploring. Lawanda is wearing a prop for next year's joint costume: Daddy Warbucks and Little Orphan Annie.

She then chuckled about the scandal of it all, saying those are the kind of costumes that tend to win contests.

A few aisles over, 35-year-old Richard Mansfield and his wife, Dorin, were also shopping for couples costumes. They were thinking Mario and Luigi, but also characters from the cult classic “Monty Python and the Holy Grail” —  including that man-eating rabbit.

“OK, so this place has an obscene amount of selections for giant bunny heads,” Mansfield said, “and they’re all terrifying!”

Mansfield came for the closing sales, but also the nostalgia.

“This is like an Arizona institution,” he said. “I’ve known about this place since I was, like, 10. I used to buy practical joke kits, you know, like hand buzzers and fake dog poo, and stuff like that — which they still have in the back.”

For many people, seeing Easley’s close down feels personal, but for no one more so than Debbie Easley. She greets all the customers she can — and hugs some goodbye, too.

“So, good luck you guys!” she said, patting the future Little Orphan Annie on the back.

Easley, whose daughter is Ashley at the makeup counter, helped handpick everything in the store, and it was her grandfather who started this place.

She had some of her first memories here. 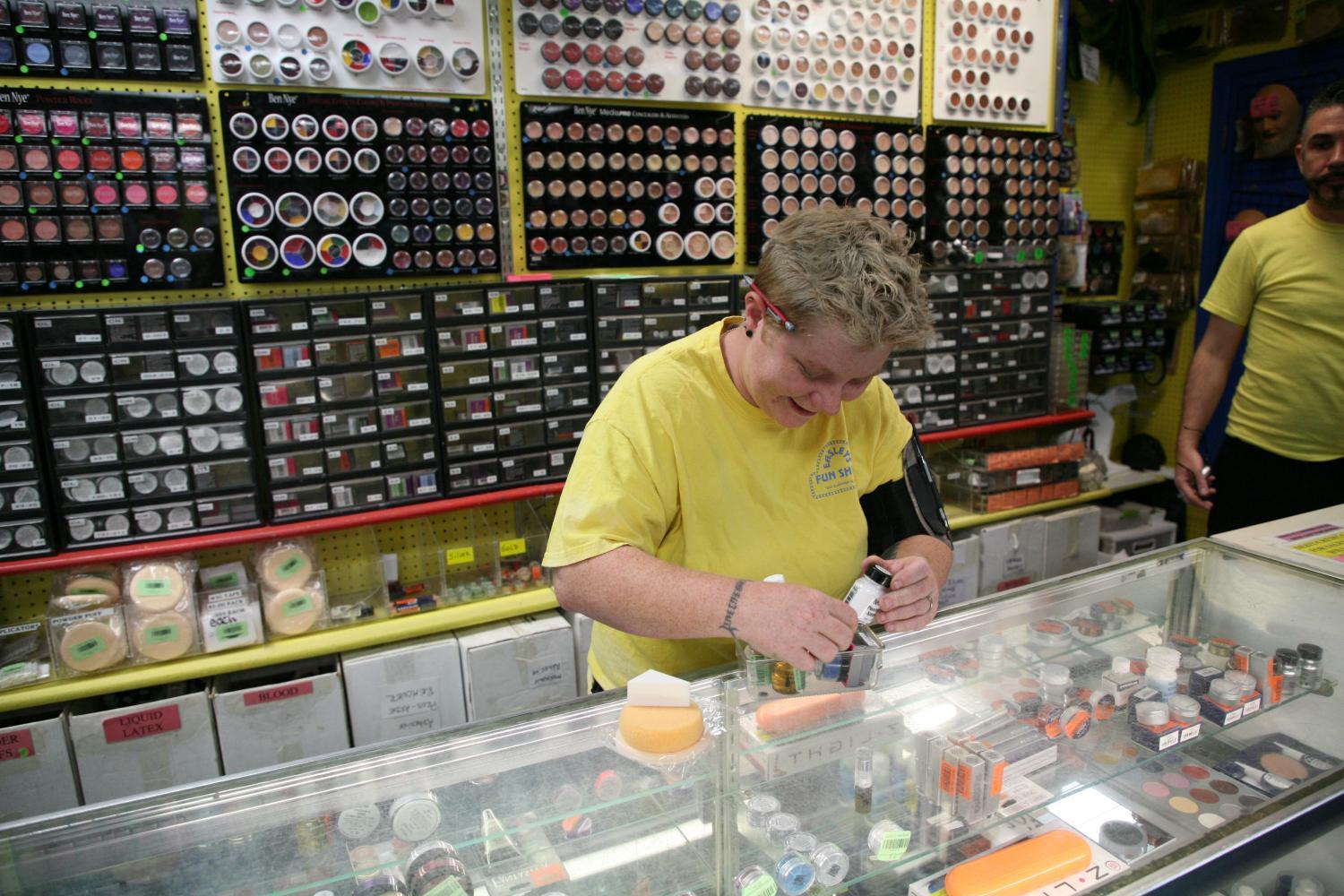 Stina Sieg/KJZZ
Fourth-generation Easley Ashley Butler says she's not ready to think about the future quite yet. Her great-grandfather started the place, and she's spent much of her life working here.

“My blood, my heart, my soul is here,” she said. “Yeah, this is — everything, everywhere you look is me.”

Now, Easley’s is going the way of other independent costume shops around the county, in Las Vegas and Mesa, Santa Barbara and Everett, Washington. It’s hard to compete with the Internet and those pop-up Halloween stores that rise like zombies every fall.

“You know, it’s just change. It’s just changing with the world, and we’ve got to adapt or die,” she said. “And I’m not ready to die yet!”

That’s why even after this bright yellow building on McDowell Road shuts its doors, Easley’s will live on online — and in the hearts of everyone who’s bought one of those terrifying bunny heads.