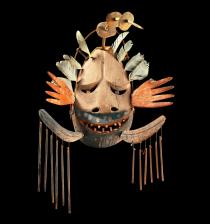 LAUREN GILGER: When you think of Henri Matisse you might think of his use of color in works like the open window, or the primitive style he adopted in the famous painting called Dance. Matisse experimented with many styles in his career, and now a relatively unknown project by the French master is taking center stage at the Heard Museum. “Yua: Henri Matisse and the Inner Arctic Spirit" opens Monday at the Heard and it displays portraits he made of indigenous and Alaskan Yupik people based on a collection of their traditional masks. The portraits are displayed alongside the masks themselves, which are for the first time in this exhibition, being reunited in the pairs in which they were originally created. They have been separated bought and sold by collectors around the world until now. It's been a labor of love for co-curators Sean Mooney with the Rock Foundation and Chuna McIntyre, a Yup'ik artist and Elder. I met Mooney at the Heard as the execute exhibitions walls were being constructed a few weeks ago, and he started by telling me about the title of the show — "yua". What does that Yup'ik word mean?

SEAN MOONEY: So the word yua, it means spirit. So it's the word in Yup'ik language that refers to the animation of the person. And so it's the personal spirit of whichever entity, so all animals have yua, all elements of the sky, and the weather, and the trees and people. And what's beautiful about it is that it's a kind of reincarnation seem that when an animal or a person dies its yua is released and it returns into another form. So that's something that celebrated Yup'ik culture that everything has a kind of consciousness, or spirit that pervades throughout society and throughout the world. So what we're calling the show is "Yua: Henri Matisse and the Inner Arctic Spirit." And the idea of that is, that Matisse had this somewhat accidental introduction to the Arctic through his son in law's George Zutes, who is a writer, who had invited him to do illustrations for a book that he had written that was kind of a surrealist fantasy story about Arctic people wandering around New York.

MOONEY: Yes, they're drawings, mostly prints. So he was asked to make three drawings and he was given several books to look for images of Arctic people, and canoed Rasmussen's field report from 1927 things like that. And so Matisse being Matisse, did something like 50 drawings based on those photos. In the course of doing that, it sort of inspired him to do a completely new body of work which he referred to as masks. And Matisse, as you normally would do, would start with a portrait of a person and then he would refine that drawing over and over again — work in series. And each time the drawing would get more and more simplified to the stage where he would call this drawing a mask. So all of the drawings, even though they're recognizable portraits, you see him transitioning from the real to the abstract. And it's not really abstract, but it's still a portrait but it's much simplified. So when he got the invitation from Datuwey, they showed him the mask collection that Datuwey had brought back from New York. And Matisse was so struck by them that he really struggled to understand whether he could do this. How could I work with the same precision as the formality of these masks? So he really investigated a lot of time and effort in creating these so-called mask drawings which came out of that.

GILGER: So in this exhibition you are pairing them up right? You've found the masks that he based his drawings on, and you've managed to also find the artist who did the masks — which sounds like it was quite an undertaking.

MOONEY: That’s a really powerful part of the show. The pairing of masks is an important element in the traditional contexts that they were made. So the masks were made for dance performances. And imagine that you're in a Yup'ik village in the late 19th century, and by their tradition they would have seasonal gatherings that were used often in the winter. There dance performances that are in a way a form of prayer. So you're asking the spirits of the animals to return to you. And so in the structure of Yup'ik dancing, the masks are often presented as the dancers are in pairs or quartets and they follow a song verse structure. And so visually, many of these masks — when you see them in pairs — they're symbiotic so they're almost symmetrical. So George Hive's, the founder the Museum of American Indian New York, he had a collection of least 400,000 objects by 1916. And he had many pairs of Yup'ik masks, and he would say, "Well, I've got two of these they put one in the museum put the other one in storage." So they were immediately separated from the moment they were collected. So in my work we've been trying to put these pieces back together and present them to the public. And what is really extraordinary and very emotional about that is that it's like anybody's family — even if it's not your family. When you see two parts — two members of family —who've been separated for a long time it's a very moving experience. We've only in the past been able to reunite one other pair of masks permanently. In this occasion, which is really unique to the Heard, we'll have at least 12 pairs of masks reunited — plus other related groups and that's really extraordinary.

GILGER: So, you talk about them as a family but there's also this historic and spiritual aspect of this. Tell us what this might mean and if it does mean anything maybe to your co-curator on this or to day Yu'pik people?

MOONEY: It's really extraordinary for the Yup'ik people. There's a quirk of history that these masks were collected at a time when there were missionaries going to Alaska, and people were losing their traditional ways because they were being converted to Christianity. When you speak with Yup'ik elders about the masks in museums, they're actually very grateful that the masks have been preserved because there's a huge gap of three generations where masks were not made and the dancing was ultimately discouraged by the missionaries. So it's allowed them to rebuild the tradition, and what's really great is that now you can go on YouTube and you can see the present day festivals dance festivals all over Alaska on an annual basis.

GILGER: Doing it again. So there's layers of this right. There's 100 years ago, there's the traditional masks, there's the Matisse and the '40s during World War II drawing them and then now you know reuniting them again. I wonder how you feel about the sort of moment that you've been able to create here.

MOONEY: It's fascinating and terrifying and really enriching. And I can say that I've been working in museums since the mid-'80s, and I have hundreds of shows under my belt and this is one of the highlights of my career. I can't say how rewarding this is. It's very emotional to see the whole process. We've identified some of the makers of some of these masks because we've been in touch with the family members of the descendants of the carver — so for the first time in the show we're actually naming the master artists of Yup'ik masterpiece sculpture. So they're being recognized for the first time, and there's just so many details that we're able to share in this show. It was a big surprise even to us when we're putting this together how much we learned in the process.

GILGER: Shawn Mooney, thank you so much.

MOONEY: My pleasure, thank you.