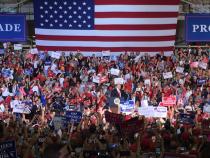 President Donald Trump held a rally in Mesa on Friday night after a day of fundraising and touring Luke Air Force Base.

Trump, trying to hold onto Republicans' narrow 51-49 advantage in the Senate, said a vote for Sinema "is dangerous" because it would empower Senate Minority Leader Chuck Schumer and House Minority Leader Nancy Pelosi.

He also returned to many of his anti-immigration tactics from the 2016 campaign.

Despite saying his campaign was doing well with Hispanic-Americans, Trump spent a good portion of the rally drumming up fears about immigration from Latin America.

Alluding several times to an alleged impending migrant crisis that threatened to overtake the southern border, the president warned that his opponents were pushing a radical immigration agenda that would bankrupt the country:

Trump urged the capacity crowd to vote, warning that his accomplishments could be undone if Democrats take the House of Representatives.