Q&AZ: What Is The History Of Japanese-American Internment Camps In Arizona?

Amid fear and anger and prejudice, the American government imprisoned its own people during World War II.

Laurie Jackson, Susie Karsky and Stacey Anderson all had questions about how Arizona recognizes and remembers the Japanese internment camps located in Arizona in the 1940s — 144 people voted for this topic in our first Q&AZ voting round.

It’s impossible to encapsulate this painful, complicated chapter of history in a few minutes of radio or a block of text you can read in a sitting. Instead, here are the perspectives from people that live in our community who have lived through and studied these events.

In 1942, the road became part of the exclusion line. A government created boundary that stretched from Washington to the Arizona-New Mexico border. In the Valley, if you lived north of the line you could stay in your home. If you lived south of it, you likely became one of more than 120,000 people of Japanese ancestry forced from their homes and stripped of their property and rights following the attack on Pearl Harbor.

There were 10 camps nationwide, including two in Arizona. The Gila River internment camp opened in July 1942 and was home for 13,348 people, mostly from California, at its peak. 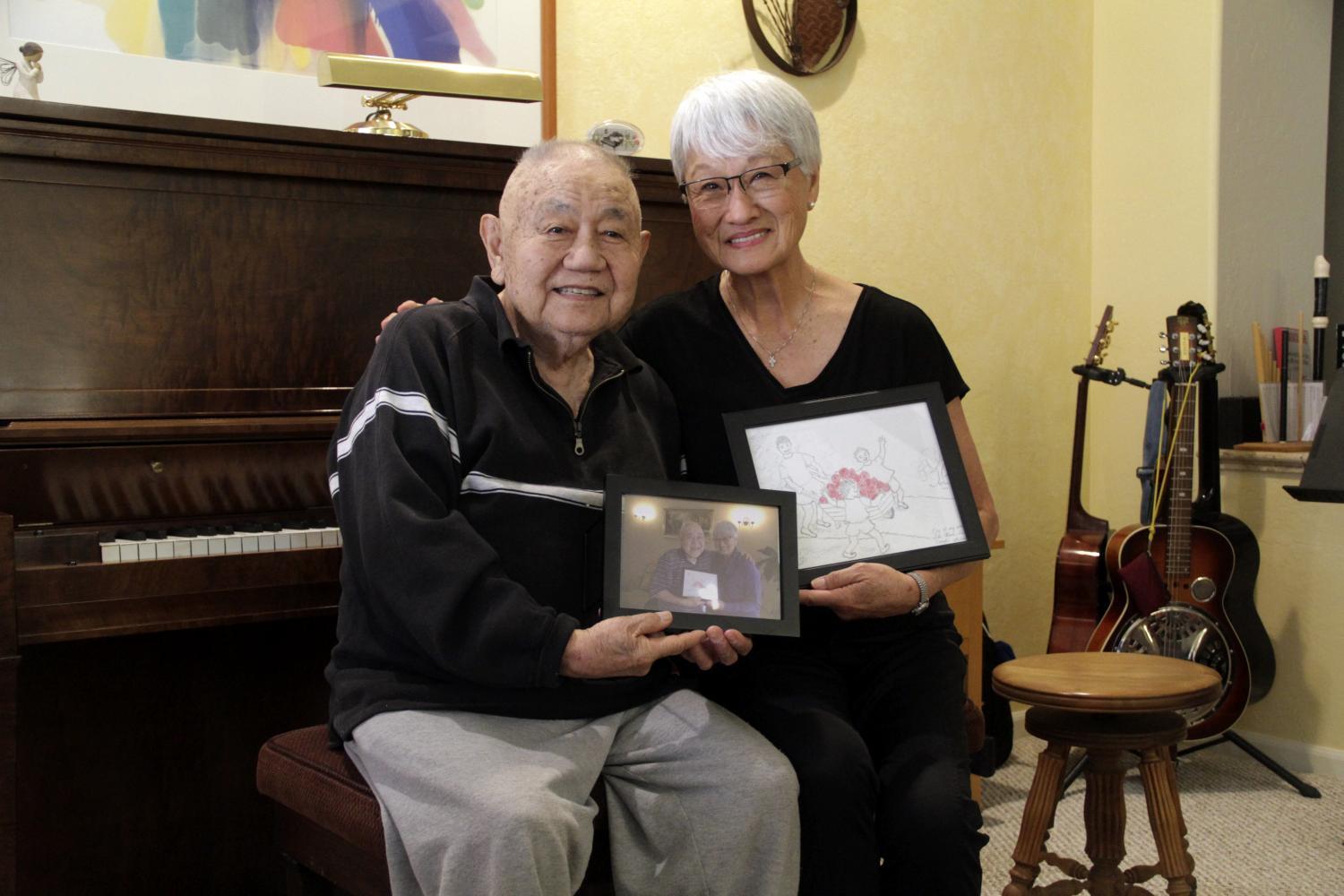 Mariana Dale/KJZZ
Tom Koseki and Midori Hall were both internees at the Gila River camp, but only reconnected as adults a few years ago.

Billy Allen grew up about two miles north of the internment camp on the Gila River Indian Community.

“Nobody really knew what was going on,” Allen said. “Really, the tribe did not approve or allow it.”

Allen was history teacher in Casa Grande for 30 years and taught his students about Arizona’s past, including its role as the site of Japanese incarceration.

“History was alive and taking place around here,” Allen told his class.

The Colorado River camp, or Poston, located near Parker, held 17,814 at most, making it the third largest city in Arizona at the time. Both camps closed in 1945.

Midori Hall was born in the Gila River camp and spent the first years of her life behind barbed wire less than an hour from Phoenix. Her family lived in barracks, others remember the food was terrible.

“I didn’t know anything about it until years later,” Hall said. “My family just wanted to move on.”

Hall moved back to Arizona as an adult. She heard Chandler had named a park commemorating Japanese incarceration. She went to a dedication in 2017 in hopes of learning more about her own history.

“The word nozomi means hope in Japanese,” said Chandler Mayor Jay Tibshraeny at the dedication. “So it is fitting that we stand here today — remembering those who lived through a dark time with little more on their side than hope for a much better future.”

Hall has a few vivid memories from life in the internment camp and one stands out among the rest.

“From the edge of the camp, I saw this huge cloud of dust and out of the dust were three boys,” Hall said. “One tall boy pushing what I later learned was a wheelbarrow with some fruit in it — red fruit in it — and there were two boys on either side of the cart just laughing and having a great time.” 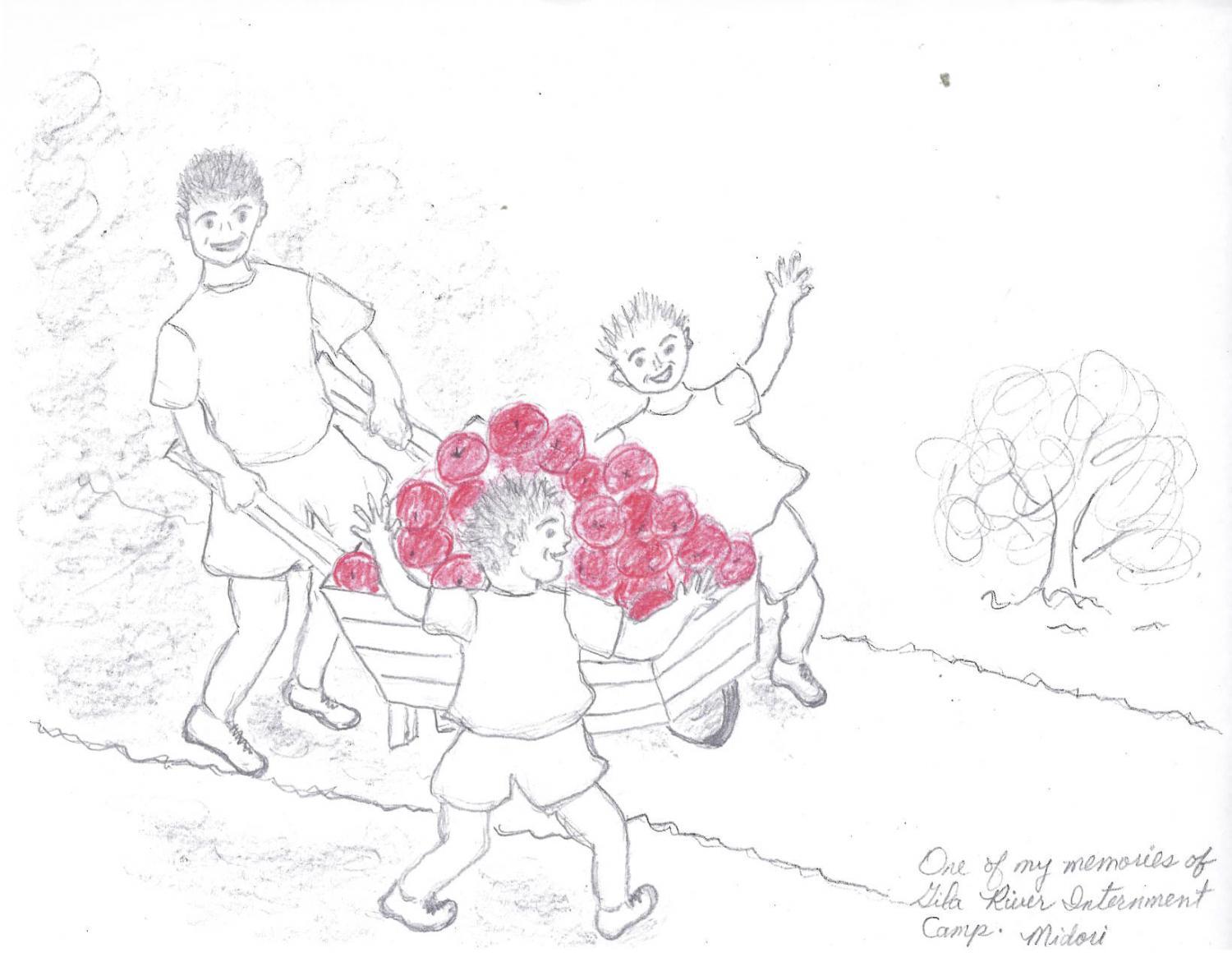 Midori Hall
Midori Hall has a few memories from the first years of her life at the Gila River camp. One of the most vivid is of three boys, rushing out of the desert dust, pushing a wheelbarrow of red fruit.

She shared the recollection with those she met at the dedication, including with a fellow internee, Tom Koseki.

On a recent September day, they were seated in Hall’s Gilbert living room. Tom’s just plucked out a song he learned in his Navy days on the ukulele.

It turns out Koseki was one of the boys from Hall’s memory. He’d bought the red fruit in the cart, which were pomegranates, from a woman who lived near the camp.

“Great big pomegranate like that,” Koseki said, spreading his hands around an imaginary softball. “I had a hard time opening it up, but I got the red berries and, oh my gosh, it was so heavenly.”

Koseki and Hall talk about the camp and about their pasts. He’s told her about growing up in Los Angeles and Utah, how his peers hit him and tore his clothes.

“I knew that they were school kids and they didn’t know any better,” Koseki said. “I guess their parents told them not to associate with Japs.”

Hall looked across the table at Koseki.

“You have a wonderful spirit, and you’ve overcome a lot of your bitterness, and that’s a wonderful thing,” she said.

Koseki went on to serve in the Navy, but he’s never shaken how his heritage shaped how he was treated.

“Unfortunately, if you were born of a certain race that was in war with America, you don’t have a chance. You just have to go along with the program.”

“Some ... still don’t share their stories, and they take them to their graves, and that’s a loss for the community.”
— Donna Cheung, Japanese American Citizens League Arizona chapter president

Koseki and Hall are unique in their openness about what happened to their families.

Donna Cheung is president of the Arizona chapter of the Japanese American Citizens League and has spent years trying to get  elders to talk about what they’ve experienced.

“Some of them still don’t share their stories, and they take them to their graves, and that’s a loss for the community,” Cheung said.

Richard Matsuishi is a dentist and professor and he was 4-years-old when his family was incarcerated in Arizona. He doesn’t remember his parents ever talking about their experience at the Poston camp near Parker.

““They were citizens and all their constitutional rights were taken away. So who do you go to?” Matsuishi asked.

“Matsuishi researched his family’s history on his own and has passed it down to his children and their grandchildren.

““We have to learn from history,” Matsuishi said."

Cheung who is Chinese American, she says it’s not just the responsibility to Japanese Americans to be stewards to the legacy of wartime incarceration.

“I’m not of Japanese descent, but the mission and the story and the lesson of wartime incarceration for Japanese Americans resonated with me because of my belief in civil rights and upholding civil rights and the constitutional rights of everybody.”

Cheung said those rights can be taken away if people from all backgrounds do not stand up against injustice. 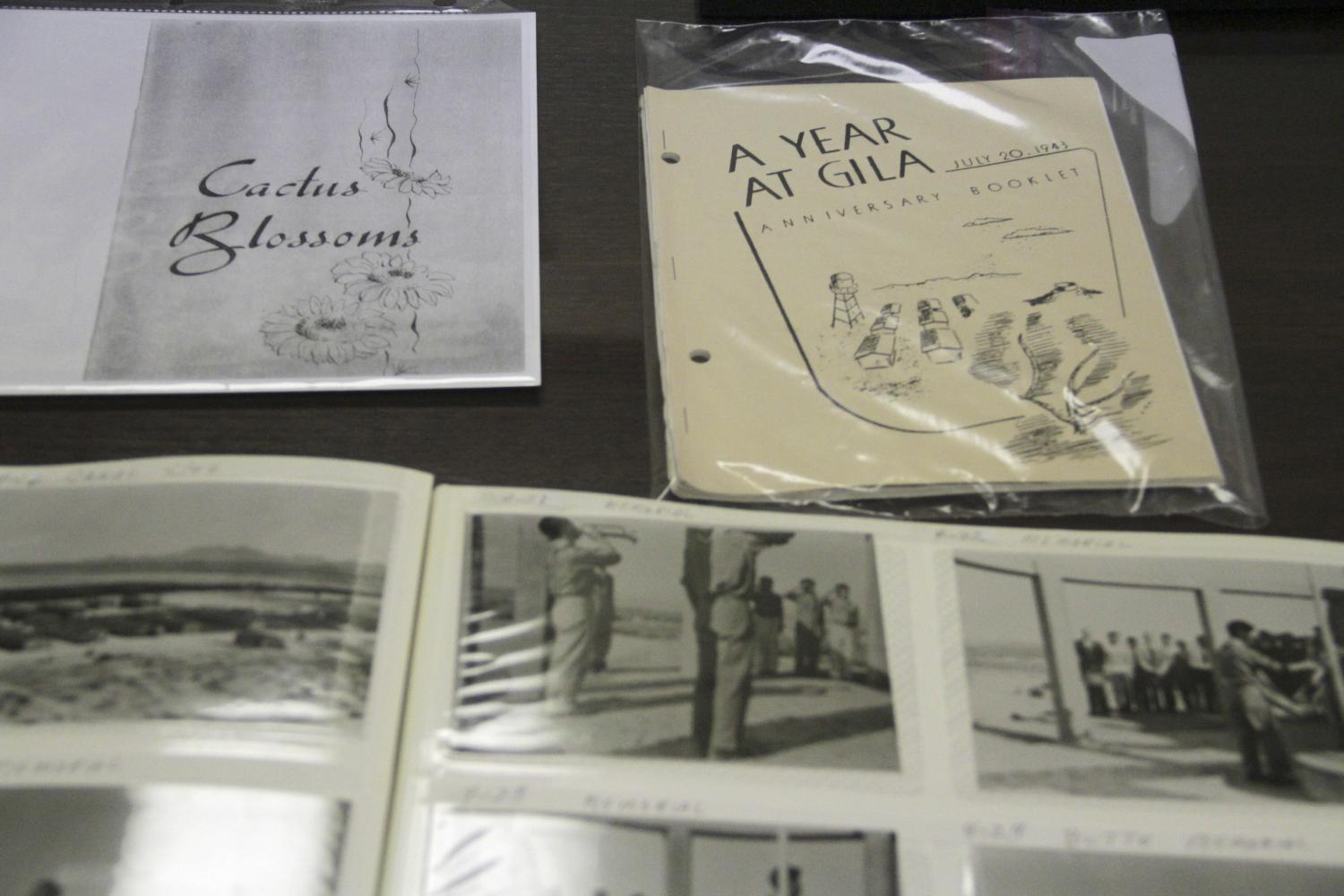 In the early 1900s, there was a flourishing Japanese baseball league.

Bill Staples, a Chandler resident and baseball historian, actually wrote a book about one of the league's most famous players and coaches, the “Dean of the Diamond” Kenichi Zenimura.

Zenimura was incarcerated at Gila River.

“I was really trying to understand how one can find happiness and freedom in a world that’s less happy and free,” Staples said.

Soon after Zenimura arrived at Gila River in 1942, he and some other men decided they needed a baseball field.

“Late at night, they’re standing around, I think, a trash can with a fire coming out of it and he decides ‘OK, we’re going to build another field,’” Staples said. “So what they start to do is steal some extra wood for a back stop.”

Their outfield was castor bean plants, kind of an Arizona take on the corn stalks in the film "Field of Dreams," and the field lines were flour.

What was originally a covert operation turned into a league of baseball teams both within Gila River and across the internment camps throughout the country.

Staples became so enamored of the story he advocated for a park to be named in recognition of Zenimura and the experience of Japanese internees. About seven years after he became immersed in the history, Chandler dedicated Nozomi Park.

“It’s about more than just baseball,” Staples said. “It’s about making sure we don’t make the same mistakes that we did in the past with regards to how we view people who are different. Those who may look like the enemy of the day if you will and not creating a culture of fear and hate.”

Where To Learn More Japanese Internment In Arizona

Nozomi Park
250 S Kyrene Road, Chandler
Previously called West Chandler Park the city elected to change the name to Nozomi, which means hope in Japanese in 2011. There’s a kiosk just south of the baseball fields that explains the experience of Japanese internment that happened a few dozen miles away.

Poston Memorial Monument
23701 Mohave Road, Parker
A concrete pillar grows from a stone lantern at this roadside memorial to the Poston internment camp where 17,867 people were incarcerated. The camp’s size made it the third largest city in Arizona in September 1942.

Gila River Internment Camp
Gila River Indian Community
The site of the camp is closed to the public. Those interested in visiting the camp must apply for a permit through the tribe’s Natural Resources Standing Committee.

Mt. Lemmon
Gordon Hirabayashi was one of the 120,000 people of Japanese heritage ordered to relocate in 1942. The then-college senior “challenged the constitutionality of internment” and he was sentenced to the Catalina Federal Honor Camp on Mt. Lemmon. You can camp and explore the remains of the camp.

Chandler Museum
300 S. Chandler Village Drive
Opening Dec. 8, 2018. One of the first exhibits in the brand new Chandler Museum will be Gaman: Enduring Japanese American Internment at Gila River. “Gaman is this concept in Japanese culture of facing the seemingly unbearable with grace and dignity,” said Chandler Museum Administrator Jody Crago. “That’s truly what these people did.”  The museum received a national award for its previous exploration of this chapter of national and Arizona history.


Arizona State University archives
ASU has archived more than 5,000 pages of Arizona internment camp newsletters. You can explore the collection online and get an intimate look at daily life in the camps from baseball games to births and deaths.

The Arizona State Library
Look at digitized scrapbooks, documents and letters (including one from Arizona's Governor at the time concerned about "enemy aliens of any kind" being relocated to the state.)

EDITOR'S NOTE: This headline has been updated to clarify that those held in the camps were Japanese-American.

EDITOR'S NOTE: This story has been updated to include more resources. 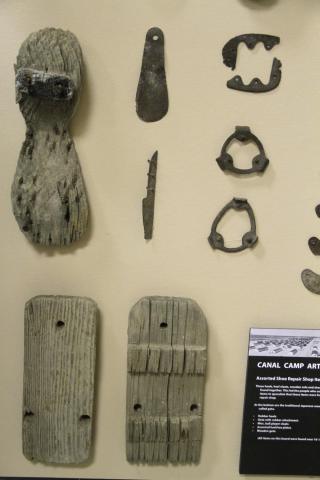