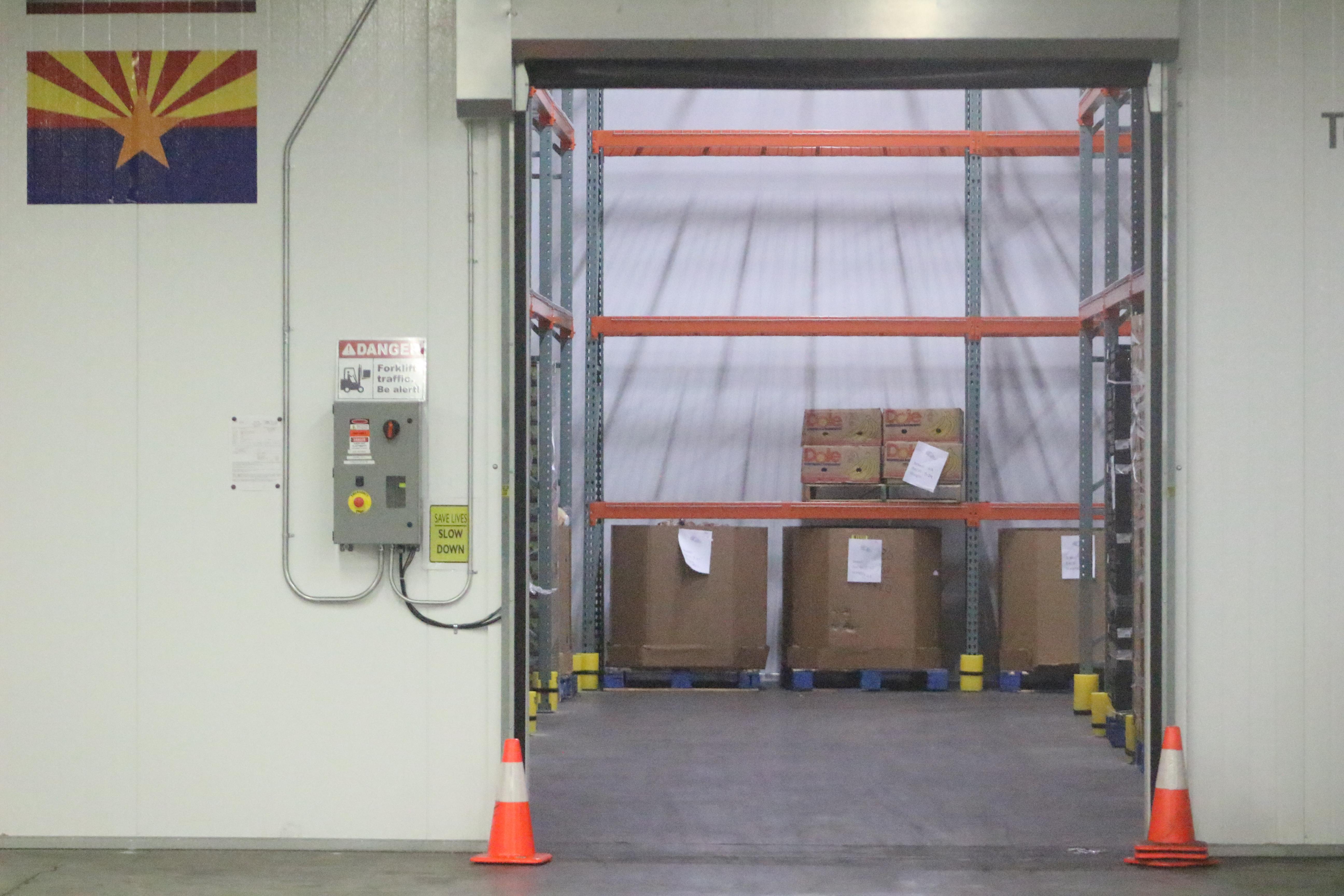 Bret Jaspers/KJZZ
United Food Bank in Mesa recently commissioned this cooler. It's about to get a lot fuller — and not just because the annual harvest is coming in.

At the United Food Bank warehouse in Mesa, the walk-in freezer and coolers have a lot of space right now. But this fall, they’ll be chock full, and not just because produce season starts in October.

“We’ll get lots of chicken, lots of pork, we’ll get lots of fluid milk,” said Dave Richins, president and CEO of UFB at its warehouse in Mesa. The organization distributes about 21 million pounds of food each year to a five-county area.

Remember when the Trump administration announced a $12 billion aid package for farmers to help with the effects of the trade war? About a tenth of that money will go to buying crops that people in China are not buying. The food, of course, needs a place to go. Much of the bonus will head to food banks around the country.

The Food Purchase and Distribution Program from the U.S. Department of Agriculture, along with an increased amount of food coming from an annual USDA harvest program, will increase UFB’s distribution by about 20 percent over the next year.

Richins is the first to say this is a great thing for the 40 million Americans dealing with food insecurity. But that doesn’t mean it’ll be easy. The additional fresh food will require money for trucks, drivers, fuel and storage. UFB is now seeking $350,000 in new donations (a link to donate is here).

Feeding America, a national network of food banks, estimates distribution will cost food banks nationwide about $300 million. It’s trying to locate more funding so that approximately 200 of its member food banks don’t have to resort to GoFundMe campaigns.

“A certain amount of the cost our food banks are willing and able to absorb," said Carrie Calvert, managing director of government relations at Feeding America. "But with this amount of food that’s coming, it’s far more than they had anticipated. And they’re going to need help.”

"When this additional food goes away, we don’t want to tell the additional families that we’ve been serving, ‘sorry the trade mitigation food went away, we can’t help you now.’"
—Carrie Calvert, Feeding America

Greg Ibach, undersecretary for marketing and regulatory programs at the USDA, said there’s some department money available, but he called this an opportunity for “public-private partnerships.”

“We don’t anticipate asking Congress for any funds to be able to accomplish our goals,” he said.

As for how long this might last, Ibach is confident it will be a one-time deal and the Trump administration will work out these trade issues.

He hopes that, “by this time next year, when 2019 crop is being harvested, that we won’t need to talk about any additional assistance program.”

Even if the program lasts just one harvest, there is a long-term effect for food banks, Calvert said.

“We’ll be able to distribute more food to people in need through this program and that is a positive thing,” she emphasized. “However, when this additional food goes away, we don’t want to tell the additional families that we’ve been serving, ‘sorry the trade mitigation food went away, we can’t help you now.’”

Food banks and Feeding America will “need to actively look for ways to replace the food so that we can continue serving families in need,” Calvert said.

Richins acknowledged how worried he is about all the additional work.

“The first month or two might be a little rocky, but I think we’re up to the challenge,” he said. “I think we’re gonna be able to get this out.”

EDITOR'S NOTE: This story has been modified to include the food UFB has received from an annual harvest donation program from the USDA.