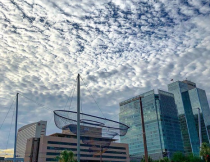 Record heat this summer did not scare away visitors to the state. In fact, summer tourism hit a 10-year high.

Between the three summer months of July and September, an estimated 10 million people visited Arizona. That’s almost a quarter of all visitors in 2017.

"We actually drove some hotel bookings to Tempe and to Prescott and to Yuma. We got people, got a few hotel bookings down in Yuma, which is not thought of as a summer destination," said Scott Dunn, of the Arizona Office of Tourism.

This year, the Arizona Office of Tourism launched a strategic summer campaign to increase visitation revenue for the state. Phoenix, Tucson and Scottsdale saw the largest share of bookings for the state, with Yuma and Prescott, making the top-10 list. Tourism remains the top economic driver for Arizona, generating $23 billion in revenue.

A summer tourism campaign from June through mid-August drove $1.5 million in just hotel revenue to the state.