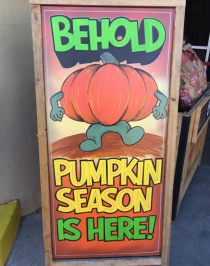 Saturday is officially the first day of fall and, for some people, that means one thing: pumpkins!

But Saturday it’s supposed to hit 102 degrees. So why the obsession with the fall flavor when it doesn’t feel like fall outside?

For Tina Downey, a native of Philadelphia, a pumpkin spice latte is autumn in a cup.

“To me, like comfy clothes, sweatpants, watching football on Sundays, color changing leaves. It just makes me in an east coast mind frame,” she said.

And for Sarah Thomas, it’s about creating a fall that doesn’t quite exist here yet.

“Because the weather doesn’t make me feel like fall is here and so I have to do other things to make it feel like fall,” she said.

The fixation doesn’t stop at coffee though. Thomas said she bought everything pumpkin that she could find at the grocery store.

John Stanton is a professor of food marketing at St. Joseph’s University. He says that while for some people it’s about trying to summon a crisp fall day, only being able to get it a few weeks a year is one reason for the pumpkin spice craze.

“You know, they’re not going to get it any other time. It’s a limited edition, it’s scarce. It’s all these things throughout the year, but guess what? You can buy it now,” he said.