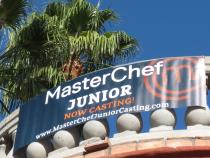 MasterChef Junior, the pint-sized cooking competition judged by Chef Gordon Ramsay, is into its second season with eyes, and taste buds, on finding the best kid cooks for a third.

Last weekend there was a casting call to see who could broil, grill, sautee and chop the competition and be the next to hear, "welcome to MasterChef Junior!"

Dozens of ambitious kids, all between 8 and 13 years old, showed up to audition for MasterChef Junior. These kids named ratatouille, gluten-free, tomato-free, milk-free pasta, Mexican fajitas, macaroni and chees and deconstructed lemon cheesecake as their signature dishes.

Most of the young chefs I talked to, like Corey Gifft, got their start cooking with their families.

"Well what inspired me to cook is my sister. She took the guts out of the Thanksgiving turkey and that really like inspired me to do it cause I was too much of a chicken," Gifft said.

But to go from home cook to MasterChef you have to take your cooking to the next level and try new things, which can be intimidating for most of us, but not for kids like Nicco Shaw.

"I take what my mom and my grandma taught me and I just put little twists in it," Shaw said.

Danielle Addicott is also all about tweaking recipes she already knows.

"I sort of search them and see, oh maybe I can mix this recipe with this recipe to make a whole new thing," Addicott said.

So just what does it take to make it past the screening and into the competition?

"We don’t necessarily need like, someone with crazy technical skills already, but we just need someone that loves cooking, has a passion for it and has potential to keep learning," casting producer Amy Lee said.

As for the actual audition process and the way the judging works, it’s all kept pretty secret. But a quick look at the judges’ score sheets showed categories for chopping skill, egg technique, confidence and knowledge of food. I decided to ask for some advice from the pros.

"Usually if you’re cutting, tuck your fingers in, and your thumb behind so you don’t cut yourself. And crack eggs on a hard surface, not on a bowl or anything," Gifft said.

"First learn off the recipe book. But otherwise, mainly believe in yourself," said Rylee Wieters.

Advice even Gordon Ramsay would approve of.