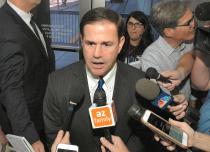 Arizona Gov. Doug Ducey says he’s open to ideas about how to reform the way charter schools operate. This comes after Republican lawmaker Eddie Farnsworth cashed in on the sale of his for-profit charter school and its four campuses.

Ducey, however, says he has no specific suggestions, despite being aware of reports that some owners have managed to get rich with the money they get from state taxpayers to run charter schools.

But others, like Republican Sen. Kate Brophy McGee, are looking at ways to mandate better oversight of those individuals.

“I am uncomfortable with the nepotism that exists on charter boards. I don't feel that those boards are necessarily independent. Are these truly independent boards that hold these operators accountable? Or are they a collection of friends and family members who just vote for stuff?” said McGee.

McGee told Capitol Media Services that she also wants lawmakers to revamp what constitutes a conflict of interest, saying the current rules permit too many legislators to vote on issues that affect their own finances.

"What we have experienced are situations where people have written checks, of where money is being spent on things like Waste Management golf tickets, where purchases were made in Hawaii for school supplies supposedly, at a Staples. And the funds get kind of commingled," said Anderson.

Ducey remains a staunch supporter of charter schools. He’s even pushed legislation allowing the state to guarantee loans taken out by charter owners.

Documents obtained by Capitol Media Services show that to date the state has underwritten $142 million of those loans.