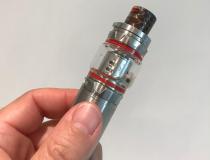 Vaping among teenagers in our country is an epidemic. That’s what the nation’s top health officials at the Food and Drug Administration announced last week as it ordered e-cigarette manufacturers to stop advertising their products to teens.

It marks a shift in the agency’s tone toward e-cigarettes. Previously, FDA Commissioner Scott Gottlieb had said e-cigarettes and vape pens could be a tool to help adult smokers to quit smoking cigarettes. But, last week, his message was very different.

The newest wave of e-cigarettes among young people is called Juuling. Juul exploded onto the market recently, and now accounts for 70 percent of U.S. sales, according to the Associated Press.

Juuls are smaller to most e-cigarettes while being a lot more sleek.  A Juul looks more like a USB drive than anything else, and one Juul cartridge contains as much nicotine as an entire pack of cigarettes. If you talk to a high schooler today, they’ll tell you they’re everywhere.

Brach Drew is the junior class president at Marcos de Niza High School in Tempe, and when The Show talked to him, he said the problem is that Juuling is easy to hide.

Drew and the rest of the student council at his school is part of a campaign that Tempe Union High School District launched to curb vaping and Juuling by high school students called “Vanish the Vape.” They’re hoping to educate students and parents about the consequences of doing this, and just how addictive it can be.

The Show went out to Marcos de Niza High to find out more about it, and spoke with Eric Lauer, the health and wellness coach there.