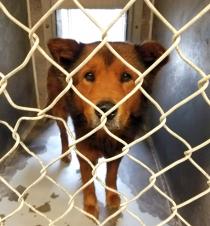 Rachel Chan
A dog in a kennel at MCACC East Valley Animal Care prior to being adopted in 2016.

Maricopa County Animal Care and Control is pursuing plans to build a new animal shelter to replace an aging facility at Rio Salado Parkway and Loop 101.

Spokesman Jose Santiago said the department was looking into consolidating animal shelters across the Valley but have decided to change course.

"When we did a little more checking, the idea of having just one location really wasn't going to work the best because we deal with anywhere from 35,000 to 40,000 animals a year," he said. "There was some fear of possible overcrowding. There was a fear of just not having enough space."

Animal Care and Control says the current East Valley shelter is aging and does not meet the standards necessary to properly house and care for animals.

"It was never built to be a shelter per se," Santiago said. "It was specifically built more than 30 years ago with the intention of being an intake facility specifically for rabies quarantine."

He said the kennels are much smaller than they need to be, and the facility struggles with its air conditioning system.

Santiago said renovating the existing structure was deemed too costly, so they are now suggesting the construction of a new facility.

“We’re going to be working with an architectural firm to develop some type of plans. The board of supervisors then have to vote on those plans and they have to approve a budget.”

Santiago said they are looking at building on a county-owned campus at Mesa Drive and Baseline Road, but construction is several years off. In the meantime, the current East Valley shelter will remain open.