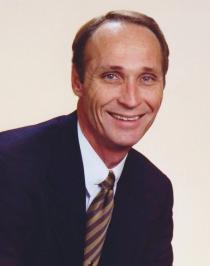 BRODIE: So, did you try to collect signatures to qualify for the ballot to run for governor again this term?

HESS: Well I, actually yes. But I did not turn them in simply because I only had 87 over the required amount. And I thought that some might be disqualified even though we had verified about 80 percent of them because we're always on the lookout. Yhese guys are always playing games trying to disqualify Libertarians. I mean, the Republican administration, of course. And so we're a little disturbed. We put probably close to 90 thousand dollars into a write-in effort and according to the canvass they got back, I think roughly 5,000 Libertarian's ballots which were blank. And they're saying half of them were left blank. Well, Libertarians don't do that. We're going to write something in. And so we want to do an audit of the rejected ballots. We don't believe they were counted correctly.

BRODIE: So, we've talked about how you have to collect many more signatures now than you used to, just to qualify for the ballot much less collecting votes on Election Day and during early voting and during the debate on this bill back in 2015 some Republicans were pretty candid about the fact that they believe that Libertarian candidates were siphoning off votes from GOP candidates. Do you think that that actually happens? Do Libertarian candidates take away votes from Republicans?

HESS: Absolutely not. Because if we were to take away votes from anybody, they would have to be owned by that other person or other party. That is such a childish and ridiculous assumption that they always jump on and they think that it's going to work in their favor. I think it's going to work against the Republicans because what many people don't realize is that in 2013 they put through 2305. I think it was a Senate bill and we got that, we put together the largest coalition in Arizona history and we rejected it. We were going to put them on the ballot. It was after like 35 tries to send a citizens referendum to the ballot. This was the first one successful since Evan Mecham. And Eddie Farnsworth for instance, said they repealed it of course, they repealed that whole junk legislation. And Eddie Farnsworth had said, "Well, we listened to the people and it shouldn't be there." What they really didn't want was their integrity being put on the ballot and that was what was happening and why they repealed it. They said they listened to the voters but then they came back and put back every piece of it, one piece at a time. So they really weren't listening. They were lying.

BRODIE: Barry, Libertarians obviously have not had a whole ton of electoral success in Arizona. I'm wondering from your perspective what do voters miss or maybe lose out on by not having Libertarians or Green Party members or other third party candidates on the ballot?

HESS: They miss out on other views, other point of views I suppose, or perspectives in the sense that we each bring our own alternative answers to problems and challenges that face us as a state. And I think that by lessening that and just limiting it to the Republican-Democrat girls — I mean they're twins, for crying out loud. There, it's a game to play ping-pong with the voters, get you mad at the Republicans so you vote Democrat and vice versa. And we were talking about, well, let's just organize Libertarians to all vote Democrat, but that didn't go over very big. Because we are anti-socialists. And so I think that what we might be looking at is ... a NOTA — none of the above campaign — to try to get enough Arizonans to write in NOTA on every major race that there is. We think that would be a good message to send to these guys who think that they can control our vote by lessening our choices. They're pulling a Hillary on us, for crying out loud.

BRODIE: All right, we'll have to leave it there. That's Barry Hess Libertarian candidate for governor in many elections. Barry, thanks for your time this morning we appreciate it.