Jon Kyl Sworn In As Arizona Senator, Steps Back Into The Spotlight 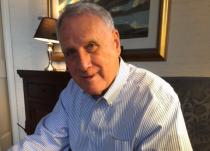 On Tuesday, Gov. Doug Ducey announced his replacement for the Senate seat of the late John McCain. By selecting former Sen. Jon Kyl, Ducey made a calculated decision to draw on institutional knowledge.

When Jon Kyl left the Senate six years ago, he walked away holding the title of Senate Minority Whip. And while Kyl's name might not be as household as McCain's, Time Magazine In 2010 named him one of the "100 Most Influential People of the Year" for his work behind the scenes.

It's this political deftness that was tapped to shepherd Judge Brett Kavanaugh through the U.S. Supreme Court nomination process and to do the same for Attorney General Jeff Sessions.

Now Kyl steps back into the spotlight with a majority Republican Senate but a different president in the White House. What does he bring to the table this time?

For that, The Show turned to Zach Cohen, Senate correspondent for the National Journal.