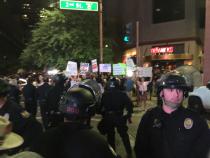 It’s been more than a year since President Donald Trump held a rally in Phoenix and police used tear gas and non-lethal projectiles on protesters afterward. Ever since, the ACLU of Arizona has been in a battle for the records from that night — and sued for them.

Police said a small group of instigators compelled officers to take action. But the Arizona ACLU says there was no warning to the hundreds of protesters who were peacefully exercising their First Amendment rights.

The civil rights group filed a class-action lawsuit Tuesday against the city.

Brody says the lawsuit is seeking a policy change from the Phoenix police, along with damages for the protesters who were affected.

Police have said repeatedly that a small group of protesters were causing enough trouble to justify the response.

“The people of the city of Phoenix should not have to be afraid of being attacked by the police when they get together to express themselves on important political issues,” Brody said.

No one was severely injured, and the City Council voted not to have an outside investigator review police action.