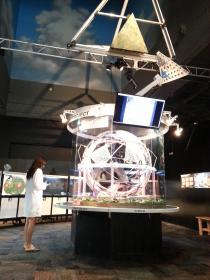 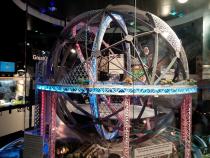 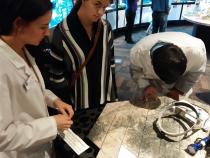 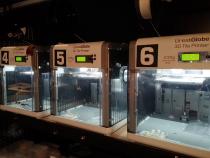 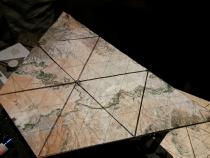 (Photo by Andrew Bernier - KJZZ)
A portion of Arizona tiles pieced together.

A small team of professionals and students is taking on an ambitious project. They are constructing a large-scale model of the Earth in a remote part of Arizona. Local and international support is helping to make it a reality.

At the Arizona Science Center, a model Earth is revolving on an axis, complete with miniature monorails, viewing cars and a pedestrian walkway. As project director Bryan Beaulieu notes, the angle axis was intentional, for both science and visitors.

“A model of Earth that’s accurate has to point to the North Star, and that’s at 33 degrees," Beaulieu said. "So that is why it’s at the weird angle. And it allows us to build an observation ring around the globe so that 90 percent of the populated part of the planet can see where they are when you spin the globe at that angle.”

The Great Globe Project is a steel sphere standing 42 stories high, designed to be made of ten and a half million triangular tiles, each side about three inches. The tiles are individually 3-D printed, giving height to anything on Earth standing over 30 feet tall.

“It has to be exactly precise so none of the triangles are touching on the print bed when you’re printing.”

Two interns, Guillermo and Hailey, and a row of 3-D printers are tirelessly at work behind the globe.

“With all the topography that we’re looking at we also have a lot of engineering with this,” Hailey said.

With engineering comes the need for funding and the hopes of the project lie in the hands of students around the world.

“We want the students to feel like that this is literally their project," Beaulieu said. "So, we’re saying, 'you gotta find nine things in this little part of the planet that you’re looking at. And find five sponsors at a dollar each to sponsor your research.'"

This project isn’t the first of it’s kind though. In the early 1990s Beaulieu did the same thing with a number of students, building a one-to-one-million scale Earth also made of tiles, which stood just over four stories tall. It was built and disassembled multiple times before being destroyed in 1995 by a tornado in Minnesota.

For the 2014 version here in Arizona, even the interns have to put their own education to the task.

The planned site for the structure is in a canyon on the Tohono O'odham nation not too far south of Casa Grande. Beaulieu says there the structure would be relatively free of rain, dust storms and seismic events.

Arizona alone will take up about 6,000 tiles, half of 1 percent of the entire globe. Workers hope the project will be built by 2020.