Entering the palatial church, John McCain’s mourners were a stream of dark suits and dresses, but also Hawaiian shirts and traditional Navajo skirts.

It was everyone, which was fitting for a service often focusing on our shared humanity.

There were many elements you could have pictured beforehand, like "Amazing Grace" sung by a Brophy High School choir and Bible verses read by McCain’s children. 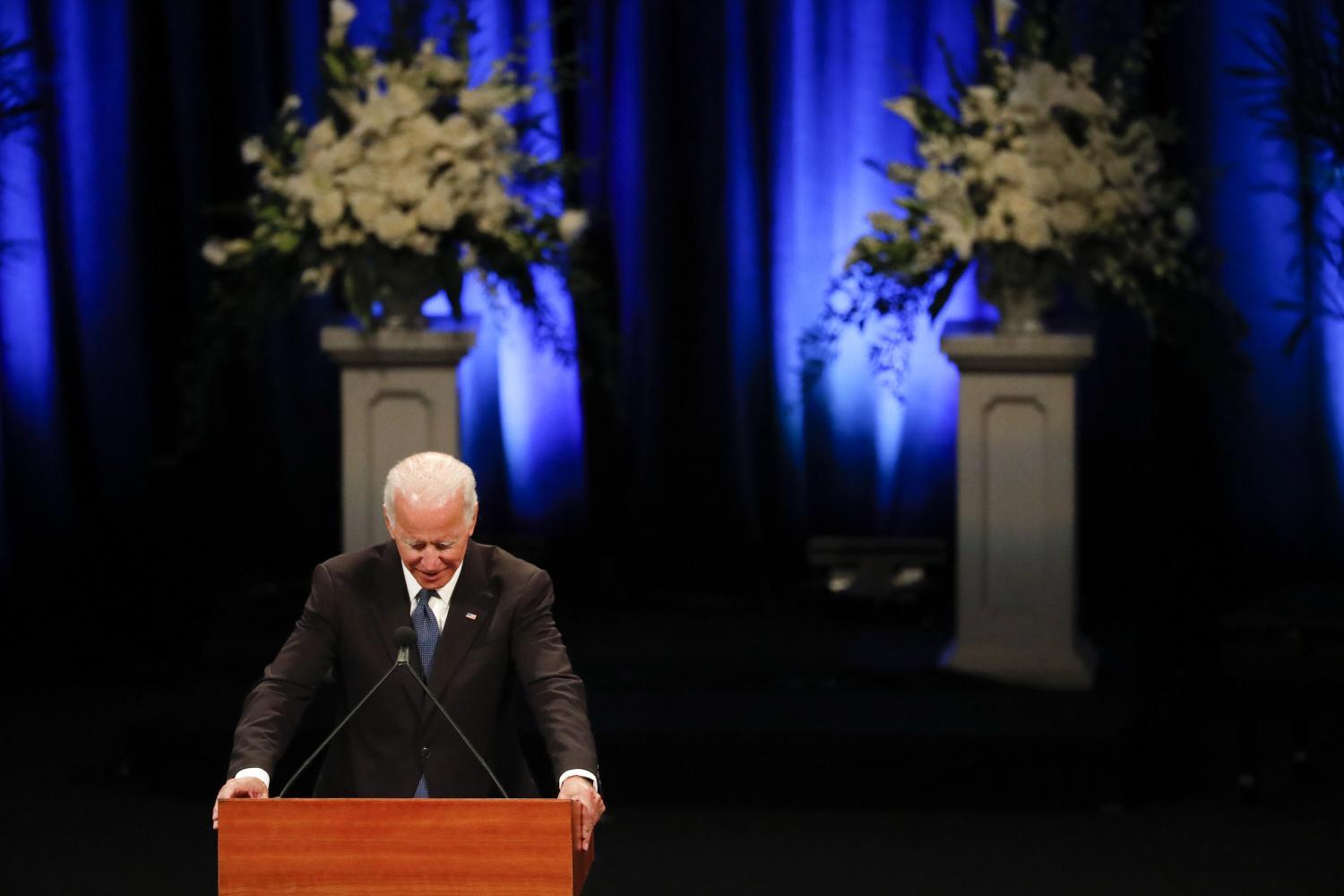 But there were also surprises, like the many punch lines. Former Arizona Attorney General Grant Woods described his first time in a car with McCain.

“It was at the same time just really a lot of fun also quite terrifying because of his ridiculously bad driving,” he said, as the crowd laughed.

That was when Woods was first hired as McCain’s chief of staff.

“And I just say that two hours kind of epitomized the next 35 years for me with John McCain,” he said. “It was at once a little bit harrowing, a little wild, a little crazy, but a lot of fun and the greatest honor of my life.”

Longtime friends took to the podium on the simple stage, underneath screens glowing with a red-rock Sedona sunset. Arizona Cardinal Larry Fitzgerald joked about the differences between him and the six-term senator.

“He ran for president, I run out of bounds,” he said, to chuckles.

While some people may find their friendship out of the ordinary, “it was the perfect example of what made him an iconic figure of American politics and service to fellow man,” Fitzgerald said. “He celebrated differences. He embraced humanity, championed what was true and saw people for who they were.”

McCain understood everyone, regardless of skin color, said Tommy Espinoza, who runs a nonprofit focused on helping Latinos.

“What he knew is that we all make America great.”
— Tommy Espinoza

“What he knew is that we all make America great,” he said.

Espinoza is a Democrat, but co-chaired McCain’s Senate campaign at his request.

A look back to a more bipartisan past was a big theme of the service, especially when Joe Biden stepped up to the mic.

“I always thought of John as a brother,” he said, before getting a laugh  from audience. “We had a hell of a lot of family fights.”

The former vice president said he’d been thinking a lot about why McCain’s death hit Americans so hard.

“I think it’s because they knew John believed so deeply and so passionately in the soul of America,” he said, “that he made it easier for them to have confidence and faith in America.”

Biden spoke of losing his wife and baby daughter to a car crash decades ago and his adult son to cancer a few years back.

Speaking directly to McCain’s family, he said he knows this loss is all-consuming.

“For all of you right now,” he said. “It’s like being sucked into a black hole inside your chest.”

But Biden also offered hope. He said someday you’ll know you can make it through.

When you think of this man you’ve lost, “and a smile comes to your lip before a tear to your eye, that’s when you know,” he said. “And I promise you. I give you my word, I promise you, this I know. That day will come.”

Before the ceremony ended, the choir sang one final song, “Arizona,” for one of the state’s most well-known adopted sons. McCain’s body is now lying in state in Washington, DC. He’ll be buried in Annapolis on Sunday. 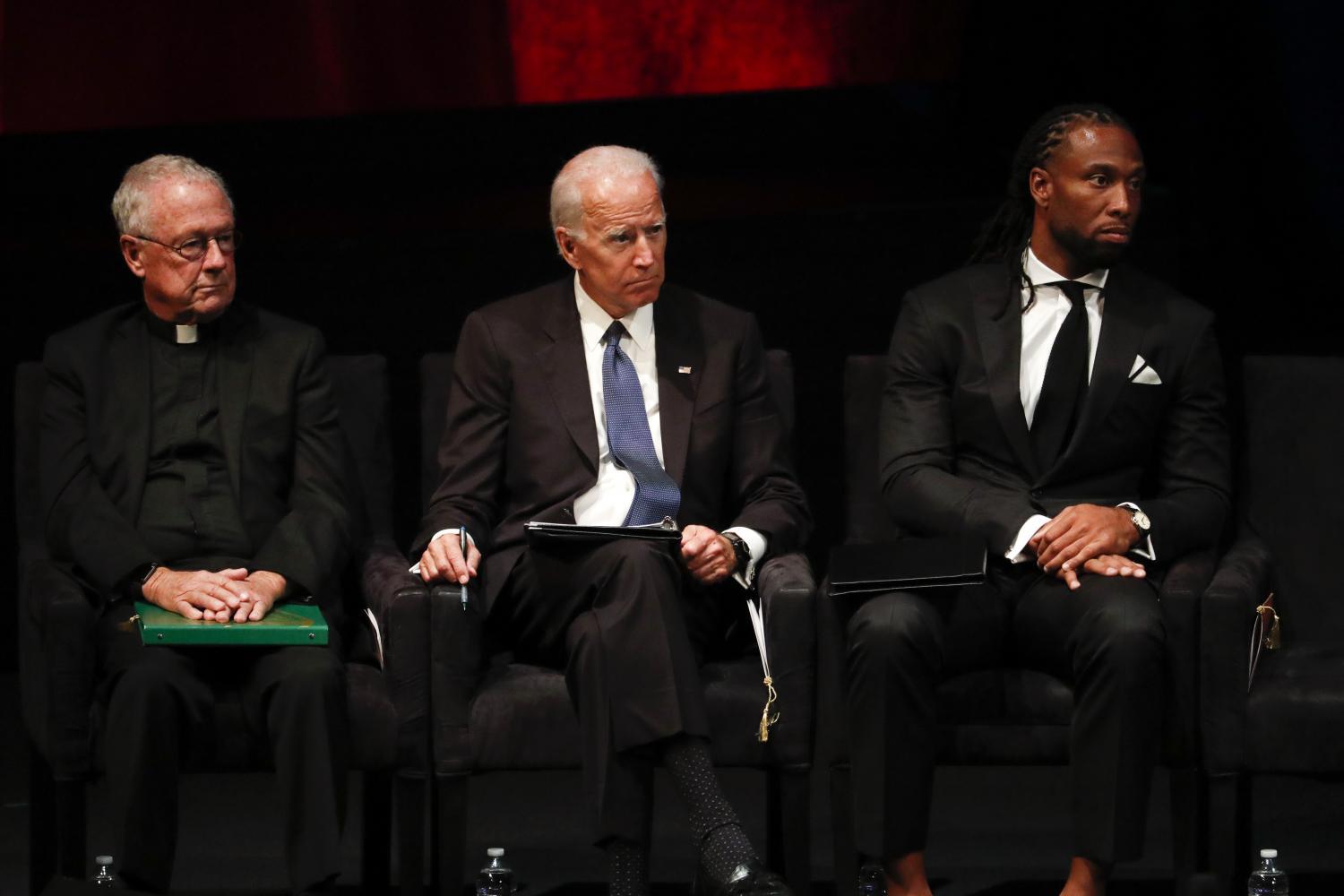