The polls are closed for Arizona's primary election, but some people are still waiting to cast votes.

Since they were in line before the polls closed at 7 p.m. Tuesday, they will be allowed to vote.

Most voters cast their ballots early.

However, some voters who waited to vote until Tuesday morning faced problems in the Phoenix metro area.

Several locations opened hours behind schedule because voting machines had not been set up on time.

The office of Maricopa County Recorder Adrian Fontes says 62 polling places didn't open on time, but all were operating by 11:30 a.m.

The county has about 750 locations.

The polls are now closed for Arizona's primary election.

Most voters cast their ballots early but polling places across the state opened at 6 a.m. Thursday and closed at 7 p.m.

However, some voters faced problems at Phoenix-area polling places.

Several locations opened hours behind schedule because voting machines had not been set up on time.

The office of Maricopa County Recorder Adrian Fontes says 62 polling places didn't open on time, but all were operating by 11:30 a.m.

The county has about 750 locations.

The head of elections in Arizona called on the county to seek a court order to keep the polls open later, but leaders opted against the move.

No voting machine problems were reported in other parts of the state.

Leaders in Arizona's most populous county won't try to extend voting hours during the primary election after 62 Phoenix-area polling places opened late because of issues setting up equipment.

Maricopa County Board of Supervisors Chairman Steve Chucri said in a statement that the board wasn't notified Monday when the county's head of elections learned of the problems setting up voting machines.

County recorder Adrian Fontes says he found out Monday afternoon that a contractor didn't send enough technicians to get the machines going on time.

The Arizona secretary of state called on the county to seek a court order to keep the polls open later.

Chucri says asking a court for an extension would confuse voters, delay returns and have unintended consequences. He says voters should get in line by 7 p.m. and that their votes will still be counted.

Maricopa County Recorder Adrian Fontes said on his Facebook page that all of the locations were functional as of 11:30 a.m. Tuesday.

Fontes said earlier that a contractor hired to set up voting machines didn't send enough technicians and that his staff worked until late Monday to try to get as many going as possible.

The delay resulted in over 100 complaints from voters who couldn't cast their ballot at their assigned locations.

It came two years after people in the Phoenix area waited hours to vote after the former county recorder drastically reduced the number of polling locations.

That official was ousted from office over the controversy.

UPDATE: As of 6:00 a.m., the set up in 62 polling places had not been completed. All sites were functional by 11:30 a.m. We will be providing additional information as soon as it is available.

All Phoenix-area polling locations are operational after several closed during Arizona's primary election because of a problem getting machines set up on time.

Sophia Solis, a spokeswoman for the Maricopa County Recorder's Office, said all locations were operational as of about 11 a.m. Tuesday.

It's unclear exactly how many locations failed to open on time, but elections officials said earlier that four had been shut down Tuesday morning and they had expected about 250 places to have issues.

There are about 750 polling locations in the state's most populous county, which includes metro Phoenix.

The Arizona Secretary of State's Office says no issues have been reported elsewhere in Arizona.

County Recorder Adrian Fontes said a contractor hired to set up the machines didn't send enough people to do the work Monday. 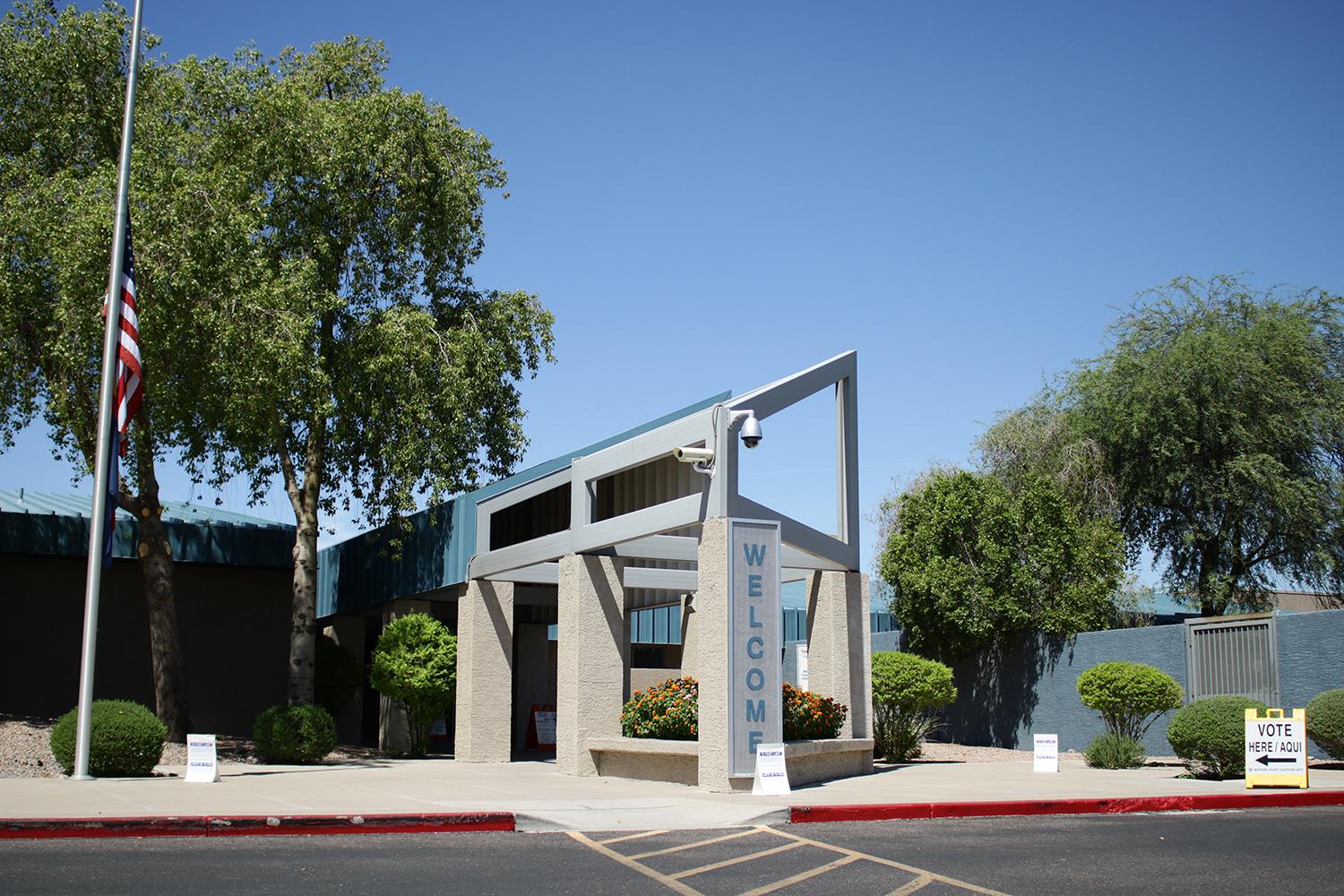 Election inspector Shawn Kelly told KJZZ the polling location at the Tempe Union High School District Office had trouble getting the computers working as polls opened at 6 a.m. with 25 people in line. Several voters were sent to another location at Tempe Public Library.

Kelly said he received three hours of training from Maricopa County last week on the all-new touchscreen voting systems. He did not have access to the IT staff who set up the computers, leaving election officials to rely on the manual to troubleshoot.

"Within 15, 20 minutes we kind of worked it all out, but it was a little frustrating in the beginning and I probably could have used a little more training," Kelly said. 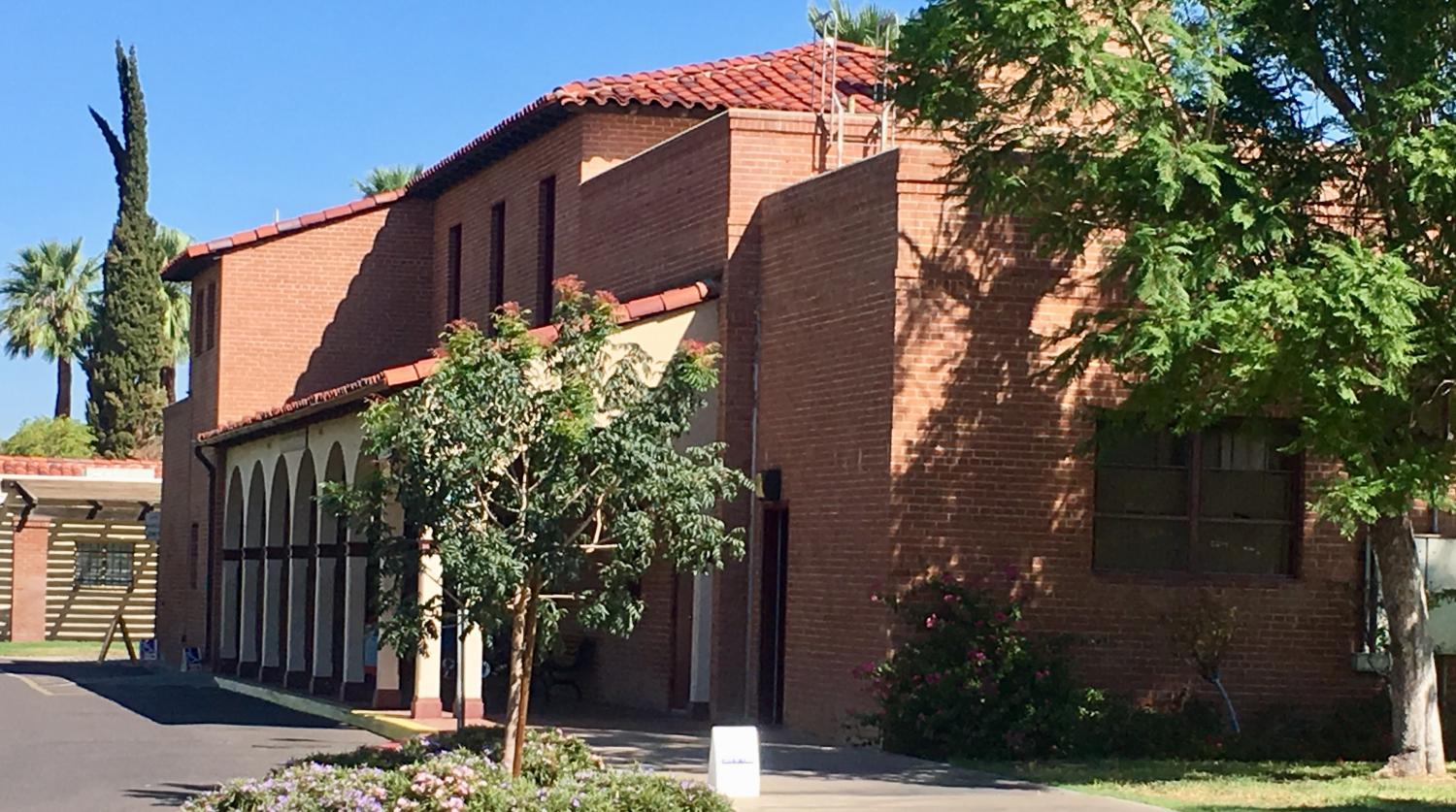 Christina Estes/KJZZ
Voters were turned away from the Encanto Golf Clubhouse polling site on Aug. 28, 2018.

Voters across the Valley experienced frustrations as they tried to vote this morning. Scott Winebrenner was turned away at his polling site at 15th Avenue and Encanto Boulevard in Phoenix.

“I work right up the street so now I’ve got to travel somewhere farther, take more time out of my workday, which I’m glad to do because I want to vote. But it’s still kind of disappointing that I show up to a polling place and it’s not open," said Winebrenner.

Poll workers directed him to Burton Barr Central Library where he would get a ballot marked as "provisional" but reportedly would count as a regular ballot. Usually if you cast a provisional ballot outside your correct precinct, your vote is not counted.

“They stopped me at the door and they just said you know, ‘Unfortunately, if you don’t have your early ballot just to drop off in person we’re not going to be able to get you here but you can go to Burton Barr Library," said Safia Sampson, who was turned away at polling location at Encanto Golf Clubhouse in Phoenix.

Arizona’s Secretary of State says the state is on track to have 1.1 million early returned Tuesday which would set a new record. But showing up in person to cast their ballots is important to many people.

“I like the ritual. I think there’s something to actually going and casting your vote that makes you feel like you’re participating in a process that everyone should take the time to do. It’s your country, it’s your state, it’s your city," said Phoenix voter Susan Federspiel.

“We’ve always voted, we tell our kids it’s our civic duty. There’s a lot of division in our country and we feel like sitting and griping at the things going on isn’t going to change things. This is where you change it. It’s at the ballot," said Russell Anderson. He voted with no problems in his first Arizona election at Church of the Beatitudes at 7th and Glendale avenues in Phoenix.

“My wife mails her ballot in, but there’s something about going in, and standing there, placing your ballot in the box, getting your sticker. It’s something I did with my parents when I was young. It means something," said Brent Kleinman, a Phoenix voter.

County Recorder Adrian Fontes said as of about 10:30 a.m. on Tuesday, only a couple locations were still not up and running. He told KJZZ's The Show it wasn’t an electronic problem, but a manpower one.

"Really it’s a question of logistics. We had a contractor who was supposed to get out and help us set up 460+ sites yesterday and they didn’t deploy sufficient resources. And once we got around trying to help resolve that problem, we ended up working through the evening and into this morning," he said.

Fontes stressed there are 40 vote centers anyone can use if a neighborhood polling place isn’t working. Polls are open until 7 p.m. If you’re in line by 7 p.m., you can vote.

“This is not a hiccup. This is a serious concern where lot of voters all over Maricopa County are not able to get voting. I think that's a problem and we’re going to solve this problem.”

Fontes said the problems are occurring at individual polling places.

Fontes went on to say that the issues with polls opening on time were not necessarily unusual.

“I’ll tell you this, there's never been an election in Maricopa County where we were open 100 percent right on time.”

KJZZ is hearing reports from voters around the Valley that precincts are having trouble processing ballots under the newly installed systems. Maricopa County Recorder Adrian Fontes is expected to give us an update Tuesday morning.

Meanwhile, some 800,000 Arizonans avoided voting glitches by sending in their primary ballots by mail.

The mail-in deadline passed last week, but Secretary of State Michele Reagan says voters can take those mail-in ballots to any polling site and drop it in a secured ballot box until seven o’clock tonight.

Voters wondering where their precinct poll is located can go to the statewide website, arizona.vote, to see a map and directions.

While registered Republican and Democrat voters are automatically cleared to vote in their party’s primaries, Reagan says registered Independents who never received an early ballot can still vote.

“You are eligible to vote. You can vote in state primaries. When you go to the polls you need to tell them whether y ou would like to poll a Republican ballot or a Democrat ballot, or a Libertarian ballot. You have your choice.”

Reagan says unless the numbers are extremely close, the first batch of Tuesday's returns will solidify what races win today’s primary.

Local media outlets reported that equipment and other setup problems at multiple polling places prevented or delayed some voters from casting ballots Tuesday morning. Some reports indicated that the problems were being resolved.

The extent of the problems wasn't clear and a spokeswoman for Maricopa County Recorder Adrian Fontes did not immediately respond to multiple phone and email inquiries from The Associated Press.

Media outlets reported that the problems occurred in cities such as Phoenix, Mesa, Chandler and Scottsdale. 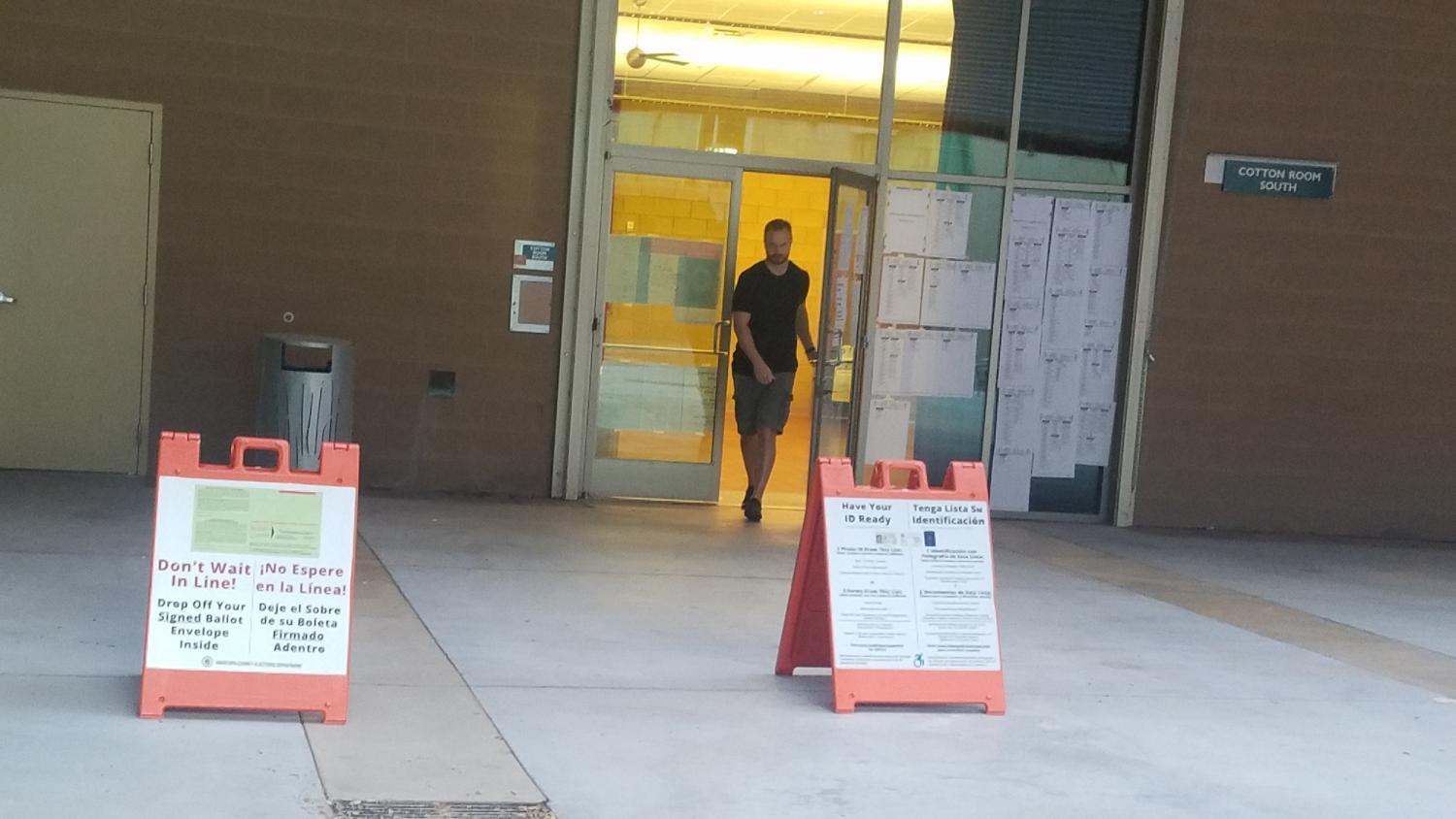 A polling place at Tumbleweed Recreation Center in south Chandler opened about 10 minutes later thank schedule. Precinct workers blamed the delay and their confusion on a new electronic system.

After showing their driver’s licenses or other identifications, voters filled out their ballots with black pens and then put them into tabulation machines. Several of those ballots couldn’t be scanned into the machines and precinct workers put the ballots into a secure compartment below.

Some voters complained the voting process was slower than they expected, but most were done and received an “I Voted Early” stickers within 30 minutes. 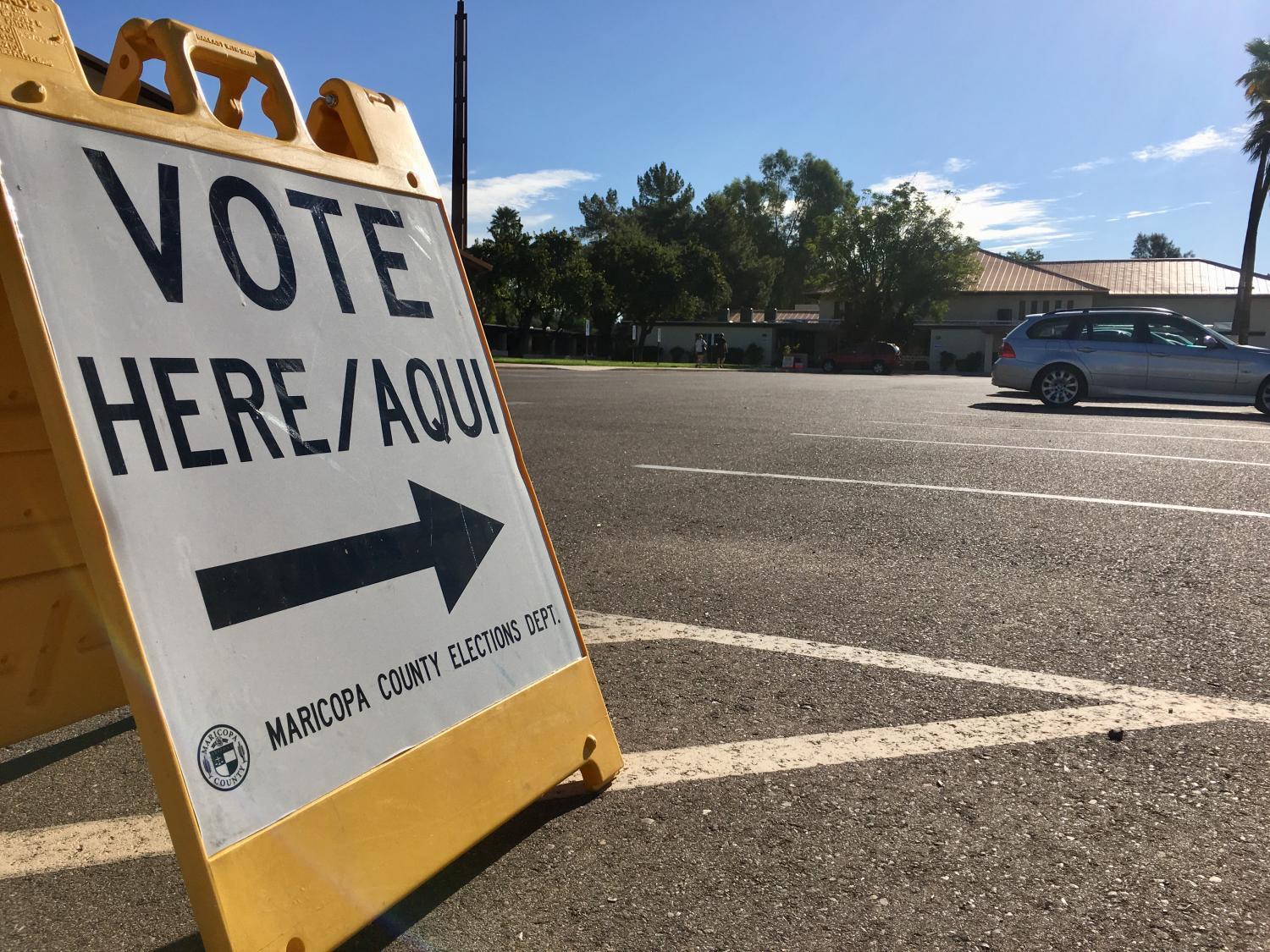 Christina Estes/KJZZ
A poling location near 7th and Glendale avenues on Aug. 28, 2018.

Polls are open around Arizona with the death of the state’s six-term Sen. John McCain shadowing the GOP contest to replace Sen. Jeff Flake.

Most primary election voters cast their ballots early but polling places across the state opened at 6 a.m. and are scheduled to remain open until 7 p.m.

Meanwhile, on the Democratic side, Congresswoman Kyrsten Sinema is the heavy favorite in a contest that also includes activist and attorney Deedra Abboud.

There are also contested primaries for governor, secretary of state and superintendent of public instruction.