Research into valley fever has been ongoing for decades, and significant advances have been made. But the fungal disease is primarily found in Arizona and the Central Valley of California — including Bakersfield, California.

That limited coverage area may be the reason there hasn’t been enthusiastic support among lawmakers to increase funding that could ultimately lead to a vaccine.

That may be changing.

House Majority Leader Kevin McCarthy represents the area of California where frequent cases of valley fever are reported, and he has introduced H.R. 6562 — or the FORWARD Act — to bring a total of $95 million in research funding for valley fever and other fungal diseases.

Dr. John Galgiani, director of the Valley Fever Center for Excellence, joined The Show to talk about the legislation and what could be next. 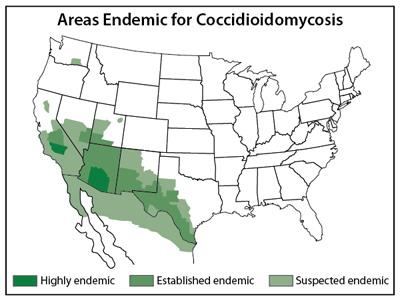 Center For Disease Control and Prevention
Known and suspected areas where the fungus that causes valley fever lives in the United States.