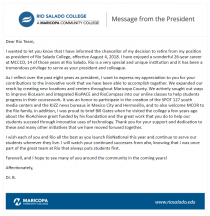 The president of Rio Salado College has retired the same day an investigation regarding sexual harassment under his leadership was made public.

In the past year, two high-level administrators have resigned following sexual harassment investigations, and one other has retired. A separate investigation into leadership at Rio Salado found a deep mistrust of the past Rio Salado human resources dean. It goes on to say that the complaint process is “confusing for employees” and that many don’t know who they can go to about sexual harassment concerns.

Regarding Bustamante, the report found that "the allegation that the president had prior knowledge as early as March 2016 and failed to take effective action with regard to Terry is substantiated."

“Reform to policy and procedures was necessary for us to [get a] better sense of accountability, an easier and more transparent process for our employees to make sure they know where they need to go if they have an issue they want to bring to our attention,” Hasson said.

The Maricopa County Community College District hired Jean Wilcox, an attorney in Prescott, to conduct an independent investigation into the handling of sexual harassment cases in the last three years at the district's Rio Salado College.

The report shows only two formal complaints in that time logged to the district's Equal Employment Opportunity manager, Deric Hall. Those were against former Auxiliary Services Manager Alex Lopez and former Vice President of Student Affairs LeRodrick Terry, who have both been investigated and resigned.

Jim Paluzzi has served since 2009 as Rio Salado's vice president of public service, and his duties including overseeing KJZZ. An anonymous letter sent to several leaders in the district-level human resources department led to an investigation into Paluzzi and Mark Moran, one of KJZZ's associate general managers. Both were placed on administrative leave, and after an investigation by Wilcox concluded that complaints against Paluzzi were substantiated, he announced his retirement, effective Aug. 11. Moran remains on leave, pending the results of an investigation into allegations against him.

Wilcox's investigation into the district details other reports as well. One concerns an informal complaint from September 2017 by a part-time, female student employee against Chester Brown, a maintenance and operations supervisor at the college. His behavior was ultimately considered inappropriate and he was moved to a different location within Rio Salado. This and another complaint from 2015 were not included in Hall’s list of complaints.

The Lopez complaint includes six separate allegations of sexual harassment, from around 2009 through 2017. They include allegations that Lopez commented consistently about women’s bodies in a sexual and derogatory way. Several interviewees said they didn’t know whom to report the problems to, and that they did not go to former Human Resources manager Sharon Koberna because they didn’t think it would help them. Several told their supervisors but said they did not see action by the district until Hall investigated.

When Hall investigated Lopez, he did not see the actions as part of a continuing pattern of behavior, according to Wilcox’s report. Instead of discipline, he suggested sexual harassment training for Lopez.

The report says administration response had a pattern of inaction. Koberna, former dean of human resources,  “did not seem to take sexual harassment complaints seriously.” Koberna’s response to several employees who said they reported incidents involving Terry was to do nothing, or, as one person said, that his actions were “a cultural thing.”

According to the report, Bustamante said he had no knowledge of allegations against anyone until he first heard about the Terry case, which he said was in March 2017. But according to the report, two administrators, including one of the college's deans, said they met with Bustamante in 2016 to raise concerns about Terry. When questioned by Wilcox about the dean's claim of a 2016 meeting about Terry's behavior, Bustamante said: “I do not recall the conversation that (the dean) said she had with me in 2016 that you refer to. I’m sure I would have remembered such a conversation had it taken place given that it related to a serious allegation against one of my Vice Presidents but I absolutely have no memory of such a conversation.”

The report also includes responses from managers within KJZZ about incidents involving Paluzzi. To avoid a conflict of interest, KJZZ contracted with a freelance reporter from Los Angeles, Jeff Tyler, to report on the outside investigation into Paluzzi.

As the report details, “Bustamante acknowledges that, as president of the college, he bears responsibility for helping people feel like they can report these (sexual harassment) issues.” Bustamante also said he did not know, but would have liked to have known, about the alleged inaction within the human resources department.

Finally, the report says the common thread between all the allegations and investigations into harassment at Rio Salado is the perception that the college's HR administration isn’t capable of handling the complaints properly. As the policy is heavily reliant on filing complaints, formal or informal, the administration cannot do anything until an investigation.

Crucially, the report says, only one person has been tasked with handling all 530 full-time and 500 part-time employees, plus faculty.

“This level of staffing may be insufficient to allow for every question and concern about possible sexual harassment to be addressed,” the report reads, adding it’s confusing for employees to submit a complaint. “It may be worth considering having an employee advocate who supports employees throughout the process.”