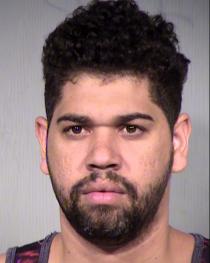 A worker at a government-contracted shelter for migrant children was arrested Tuesday on suspicion of sexually abusing a 14-year-old girl.

The alleged crimes occurred at a Southwest Key Programs facility in Phoenix the night before it was visited by First Lady Melania Trump.

Fernando Negrete, 32, faces felony charges for assault, molestation and sexual abuse. He is in jail on a $150,000 dollar bond.

Court records show Phoenix police were called to the Southwest Key facility last week, nearly a month after the First Lady’s visit. The 14-year-old girl’s roommate told investigators that she saw Negrete enter their room on the night of June 27, kiss the girl and touch her genitalia.

Surveillance video reportedly shows Negrete approaching the room several times that night, but the doorway and bedroom are outside of the camera’s view.

A spokesman for Southwest Key emailed a statement.

“When a child tells us of inappropriate behavior, we immediately call law enforcement and start an internal investigation as appropriate,” the statement said. “That’s what happened in this case. Southwest Key always works with law enforcement to bring the full force of the law to bear when it is warranted.”