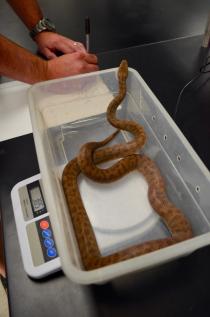 Animals that breed in arid conditions can tap fat reserves for energy when food grows scarce, but how do pregnant vertebrates supply water to unborn young? A new study suggests one risky option.

The research appears in the journal Proceedings of the Royal Society B.

Ecologists often discuss breeding in fiscal terms: Income breeders "pay for" young with available food, while capital breeders "save" fat to "invest" in having babies during lean times.

Such energy budgets don't explain where mothers get the water their embryos need to grow. But some birds and mammals maintain their water balance by burning more muscle and less fat. Muscle yields five times as much water as fat does. Might a similar strategy work for pregnant reptiles?

To find out, scientists from Arizona State University and the Chizé Center for Biological Studies in Villiers en Bois, France, turned to Children's pythons (Antaresia childreni), small snakes found in the wet–dry forest of northern Australia.

Because they must breed when food and water are scarce — so that their young can hatch during the early rainy season — the snakes offered an ideal species through which to examine the question.

They found that the parched, pregnant pythons burned significantly more muscle than the other three groups.

Lead author George Brusch of Arizona State University said this suggests that pythons don't want to burn muscle, which they need for strength, hunting and survival. But for pregnant pythons, it might prove a worthwhile tradeoff, though not without cost.

"It shows that there is a cost. So they could burn muscle, but the babies — there's the same amount of eggs, but the babies, the eggs themselves, are lighter."

Brusch and his colleagues are engaged in follow-up studies to examine characteristics of the egg shells, embryos, immune function and physiology related to dehydration.

British Zoologist John Edward Gray, the first to catalog the species, named Children's python after John George Children, a Fellow of the Royal Society he had worked with at the British Museum.

Study shows animals use muscle for water from ASU School of Life Sciences on Vimeo.