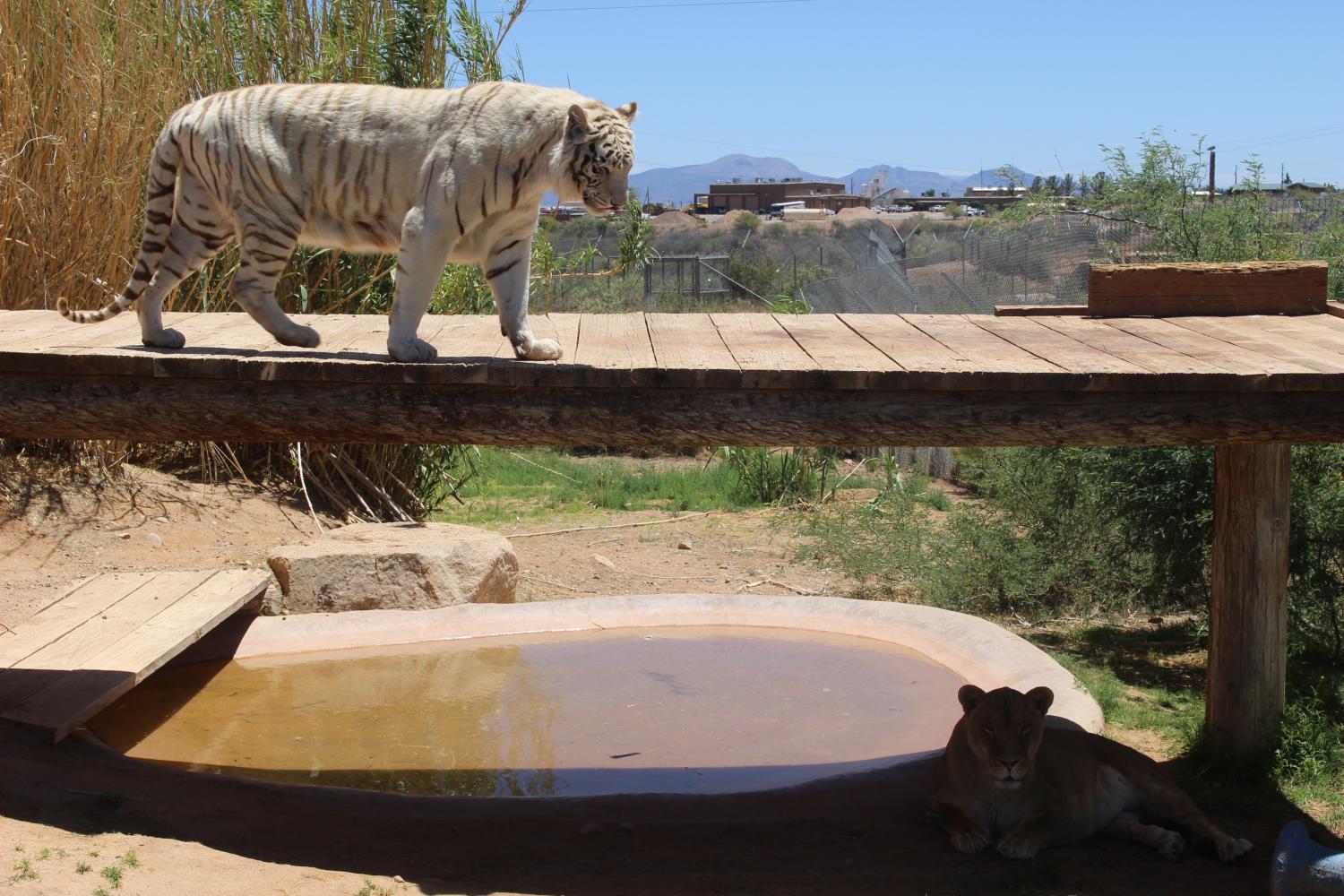 Bret Jaspers/KJZZ
Chalet the tiger parades before a small crowd. at Out of Africa Wildlife Park in Camp Verde, Arizona.

At the exotic animal park Out of Africa in Camp Verde, Arizona, visitors can behold a menagerie that includes a rhino, king cobra and a bevy of wild cats. The marquee attraction at the park is the tiger splash, where staff play with tigers around a swimming pool, trying to get them into the water.

Out of Africa wants to expand to add a hotel, a conference center, and possibly a water park. For the water park in particular, investors would want assurances the site had a defined water source and buy-in from the community. But Jump said at the moment, they wouldn’t be able to present a long-term water plan for something so substantial as a water park.

“Right now, we’re at the risk of a long-term solution being the courts,” he said. “Coming in and making a maybe irrational decision as to how they’re going to allocate water for the whole state.”

The “growth” industry fuels Arizona’s economy — growth in houses, offices and places to have fun. Consistent growth has been possible — in part — because of prudent water management that covers the center of the state.

Outside the population hubs, however, some water rights are still undecided. A judge in the Superior Court is overseeing a lawsuit called the Gila River General Adjudication. Through the adjudication process, the judge will decide on claims to water from various Arizona rivers — or water pumped from wells close to the rivers.

The adjudication has been going on a long time. The legal process started in the 1970s.

“We think we’re at the point where the adjudication is beginning to impact the ability of these communities to grow in the way they aspire to, and also to sustainably manage water,” said Sarah Porter, director of the Kyl Center for Water Policy at Arizona State University.

Porter recently surveyed a few dozen developers and corporate site selectors for the report "The Price of Uncertainty" and found concern about water is growing. She also found that uncertainty about water often immediately disqualifies a site from consideration for investment.

“They will simply move to a place where that uncertainty doesn’t exist,” she said. “They don’t bother with places where there’s uncertainty about water rights.”

Steve Ayres, economic development director for Camp Verde, said a better solution than a court decree would be for the various claimants to come to their own deal, creating a system where water rights can be bought, sold, or leased. 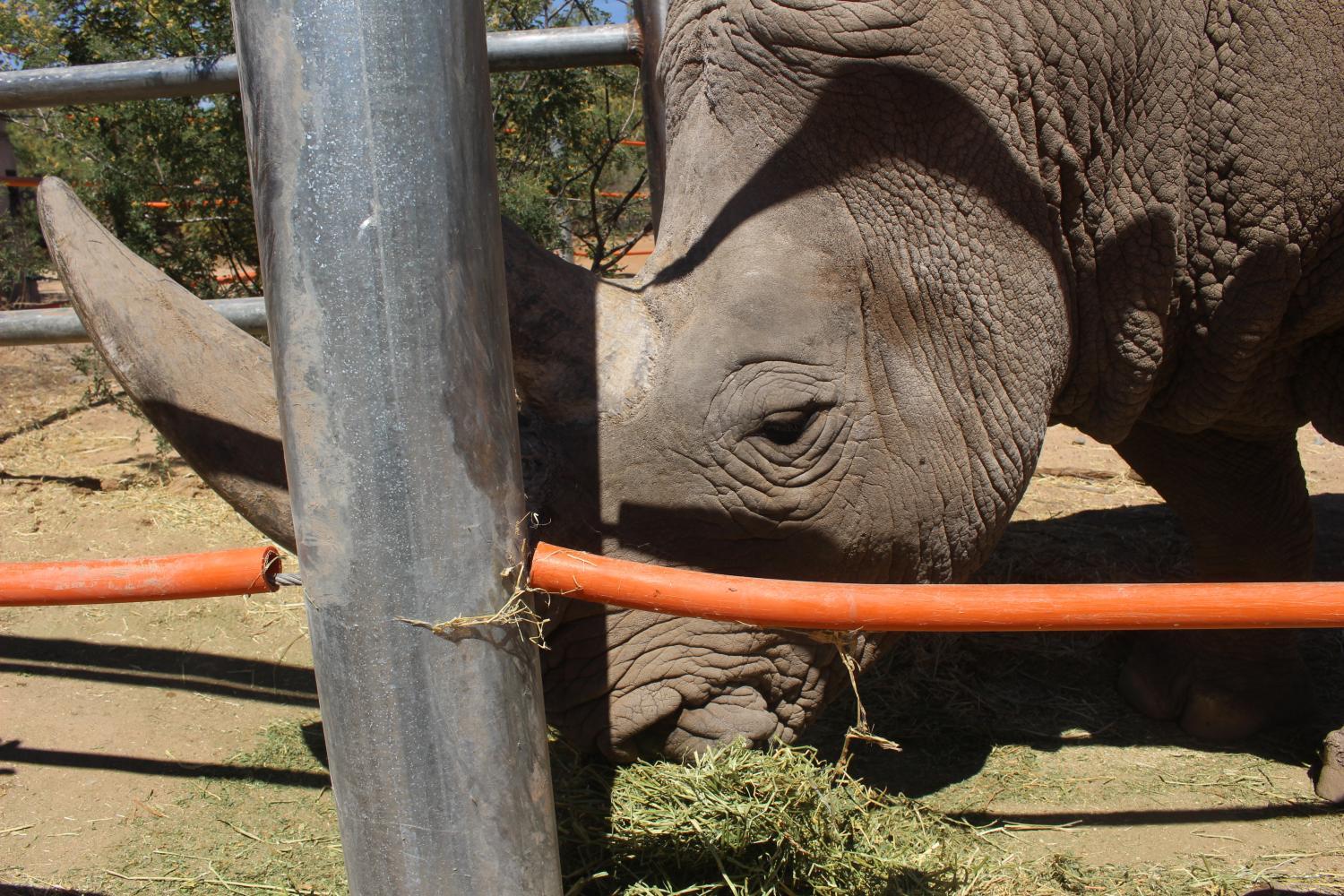 Bret Jaspers/KJZZ
Jericho the rhino at Out of Africa Wildlife Park in Camp Verde, Arizona.

“So when the adjudication court comes here, those parties won’t be objecting to one another’s use. They’ll actually have a deal worked out,” he said. “The court would be foolish not to accept a resolution that is acceptable to both parties.”

And there are some glimmers of this kind of solution. Out of Africa, for instance, is paying another company to use less water through a local water credit program called the Verde River Exchange. That way, the park can offset the 815,000 gallons it uses in the Tiger Splash and otter habitat.

Sarah Porter thinks local programs like these are promising, but there are over 50,000 water rights claims in the Gila River watershed, which includes the Verde and San Pedro Rivers, among others.

“To actually make a settlement work, you have to get enough parties to agree to the settlement. That means compromise on all sides,” she said.

Porter added that a settlement could require state legislation, and there’s already a list of other water issues that need the legislature’s attention.

Ayres thinks some water users don’t want the adjudication completed, because they’ll be told to stop pumping water to which they’re not entitled. So if a settlement doesn’t happen, water users will have to wait - as they have for decades.

“Is it ever going to get adjudicated? I don’t know," Ayres said. "I’m 63. I doubt seriously it’ll happen in my lifetime.”

Bret Jaspers/KJZZ
Steer and spectators at Out of Africa Wildlife Park in Camp Verde, Arizona.