How Arizona's SP Crater Got Its Crude, Colorful Name

You can thank the San Francisco volcanic field north of Flagstaff for birthing some of the area’s best-known natural attractions. There’s Humphrey’s Peak, Arizona’s highest point, and Sunset Crater, a striking cinder cone that’s even a national monument.

But nearby is another, far less famous geologic feature, whose full name we can’t even write out.

You probably know the volcano, if you know it at all, by its abbreviated name: SP Crater.

A few months ago, runners of all abilities lined up on a rugged ranch near the volcano for the SP Crater Marathon. But even with the initials stamped on race shirts, many participants had no idea what they stood for.

When they learned, almost everyone laughed or blushed or assumed it was a joke. One friendly lady from Minnesota exclaimed, “That sounds wonderful.”

Michael Collier
SP Crater, in the desert north of Flagstaff, got its name because of its supposed resemblance to a chamber pot. The miles of lava spewing from the side definitely helped bolster that case.

The name goes back to the late 1800s and a family intertwined with Arizona’s past: the Babbitts. You may know about their cattle ranch or trading posts, or at least their famous offspring Bruce Babbitt, former Arizona governor.

But you may never have heard of C.J. Babbitt.

“Well, he was just such a reserved man,” said C.J.’s grandson, Jim Babbitt. “And he was quiet, and you know, he was very polite.”

Jim described his grandfather as having an air of formality about him, the kind of man who would wear suits every day, even while riding on the range. He was also a practicing Catholic, whom Jim never heard swear.

Jim Babbitt
C.J. Babbitt was a formal man, one who always wore a suit, even when he'd go out onto the ranch to meet with cowboys.

He remembers his shock, decades ago, when he heard how SP Crater got its handle.

“That can’t be my grandfather, naming things like that!” Jim said, laughing. “But it was.”

Imagine Flagstaff in the 1880s, when CJ Babbitt and his four brothers arrived by train from Ohio. It was a small, frontier town then, with no indoor plumbing. So, a bedroom might have a porcelain receptacle for what you might call “nighttime deposits.”

“And I don’t know if you’ve ever seen an antique chamber pot,” Jim said. “But it has a flat top and kind of rounded sides. Maybe you can look it up on Google or something.”

When Jim’s grandfather glimpsed a giant cone rising from the desert with a dip at the top and a black field of lava spilling from its side, “something put it in his head that it looked like a chamber pot,” Jim said, smiling. “Or, in less polite terms, a s—pot. That’s as far as I’m willing to go!”

That’s as far as cartographers are willing to go as well. SP Crater has only ever been on the map under its sanitized name.

But that abbreviation has endured, despite its true meaning.

Mark Monmonier, distinguished professor of geography at Syracuse University, said this kind of thing is not unheard of.

“In the realm of mapping, I think that that simply is a matter of accuracy,” he said.

He described how, when representatives from the US Geological Survey were dispatched across the country for the first time more than a century ago, their job was to record place names used by locals. Those names could be Bloody Basin, Baby Jesus Ridge or Nipple Butte. Those are all in Arizona, by the way, and are all still recognized by the USGS.

“And once they’re in this database, they’re going to be there for a long time,” Monmonier said. 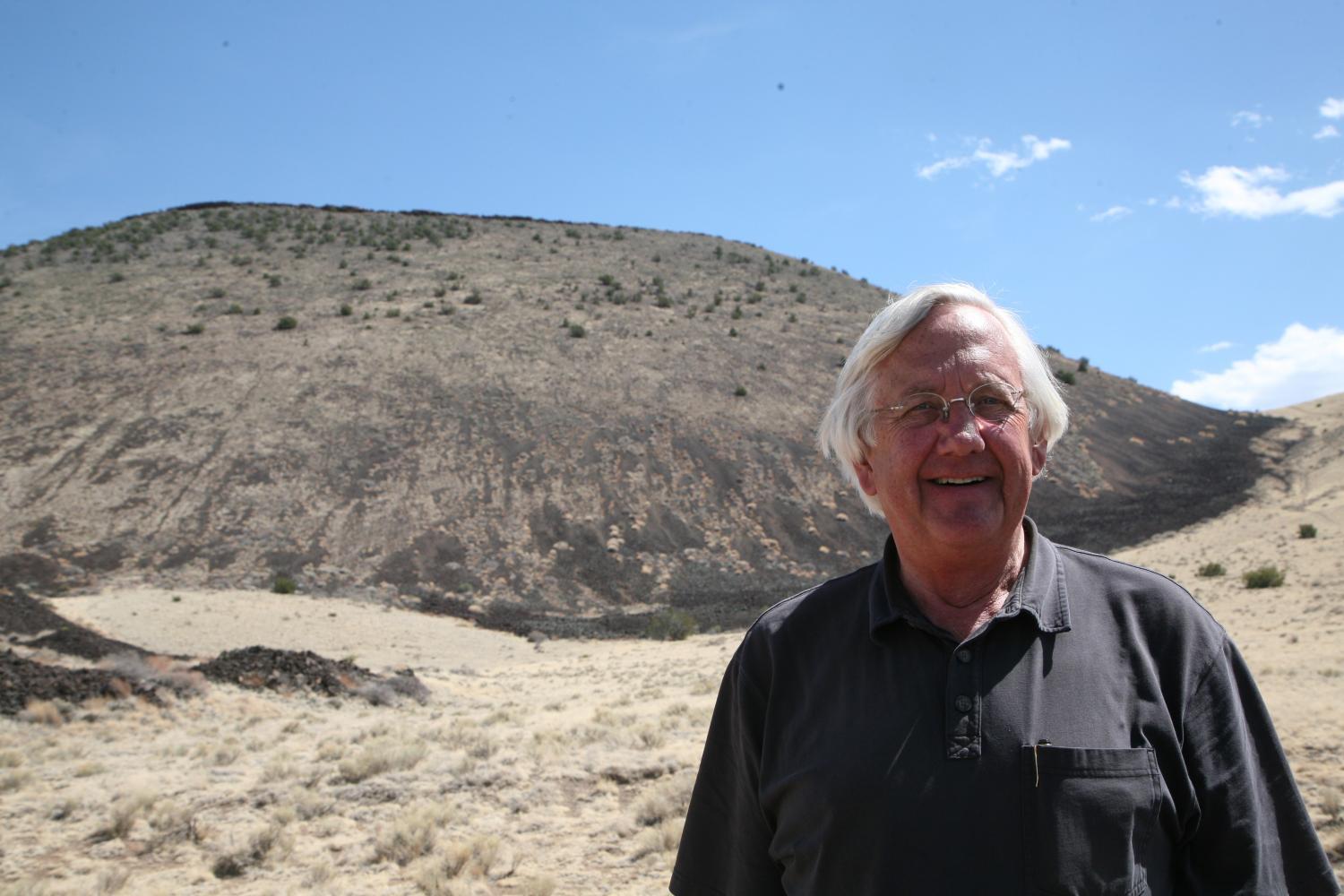 Stina Sieg/KJZZ
Jim Babbitt, C.J.'s grandson, says he didn't know SP Crater's full name until after his grandfather died. Knowing how taciturn the man had been, it came as a shock.

He explained that names are usually only changed when there’s public outcry — and when an alternate name is approved through a complex governmental process. Generally, names like SP Crater are pretty safe.

That’s good for Jim Babbitt, who sees those two letters as a connection to his grandfather, who died when he was just a boy.

Driving past the crater, Jim remembered how the old man always wanted to spend time there on his ranch.

And while Jim doubts his grandpa would ever understand the whole running thing, he thinks he’d like knowing that, every year, folks race through his land — even if they never know the full name of the crater they’re panting past.