These injectable medications can be used to treat schizophrenia in the place of some oral medication.

“One advantage of these medications is that  they are injected once a month or sometimes less frequently than that,” said Grant Phillips, the medical director of Maricopa County’s Correctional health services. “The patients can stay stable for a long time with their psychiatric condition.”

These injections can cost thousands of dollars per dose and are more expensive than oral versions of the medication.

The county estimates that while 3 percent of the jail population (about 200 people) use long-acting antipsychotic drugs, the cost is 20 percent of the monthly pharmacy budget.

The Maricopa County Board of Supervisors approved resolutions related to agreements with three pharmaceutical companies for their respective long-acting injectable antipsychotic drugs.

Phillips said he expects the savings to the jail to be “fairly significant.”

Psychiatric providers that work within the jail — and the community — recommended the county look into a free sample program like those offered to doctors and hospitals, Phillips said.

“Of course it’s a good business move for them to want to continue these patients on their medication,” Phillips said of the pharmaceutical companies.

RELATED: 24 Hours From Arrest To Release To Services For Seriously Mentally Ill In New Program

The Marshall Project reported in February Janssen received approval to market Invega Sustenna as a way for people with schizophrenia to stay out of jail.

All three companies issued statements in response to KJZZ’s questions. 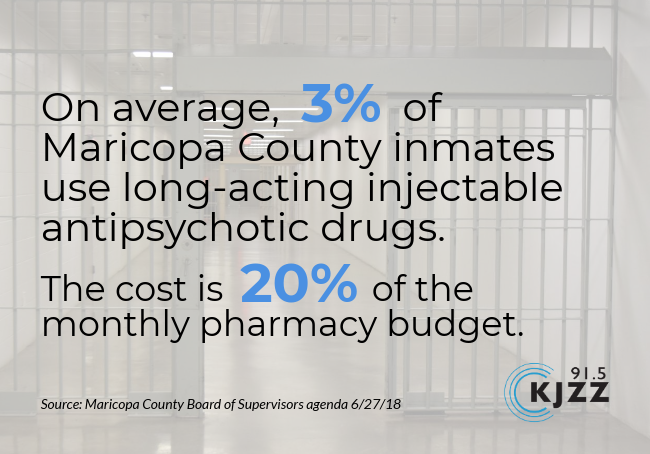 “Our sampling programs allow prescribers to familiarize themselves with the medicine and for patients to try the treatment and together with their health care provider, determine if it is the right fit for them,” said Kaitlin Meiser, leader in neuroscience product communications for Janssen Pharmaceuticals. “We conduct all sampling compliantly in accordance with the Prescription Drug Marketing Act.

Phillips said the majority of inmates who currently receive long-acting injectable antipsychotic medications in jail were already taking them before they were incarcerated.

“Instead of it coming from pharmacy and costing the taxpayers money, they get it instead from sample agreement from pharmaceutical,” Phillips said.

Pharmaceutical company Alkermes said its drug Aristada “can be an important treatment option for individuals living with schizophrenia who are re-entering the community.”

If a person is given a long-acting antipsychotic injection shortly before release the effects will last for up to two months.

A Swedish study found people who had been incarcerated were less likely to commit violent crime after being released when they were taking antipsychotic medications versus when they were not.

Otsuka America said in its statement it did not specifically seek out an incarcerated population for its sample program.

“In some cases, the licensed healthcare professionals who request samples are working within a correctional system to treat patients with schizophrenia or bipolar I disorder,” wrote spokeswoman Lucy Abreu. “The program is not unique to Maricopa County corrections department."

Janssen and Otsuka and their respective drugs were both recently mentioned in an NPR and Center for Public Integrity investigation about the influence of the pharmaceutical industry on state Medicaid programs.

Pharmaceutical companies paid an Arizona doctor, Mohamed Ramadan, more than $500,000 to promote drugs, including those made by Janssen and Otsuka.