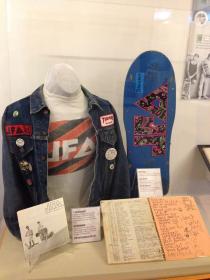 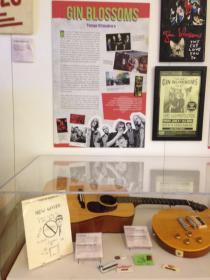 (Courtesy of Kris Baxter-Ging, City of Tempe)
A portion of a new exhibit at the Tempe History Museum dedicated to the Gin Blossoms.

Arizona’s musical tradition is long and storied, from the cowboy and cowgirl ballads of the territorial days all the way to rock artists like Jimmy Eat World. But Tempe in particular has had a reputation for incubating musical talent, especially in the 90s.

The Tempe History Museum is exploring the city’s unique musical history in a new exhibit called “The Tempe Sound,” which opens Friday.

When most people hear the term “Tempe sound,” they think of the jangle pop of bands like the Gin Blossoms. But if you dig a little deeper, you’ll find that Tempe music goes back way further.

"The earliest performer that we acknowledge in the exhibit is a gentleman by the name of Chapito Chavarria, who came out of the Tempe barrios and started playing professionally in Tempe in the 1920s," said Josh Roffler, the curator of the exhibition.

"He told me some great stories about what it was like living in Tempe and about how important music was back then when it was really a main form of entertainment," Roffler said. "And really the force that brought the community together. And it was the thing that allowed people to be social and to meet each other as the weekend dances."

Most people recognize Waylon Jennings’ Arizona connection, but may not realize that he has roots in Tempe.

"He got his start as a solo artist here in Tempe," Roffler said. "In the mid1960s, he started playing at a club called JD’s. Waylon played there seven nights a week and became popular locally. Released his first solo album from JD’s, and it was based on that popularity that he was able to go to Nashville and become a country music superstar."

"He was a Chicago blues musician for a long time, but ended up moving to Tempe in the 1980s and established his own band here. But he was definitely a Tempe fixture for a lot of years, Chico," he said.

Throughout the exhibit there are photos and artifacts unique to each artist, such as sheet music and a violin from Chapito Chavarria. And for Chico? A giant pair of steer horns that he used to mount on his bass drum, a reminder of his flamboyant personality.

"In the early 80s, there was this really active Tempe punk-rock scene and two of the bands here in Tempe that were a big part of that were JFA and the Meat Puppets," Roffler said.

JFA, which stands for Jodie Foster’s Army, is one of the most famous hardcore punk bands from the Southwest.

"They were one of the first skate punk bands that really helped define that genre of skate punk," Roffler said.

Right next to a JFA skateboard is a display devoted to the uniquely cowpunk band the Meat Puppets.

"This right here is the first Meat Puppets 7” single. It’s called 'In a Car,'" Roffler said. "Their early sound back in 1981 was definitely more hardcore punk, and then by the time they came out with the 'Meat Puppets II' album they were really getting very creative and bringing in a lot of country influences and Southwest influences and really developing a sound all their own that became really, really influential."

Influential on bands like Nirvana, who the Meat Puppets played with on MTV Unplugged.

"Once you start to get into the late 80s and early 90s, this is I think what immediately comes to mind for most people," Roffler said. "It’s the Chimeras, Pistoleros, Gin Blossoms, Dead Hot Workshop — that era of music."

Considered by many to be the grandfathers of the 90s Tempe music scene, Dead Hot Workshop and its members are deeply admired by many of their contemporaries.

Probably the most nostalgic piece of the whole exhibit, a re-creation of the stage at Long Wong’s, is one of the most adored music venues from Mill Avenue’s heyday. It has a large window, framed by colorful, tacky curtains and a tiling that looks like punched tin. The stage is filled with beat-up Marshall stacks, a bright red drum kit and even some Styrofoam cups.

"A lot of this equipment that we have, it’s the same stuff that was used at Long Wong’s," Roffler said. "I mean, these are Dead Hot Workshop’s amplifiers."

Around the corner from that is a case devoted to the Gin Blossoms and one to its iconic songwriter, Doug Hopkins.

"He wrote a lot of the songs that people think of when they think of that Tempe sound from the 1990s," Roffler said. "I think he’s one of the figures that really sort of helped define that classic Tempe jangle pop alternative music sound. And he was in a lot of bands over the years."

Throughout the exhibit, you’re reminded that all of the artifacts — the ticket stubs, the show fliers, the T-shirts, the instruments — were donated by bands and fans.

"What it tells me is that this stuff is really important to people," Roffler said. "It brings back memories for them, it speaks to an important time in their lives and so they want to hold on to physical pieces of it."

Roffler said Tempe is unique. It’s a place where diverse musicians can find an audience. The diversity of the musicians themselves is somewhat narrow. There were only two women featured, but the sounds and stories represented are many and varied.

"Just a great creative hub where people can experiment and in some cases innovate and find new styles of music," Roffler said.

And even though Tempe continues to undergo many changes, it’s still a place that lots of musicians call home.

A Native American archeologist on how her field can shed light on the history of people of color.