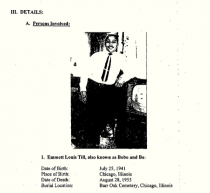 FBI
An image from an FBI report on the death of Emmett Till.

In 1955, 14-year-old African-American Emmett Till was lynched in Mississippi. He’d been accused of doing something to offend a white woman. More than five decades later, that woman recanted the story.

Now, the U.S. Department of Justice has announced it will reopen the investigation of Till’s killing after receiving what is being called new information. The situation around Till became extremely high-profile, but it is far from the only civil rights-related killing in the mid-20th century in the United States with an unsatisfactory legal conclusion.

Paula Johnson, a Syracuse University law professor, is involved in looking into some of those cases in her position as co-director of the Cold Case Justice Initiative. She joined The Show to talk about her work.