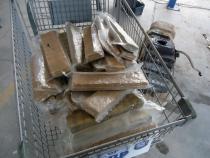 This increased penalty is in line with the Trump administration's “zero-tolerance” immigration policy.

The Arizona Daily Star reports that hundreds of people are arrested each year in Southern Arizona for smuggling marijuana in backpacks. Often, they’re doing this for smugglers who will then waive their smuggling fee.

A typical sentence has included six months in prison for marijuana possession.

Now, offenders will concurrently serve a sentence for illegally crossing the border. While the new penalty will not increase their sentence this time, it could be used to lengthen sentences for future convictions.