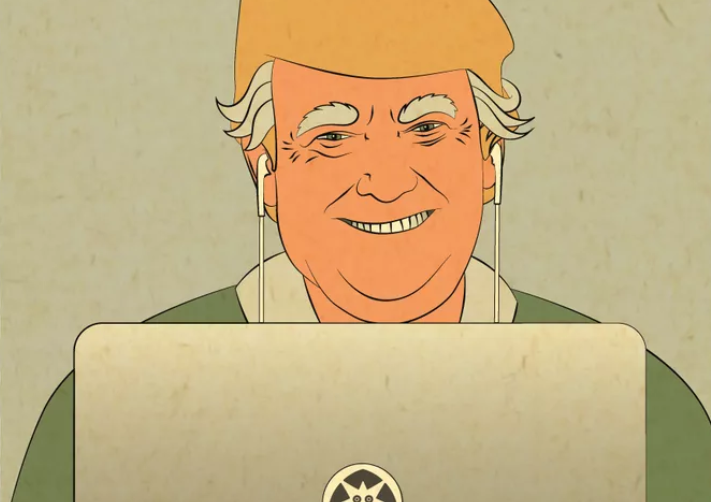 Let’s imagine — just for a moment — that instead of the tough-guy persona President Donald Trump likes to exude, Trump was a “nice” guy.

Anyone that follows Trump on Twitter knows he's not afraid lash out against his political enemies and call people names. But what if Donald Trump was a kinder, gentler personality type?

J.P. DOWNER: It really came down to… I would just see these pictures of him, you know. People would use pictures of him making his smug faces as kind of like, you know, look at how smug he is, and then I just kind of thought, what if those faces were reimagined as feeling of kind of self-congratulations for doing the right thing, making the right decision, helping somebody out or something like that?

JIMMY JENKINS:  Let's describe the comic. Each one consists of three panels depicting Don, Decent Don, but it's the president, obviously, as an everyday good guy who performs random acts of kindness and he's kind of like the ultimate Good Samaritan. So tell us about some of his humble displays of humanity that you've created.

DOWNER: Oh there's a wide array of little decent deeds that he's done. You know, he doesn't really go out of his way too much, more than he just kind of makes the right decision to kind of be considerate of how his actions are going to affect someone else. One of the most basic ones is he's splitting a cookie with someone and he breaks it in half, and he realizes one half is bigger than the other, so he offers the bigger half to someone else.

JENKINS: Yeah, and he seems to take pride in his decentness, too. My favorite is when Don helps out a guy in a band changing his tire, then the guy tries to reward Don with the tickets to the show. But Don just says, "That won't be necessary," and we see him pulling out the tickets from his own pocket, which had already purchased. So he's aware of his kindness, right?

DOWNER: Yeah that's right. He does feel good when he does something good for somebody. There is a basic formula to the comic. He's presented with a situation. He makes his decision how he's going to handle it, and then him feeling good about the way he dealt with the situation.

JENKINS: What do you think he sounds like? Do you hear him when you draw him?

DOWNER: That's really funny. Yeah, it's not the Donald Trump voice at all. It's just a very mild mannered, you know, matter-of-fact guy — just a normal kind of gentle voice.

JENKINS: Do you know anyone like Don in real life?

DOWNER: It’s more of a — what I would like to be like. But I know that he’s much more decent than I am. I definitely think of him when I’m sometimes making decisions that benefit me more than the greater good. But it’s more just like a model of the decisions I would like to make in everyday life.

JENKINS: It seems like — no matter your politics — it would be nice to have a leader with a moral compass like Decent Don.

DOWNER: Yes, that’s very true, because it’s really about him putting other people before himself and just kind of knowing that everything he does affects society and other individuals a certain way and so he’s very considerate of that.

JENKINS: What’s the reception been like have you heard from any Trump supporters? I wonder if you have a better opportunity to reach people because, you’re not being nasty or critical you’re actually trying to show this person in the best light possible.

DOWNER: Yeah I really haven't got too much pushback. I think that people just kind of move on if they don't get it or, you know, there's not much they can say about it. They can't really say, oh well he wouldn't do that, because that's not a very strong argument on their side. Part of the thing that I like about it is that I can probably get under people's skin but they don't really know why. I mean, even people that hate Trump have told me, like, I can't look at it even though I get what you're trying to do, and that actually gives me a little... I like that, too, because just any kind of reaction like that, that people can't quite explain, is good enough for me.

JENKINS: Does it give you that Decent Don smile of appreciation?

JENKINS: Well JP Downer, thank you so much for creating this comic and for talking with us today.

DOWNER: It was my pleasure.