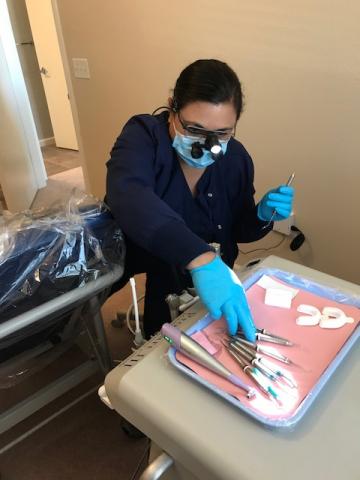 Kathy Ritchie/KJZZ
Smiles By Delivery Owner and dental hygienist Elaine Mamola works on a 97-year-old woman with a broken crown. She says one of her biggest fears is that there is no oral health plan in place for Baby Boomers.

In 2014, 1.4 million Americans lived in a long-term care facility, according to the Centers for Disease Control and Prevention.

Long-term care is a growing business, and families who rely on that care, often assume that every need is being met. Most of the time, it is. However, there are a few cracks in the system.

Kirsten Roling is a dentist with Smiles by Delivery, a mobile dentistry service that crisscrosses the Phoenix area providing oral care to residents in long-term care and skilled nursing. On this day, she and her dental hygienist are visiting an assisted-living facility in Glendale. A 97-year-old woman with a broken crown is sitting in the portable dental clinic.

She said oral health care, or the lack of it, specifically in these facilities, is a public health issue. And the reasons why means solutions are tough to come by.

But it often starts when a person turns 65.

"There’s not dental benefit built into Medicare. So many people who were Baby Boomers who had good dental benefits in connection to their employment" may go without, unless they choose a Medicare Advantage plan or supplemental dental insurance, said Kevin Earle, the executive director of the Arizona Dental Association.

Dentistry is also very expensive and low reimbursement rates means dentists may not want to work with this population. Then there’s the dentistry itself; think implants and crowns, without regular care.

"Patients that have entered a facility where within a year, their dentistry has been completely wiped out, often by dry mouth," Roling said.

Dry mouth can affect older adults taking certain medications. But some residents take multiple medications that cause dry mouth, and Roling said it can cause tooth decay very quickly.

And that bacteria can be inhaled and lead to aspiration pneumonia, it can also exacerbate conditions like diabetes. Nursing staff are supposed to brush teeth and remove and clean dentures daily, but Roling and others don’t think that’s always happening.

Ann Ross is a dental hygienist and the owner of Mobile Dentistry of Arizona. She says tooth loss, decay and abscesses are common in this population, and she has seen it first hand.


"Our dentist removed [a woman's] upper denture and lower partial and my dental assistant whisked it away to get it cleaned," said Ross. "What we saw was pretty horrific. Her dentures for the most part were black. They were covered in black mold, you know the stuff you scrub away with a toothbrush along the shower."

Ross said she talked to the nurse and some of the caregivers about the woman's situation.

"They did not know that she had a denture or a lower partial," Ross said. "She had lived at this community for over six years."

Ross was one of four oral care professionals interviewed for this story with similar accounts.

Residents who move into a facility that accepts Medicare or Medicaid are supposed to get a federally mandated assessment by a nurse or an oral health professional, but that may not be happening.

"My understanding is that screening is rather cursory and often not performed by an oral health professional, either a dental hygienist or dentist. So a nurse my not readily identify things that are potential problems," Earle said.

Both Roling and Ross agree: the assessments aren’t adequate. 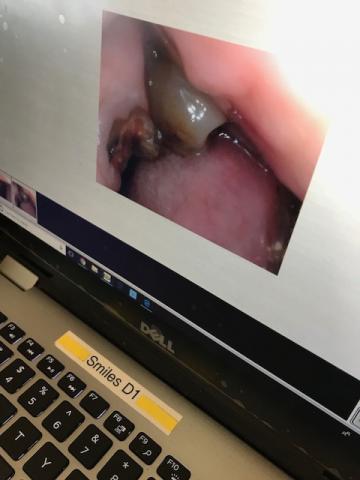 "So, for instance, we’ll see, ‘Patient’s teeth look fine.’ That’s the assessment and they really have dentures. They have natural teeth so we know a dentist probably didn’t do that assessment," Roling said.

Ross has even created half sheet assessment for staff, which includes questions like, “when was the last time a patient visited the dentist?”

Sylvia Balistreri was the director of quality and regulatory services at the Arizona Health Care Association (AHCA), which represents some 200 assisted living and skilled nursing facilities. She now consults with long term care facilities.

Balistreri said certified nursing assistants (CNAs) learn how to remove and clean dentures and brush teeth in their training. But is that training robust?

"I don’t know if I would use the word robust," said Balistreri.

When a certified CNA enters a facility, she said many places provide additional training on oral health, though it’s not mandated. She also said facilities will go through a check list to make sure CNAs can perform oral care.

David Voepel is AHCA’s executive director. He said facilities have to meet a certain standard of care and the state inspects them.

"If you go into an assisted living, or nursing facility, especially a high acuity nursing facility, there are a lot of moving parts, trying to take care of everybody," Voepel said. "Are there things that fall through the cracks? Should they? No. They shouldn’t. Again, its humans taking care of humans."

And sometimes residents with Alzheimer’s disease or other dementias can become agitated, combative or even refuse care.

And that’s where family comes in, but sometimes family involvement is limited or non-existent. Even if the family is involved, they may not realize such tasks are being missed. Which raises the question: Is this something facilities should be very honest about needing help with from families?

Voepel said the question is "a tough one." Balistreri said, "I guess my personal feeling is the facility should be doing that as part of their routine care."

The state is set to release an oral health action plan with recommendations for Arizonans of all ages in the coming days.

States Ranked By Quality Of Dental Care For Older Adults