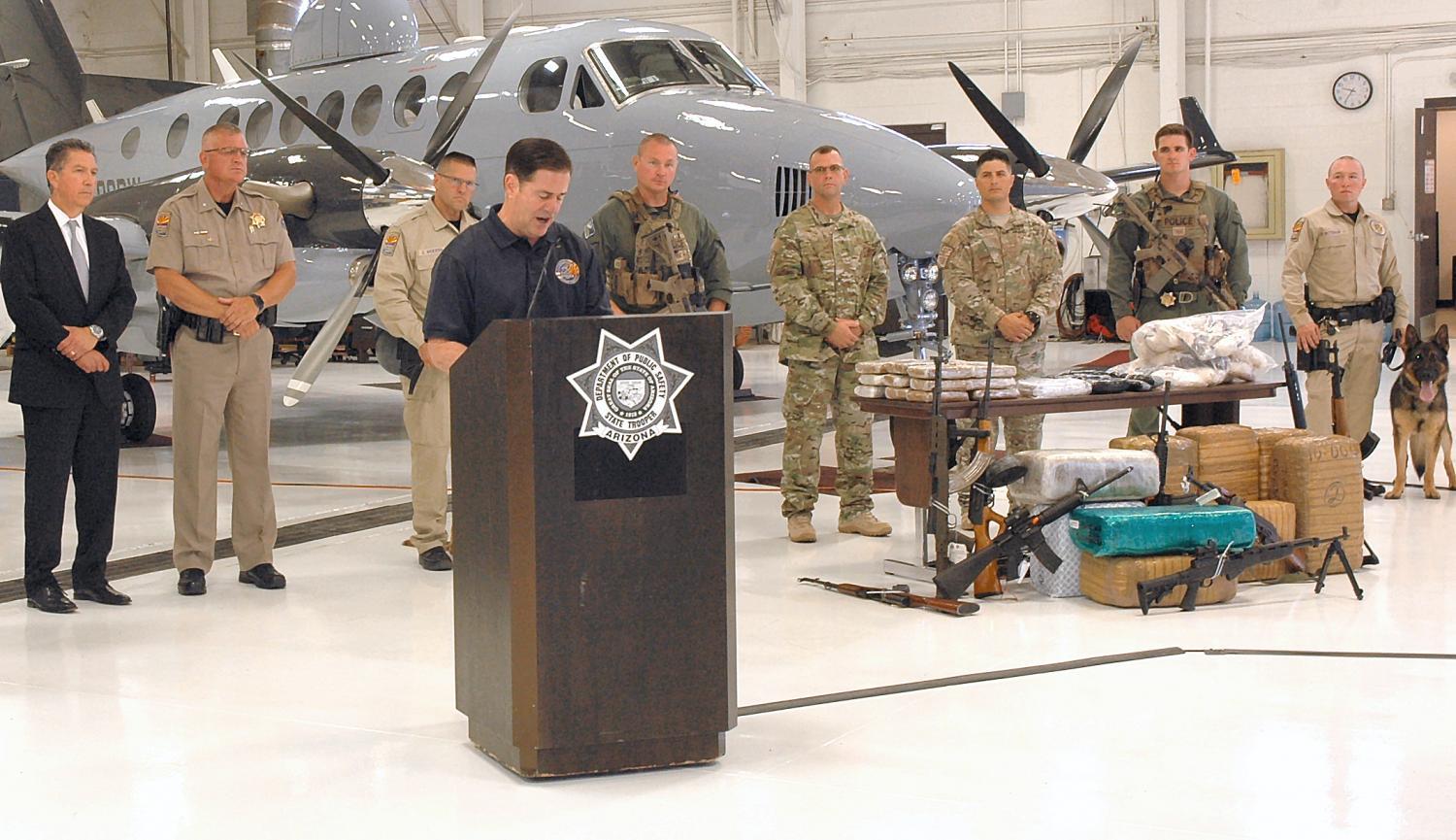 Howard Fischer/Capitol Media Services
With law enforcement and seized weapons in the background, Gov. Doug Ducey on Wednesday details for invited media — and campaign photographers — the success of the Border Strike Force.

With a staged backdrop of seized guns, drugs and even DPS officers with dogs, Gov. Doug Ducey brought together federal, state and local law enforcement who praised his leadership on border security.

During this Wednesday press conference, Ducey announced the state will spend $2.9 million next year on the Border Strike Force, the partnership with local law enforcement and the Border Patrol he established shortly after taking office in 2015. Since its inception, the Strike Force has seized 60,000 pounds of marijuana, 300 guns and “enough fentanyl to kill 11 million Americans.”

“With all this, our message to drug cartels and human traffickers are loud and clear. The people of Arizona have had enough. We will find you, we will stop you and we will bring you to justice,” he said, adding that the new funds will bring the Strike Force closer to their goal of 24/7 coverage.

Ducey, facing reelection this year, invited the media to the event at the Department of Public Safety. In a prepared speech, the governor said the state and its partners stepped in because calls on the federal government to secure the border "too often ... has been met with empty words and little action.''

But Ducey's remarks in the closed hangar had another audience: a videographer and photographer who also were invited — and who were recording all this for a future campaign commercial.

The governor, questioned about having campaign photographers videotaping what was billed as a press conference put on with taxpayer resources, insisted there was nothing improper about the event or their taping of it for his campaign.

"This is a public event,'' Ducey said. "Anyone who wants to come can come.''

But only the media — and his campaign — were notified less than 24 hours earlier that the governor was going to provide "the latest updates on the Arizona Border Strike Force.''

In fact, that invite was conditional. Only those who got it and responded were told the location. 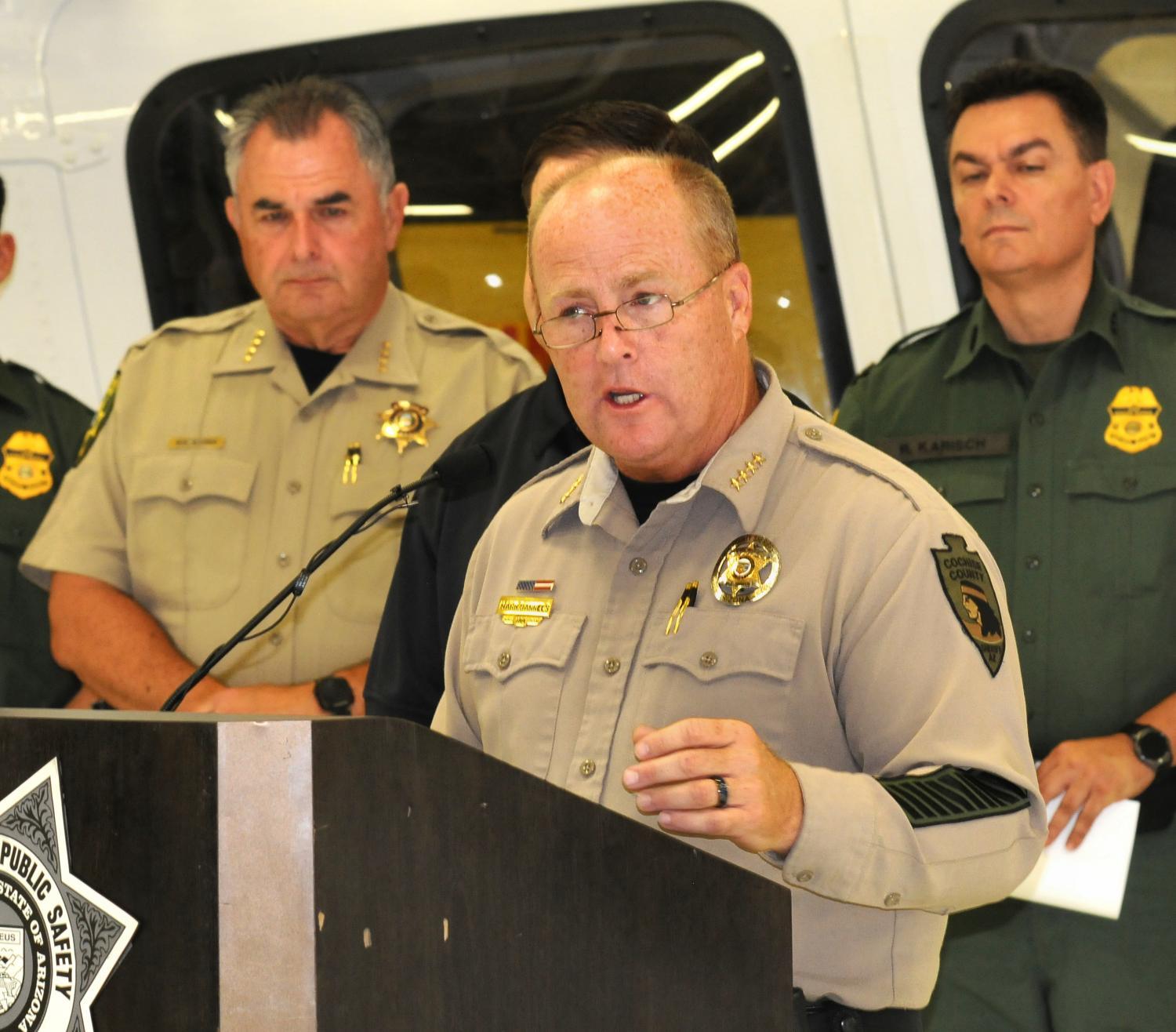 The governor's office did not respond to repeated requests for a list of those to whom the invitation was sent.

Ducey argued that the update about the strike force at the DPS hangar was just part of doing his official duties.

"I'm not going to stay home because it's an election year,'' he said.

"We have real issues at the border,'' Ducey said. "This is an event around the Border Strike Force and highlighting the success we've had in relationship with our federal government and local law enforcement.''

But while Ducey billed the event as open to the public, the videographer hired by the campaign, who did not provide his name, repeatedly shielded his face any time someone from the media sought to take his picture.

The half-hour event featured a parade of speakers. That included Rodolfo Karisch, chief agent for the Tucson sector of the Border Patrol.

"I want to start off by thanking Gov. Ducey for his leadership on this issue as we all tackle the border security problem together,'' he said for the assembled cameras. Karisch said that includes the governor's decision to deploy National Guard troops to the border to help with "logistical and administrative support so that we can get more agents back to the line.''

Karisch, questioned afterwards, said he was not participating for political purposes or to benefit the governor's reelection campaign.

Pima County Sheriff Mark Napier said the complex nature of dealing with crime along the border means no one government agency can solve it.

"It absolutely requires a coordinated, collaborative and comprehensive approach to solve these problems,'' he said. But Napier said his praise extends beyond DPS and Border Patrol.

"We have a governor that keenly understands the issues around border security,'' the sheriff said. "He's an active partner with our border sheriffs, with our state, local and federal partners, and he understands the scope and nature of the problem.''

Cochise County Sheriff Mark Dannels, after thanking the governor for his support, took the opportunity to boast of the "zero tolerance'' program his agency has instituted which means that anyone caught smuggling drugs will be prosecuted. The result, he said is "100 percent of those individuals are now sitting in the Arizona Department of Corrections.''

"As a result, Cochise County is now a safer and better place for our citizens,'' Dannels said.