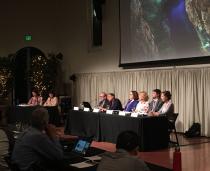 Arizona is working on a contingency plan in the event of major water cutbacks from the Colorado River.

It was a meeting of the water minds in Phoenix as local, regional and federal policy directors came together to answer questions at a meeting discussing that future Tuesday.

“We hope to avoid that situation of any kind of battles on one hand or lack of decision on the other hand," Cooke said.

The meeting involved questions from the public on who will be most affected under the new plan if Lake Mead's levels drop to a dire level, and whether leaders can finally come together to hammer out the details.

The plan going forward is to discuss key issues with the 40-person committee, including impacts on agriculture.

Under the proposed cutback plan, central Arizona farmers would be hit the hardest.

“I think we had somewhat of a difficult time getting everyone’s attention," Orme said about agriculture interests being represented among high-level water talks. "But it seems that now we’re in the conversation, which is important.”

Orme was invited to be part of the DCP discussion committee being assembled, and has accepted the offer.

The current drought plan cuts back half of the Colorado River water used by Arizona farmers when Lake Mead first falls below a certain point.

The new plan would cut all of the water farmers use as soon as it first hits that cutback point.

Cooke said partnerships will be crucial to finally getting a drought contingency plan, or DCP, approved.

“Or the result will be that somebody perceives that they’re being ‘stuck’ with the outcome of doing DCP," Cooke said. "And that will make it much more difficult to have the folks coming together when we do go to the legislature [saying] 'we all think this is a good thing, let’s do it, let’s approve it.'”

The hope is to have a plan approved by the state legislature so that the Department of Water Resources director can sign and put it into action. The next meeting will be in late July.

Sustainability The Show
Casey Kuhn On KJZZ's The Show