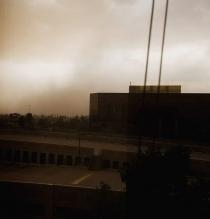 Ambar Favela/KJZZ
The view from Rio Salado College in Tempe on July 9, 2018.

It’s been a scorcher of a summer, with high temps and hot breezes and no rain in sight — that is until just about 3 p.m. on Monday.

Meteorologist Larry Hopper, with the National Weather Service, says hail — up to penny size — and rain swept the Phoenix area. The highest amount of rainfall recorded was 1.72 inches in northwest Phoenix.

Then there were those winds. Sky Harbor Airport recorded wind gusts of 71 miles per hour but it was a city to the east that clocked the most impressive stat. With wind, comes wind damage. SRP says customers in Apache Junction and Mesa were hit hardest. Jeff Lane is a spokesman for the utility. He says there are 26 different locations where either poles or lines are down, mostly in the East Valley. To help customers deal with the heat and humidity while the power is out, SRP has been distributing free bags of ice to their customers.

In the city of Phoenix, officials say emergency crews responded to several different kinds of calls. There was one water rescue, the light rail briefly lost power, and there was some flooding in Laveen. One apartment complex even had its roof blown off and the debris hit a man in the parking lot who was observing the storm. He was taken to the hospital.

In Apache Junction, about 2,000 customers in the city are still without power as of 8 a.m. Tuesday morning. Al Bravo, spokesman for the city, says many people have stepped up to help.

He says they only got about a quarter an inch of rain in the city this time around, but he says the city has a lot of washes and that can pose a problem as we see more rain this season.

Across the Valley on Tuesday, crews are cleaning up fallen tree branches and other debris. Larry Hopper at the National Weather Service says it’s important, while clearing debris on the ground, to keep an eye on the skies.

In the meantime, Hopper says look for temperatures to hover below normal — that’s below the century mark, for those of you counting. There’ll be something the air Arizonans aren’t always used to, but we should all know by now, monsoon season can be a sticky situation, rain or shine.