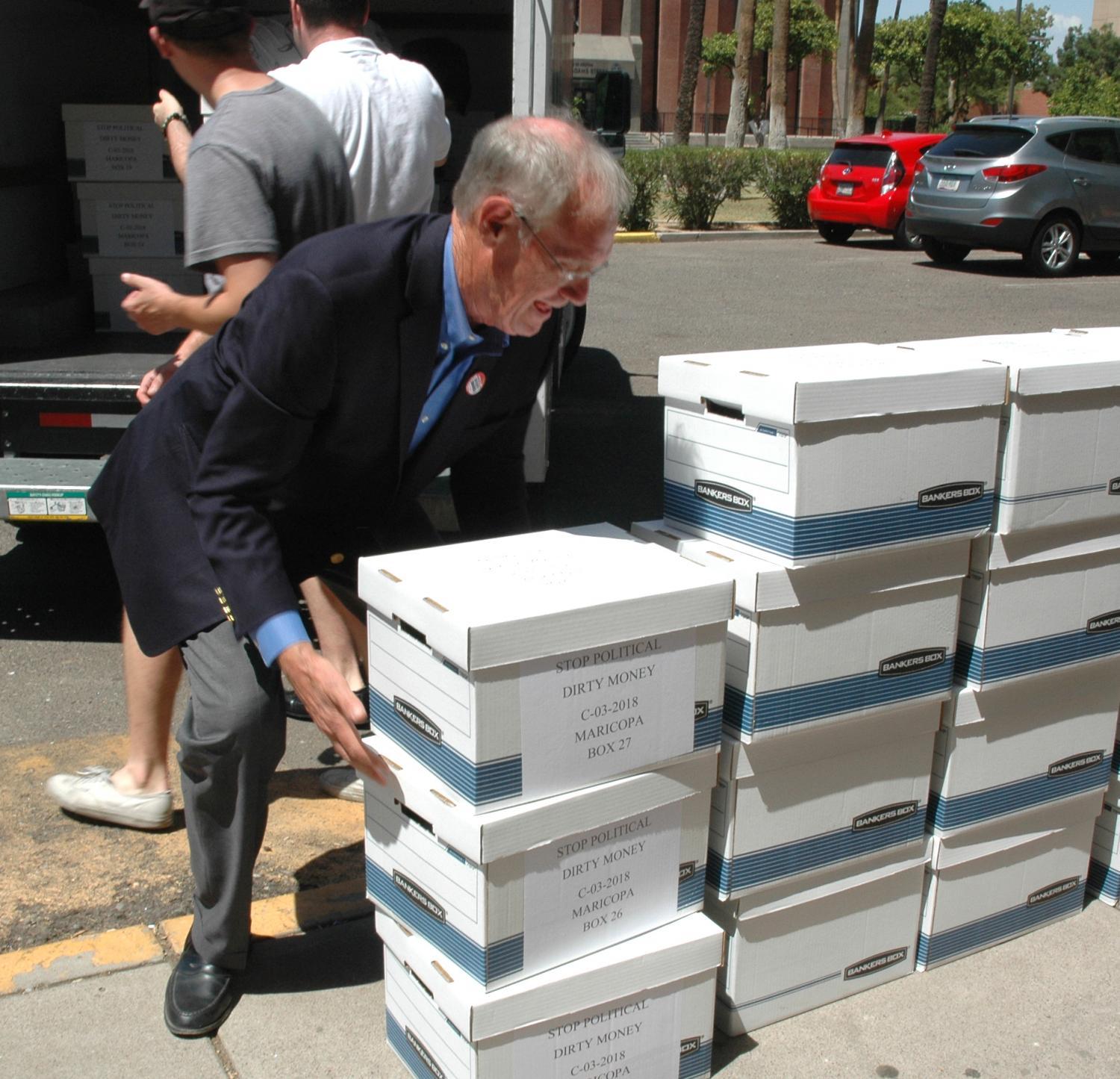 Voters will likely decide in November whether to approve a constitutional amendment to mandate the disclosure of political donors.

Organizers, lead by former Attorney General Terry Goddard, submitted more than 285,000 signatures Thursday to put the issue to voters. That's only about 25,000 more than need to be found valid to have the constitutional amendment on the Nov. 6 ballot.

But Goddard, who dubbed the campaign "Outlaw Dirty Money," said he's convinced that the error rate will be low enough to meet the goal.

At the heart of the fight are state laws which say that any group recognized by the Internal Revenue Services as a "social welfare'' organization need not spell out who is financing the effort. The result has been a series of campaigns for statewide and legislative offices where funds flow into mailers and commercials on behalf of candidates, with no disclosure of who is spending the money.

Earlier this year the Republican-controlled Legislature voted extend that same protection against disclosure to local elections. That most immediately overrode the 91-9 percent vote by Tempe residents months earlier to prohibit anonymous donations to city races.

The initiative, if it makes the ballot and is approved, would insert a "right-to-know'' provision in the Arizona Constitution, requiring any group seeking to influence a political race or ballot measure to reveal the identity of anyone who contributed more than $10,000. As a constitutional amendment, it could not be overridden by lawmakers without asking for voter approval.

Goddard said it is structured to also guard against "chain donations,'' where one group gives to a second and that one funnels money to a third and so on. He said the law requires the organization that ultimately spends the money in Arizona to trace those dollars back and disclose the original source.

"That's the sums and the millions of dollars that are being spent in Arizona elections,'' he said while filing the petitions Thursday. "And we have no idea where they come from because our laws don't require disclosure of those contributors.''

He acknowledged that courts have long ruled that the constitutional right to free speech also includes the right to anonymous speech. But he said what the initiative seeks to regulate is different.

"You're mixing up the right to speech and the right to contribute,'' Goddard said. "When someone contributes and gets a big microphone the law is very clear that it is perfectly legal to ask them to disclose.''

Goddard said this is not a partisan issue, saying the campaign also is being led by Republicans like, Grant Woods, another former attorney general, who is a Republican. 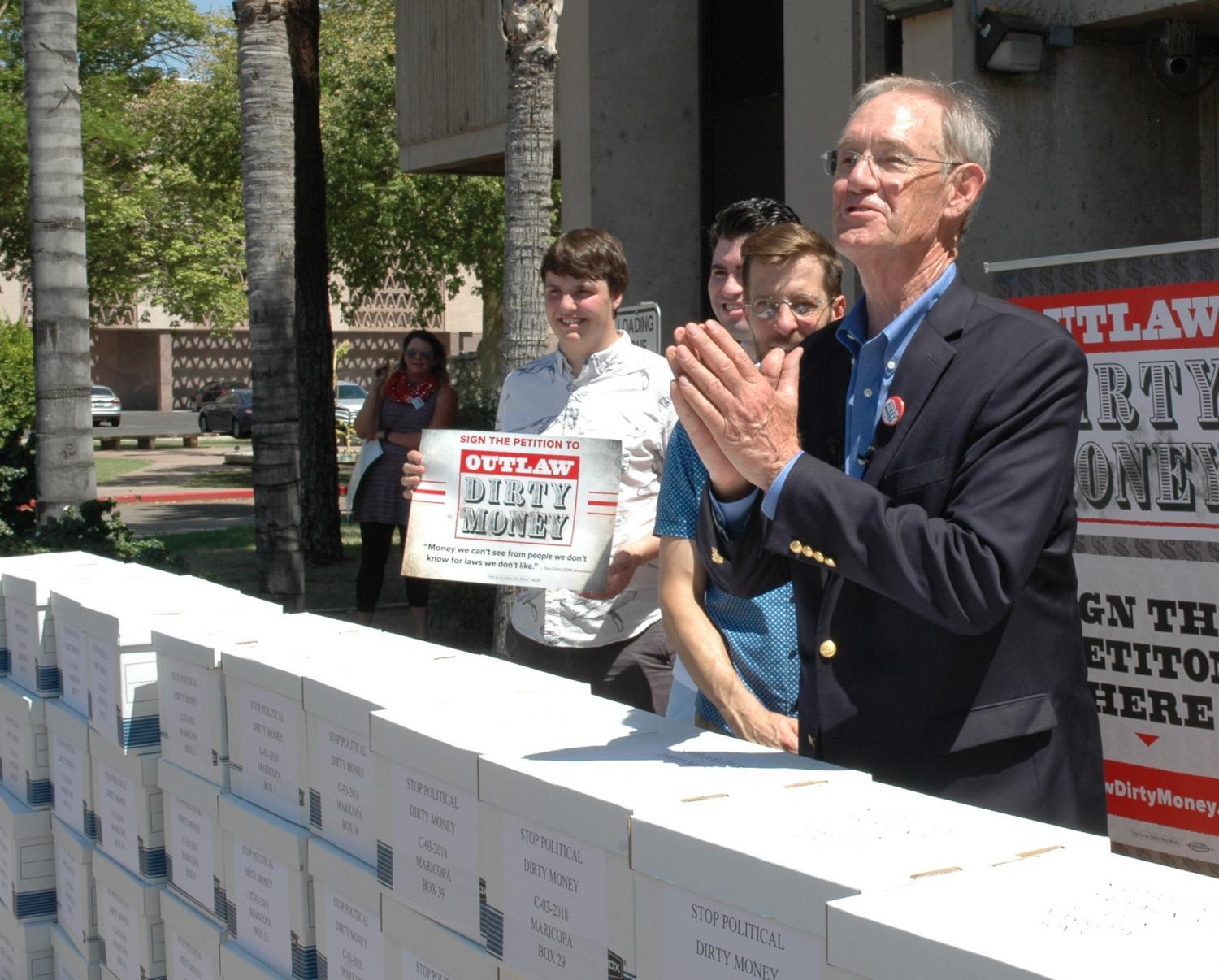 Howard Fischer/Capitol Media Services
Terry Goddard in 2018 with boxes of petitions for an initiative to ban "dark money" in politics.

But it has been the Republicans in the Legislature who have allowed for anonymous donations.

During 2016 debate on the legislation, Rep. J.D. Mesnard, R-Chandler, said voters don't need to know the source of the funds paying for those TV ads, mailers, billboards, phone calls and literature left at the door.

And Mesnard said during the debate that sometimes too much disclosure can be a bad thing.

"The end result is a registry of every person and who they donated to,'' he said. "I think that is entirely dangerous.''

But Goddard said out that while the U.S. Supreme Court opened the door to these third-party campaigns in a 2010 ruling, that was never meant to be a license for donors to hide their identity. He pointed out that then-Justice Antonin Scalia said nothing in that ruling should be seen as an invitation for anonymously financed political commercials.

"Requiring people to stand up in public for their political acts foster civic courage, without which democracy is doomed,'' Scalia wrote in a concurring opinion.

Howard Fischer of Capitol Media Services contributed to this report.

EDITOR'S NOTE: The headline and story has been modified to clarify the status of the ballot initiative.