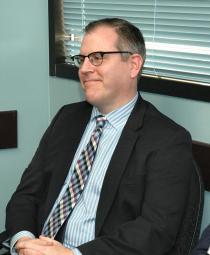 The executive director of the Arizona Corporation Commission is out after utility regulators found out that his wife is working, at least indirectly, for Arizona Public Service.

His wife, Annie Vogt, worked for Veridus, a lobbying and public relations firm hired by APS to fight a ballot initiative that would require all utilities to generate half their power from renewables by 2030.

Commissioners say they didn’t know about Annie Vogt’s job until the lobbying firm had already been working on behalf of APS for months.

Commission Chairman Tom Forese, in a letter to Vogt earlier this week, said he was hired to rehabilitate "the structure, administration and image of the commission.''

But Forese was not alone, with Justin Olson saying he believes that Vogt needed to either get rid of the conflict — a move that would have forced his wife to leave her job with Veridus — or leave the commission.

In his letter of resignation, Vogt said he, "strives at all times through my words and deeds to honorable advise the elected members of this public body.'' Vogt said he only now has become "aware of concerns'' about conflicts of interest.

He said any failure to inform commissioners was "unintentional.''

"But I also know that perceptions matter,'' Vogt wrote.

Under current law and constitutional provisions, it is the commission that not only sets rates for investor-owned utilities and cooperatives but also mandates how they operate. That currently includes a requirement to generate 15 percent of their power from renewable sources by 2025.

The initiative being fought by APS would constitutionally override that, requiring utilities to provide 50 percent of electricity from renewable sources. And it would bar companies from counting their nuclear power toward meeting that goal.

Vogt is a former Tucson Republican lawmaker, having been named to the House of Representatives in 2010 by the Pima County Board of Supervisors to replace Frank Antenori who had been appointed to the state Senate. He won a full two-year term of his own later that year but lost his reelection bid in 2012 after legislative district lines had been redrawn.

After that he held various political positions for Republican Govs. Jan Brewer and Doug Ducey before being hired by the all-Republican commission as its top staffer last year.

EDITOR'S NOTE: This story and headline have been modified to correct the title of Ted Vogt.